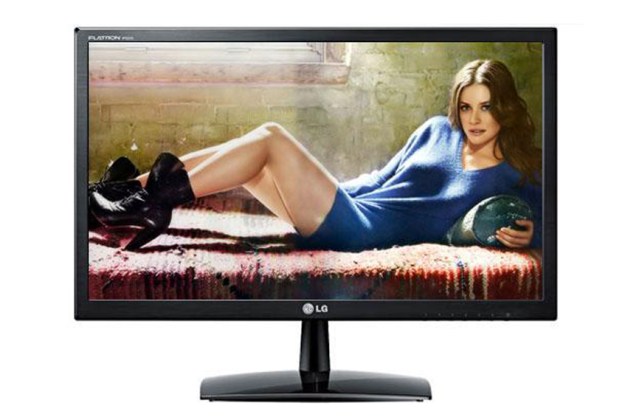 “While it’s not the brightest monitor in this price range, its broad color spectrum and surprisingly sound out-of-the-box calibration make it a good fit for anyone concerned with viewing images as they’re supposed to appear.”

If you didn’t already have enough trouble sifting through terms like LCD, TFT and LED when shopping for a monitor, a new term has cropped up to further complicate your search: IPS.

Priced at under $250, this 23-inch IPS LCD monitor hits a reasonable price for the display technology at work within, but still promises to outperform competitors using inferior twisted-nematic (TN) technology. But does it cut corners in the process? We fire it up to find out.

Despite LG’s best efforts, the low cost of the IPS235 comes through in its no-frills design. Compared to the opulent translucent plastics and capacitive touch buttons of a high-end Samsung monitor, or even a classy HP like the x2301, the IPS235 looks quite pedestrian. But it’s more plain than homely.

The 23-inch display is wrapped in a plastic bezel that can almost pass for brushed aluminum (until you touch it) and the base is a simple gob of gloss black plastic with an arm shooting out of it. Like most displays in this price range, you can only tilt the display back a bit and forward a bit; no swiveling, rotating or raising it up and down.

Fortunately, going cheap does have its advantages. LG opted for clicky physical buttons hidden out of view below the bezel to control the on-screen display (OSD), which we actually prefer to capacitive touch buttons. LG also used the plain, slab-like back to its practical advantage and added holes for a VESA mount. And that simple base? It does its job. There’s no wobble to the IPS235 at all.

While the full depth of the display comes to 2.3 inches in the middle, LG tapers that to the edges to give it a much sleeker look — more like half an inch.

Swivel the IPS235 around and you’ll find VGA, DVI, and HDMI video ports, plus a headphone jack to tap audio from a connected HDMI source, if it provides it. Since it has an integrated power supply, the IPS235 accepts a standard (included) power cable similar to what you would use with a desktop computer — no power brick necessary.

Like almost all monitors in the 23-inch size class, the IPS235 offers 1080p resolution, giving it pixel density of 96 pixels per inch — a reasonable size for legibility on the desktop. According to LG, it delivers 250 cd/m2 of brightness and 5,000,000:1 dynamic contrast ratio (this second number is a fairly meaningless marketing ploy). The IPS display tech also makes itself apparent in the claimed viewing angle of both 178 degrees horizontally and vertically. However, response time is a relatively high 14ms, indicating that fast-action games and movies could be a concern.

When powered up, the lower right-hand corner of the IPS235 lights up with a blue arc to let you know it’s alive. Six hash marks to the left designate where you’ll find buttons hidden below the edge, any of which will bring up the on-screen display (OSD). From here, you can access the adjustment menu, switch modes, inputs or auto calibrate with a single touch. LG also offers “dual package” mode, which offers some perks for those intending to use the IPS235 as a second monitor in Windows. For instance, you can easily fling windows from one screen to the other with a tap. This requires installing LG’s Dual Package software for Windows, a small package you can download online.

Digging into the menu controls, the IPS235 allows you to fine tune many aspects of the display. That includes standards like brightness, contrast, and sharpness, along with a few more advanced controls. For instance, you can tweak the RGB levels individually, but also switch to a six-color calibration mode, manually change the gamma, and set black levels. The buttons press down with a satisfying click, and the interface was intuitive enough that all our selections did what we intended the first time around with much guesswork.

Right out of the box, the IPS235 flicks on with a surprisingly balanced picture that’s quite a departure from what we’ve come to expect from the artificially juiced monitors prepped for show floors. Most users, we dare say, will be content without playing around with anything except setting the color temp to “warm.” We calibrated the display with a Spyder4 Elite to remove a slightly bluish cast.

After compensating for this slight shift, color reproduction from the IPS235 is excellent. True to the promise of its IPS panel, it reproduced 97 percent of the sRGB color spectrum in testing — an impressive feat for a monitor in this price spectrum. If you’re looking to do some graphic design without laying out triple the money for a pro-level monitor, you could do much worse than the IPS235. The rest of us can just enjoy seeing desktop backgrounds, movies and images on the Web with deeper shades and more refinement than you’re used to getting from a TN panel. For instance, our banding tests showed a smooth gradient transition from black to white with no visual “bands” of colors between.

The IPS235 tends to “crush” blacks to some extent, which can lead to dark grey details in an image getting lost in any inky abyss. We had trouble distinguishing the 1 through 5 values on the RGB scale, which is below average for this tier of display.

While it won’t sear your eyes, the IPS235 is plenty bright for most indoor use. LG promises 250 candelas per meter squared (cd/m2) in brightness from the IPS235, and in testing it came very close, at 245 cd/m2. The LED backlighting arrangement also produced some variance in brightness, most notably in the upper left-hand corner, where we measured brightness 14 percent lower than in the center. Fortunately, most users won’t notice any discrepancy in brightness in actual usage.

The display’s matte finish deprives it of the “pop” you might find on flashier monitors with a hard gloss coat, but also does an excellent job shirking glare. We had no issues using the IPS235 even in a brightly lit office beside large windows.

While the 14ms response time on the IPS235 suggests it may have trouble keeping up with the fast action in movies and games, we never experienced issues, even viewing the same videos side by side with TN displays rated for much faster response times. No ghosting or “comet tails” on fast-moving objects. Between that and the lack of discernible input lag, we feel safe saying even fickle gamers will be totally satisfied with the IPS235.

LG’s IPS235 carries the cachet of true-to-life IPS color without the cash outlay of spendier competitors. While it’s not the brightest monitor in this price range, its broad color spectrum and surprisingly sound out-of-the-box calibration make it a good fit for anyone concerned with viewing images as they’re supposed to appear. The rather dull bezel and stand can be overlooked for the price tag, though we do wish the IPS235 did a better job displaying near-black.