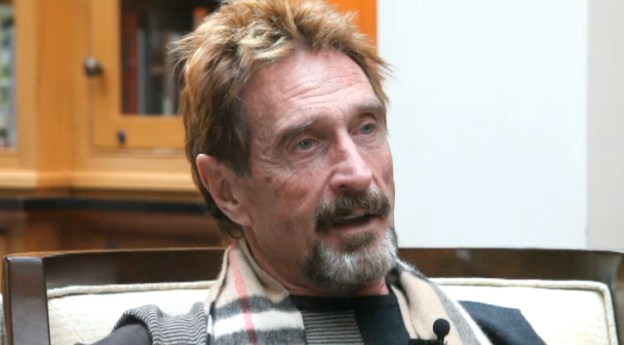 A news team from the UK recently caught up with the eccentric software pioneer, multi-millionaire and “person of interest” John McAfee.

McAfee was back in the news late last year following the mysterious death of his neighbor in the Central American country of Belize where he lived. Local police wanted to question him about the incident as “a person of interest”, but claiming the authorities were attempting to frame him in retaliation for his accusations of corruption, McAfee fled to Guatemala before being deported to the US.

Channel 4 News’ Inigo Gilmore caught up with McAfee in Portland, Oregon, where he’s currently living. The 12-minute report mixes documentary film of his bizarre five-week journey from Belize to the US via Central America with short snippets of interview footage.

“Is McAfee a successful entrepreneur who went mad while living in the jungle and surrounded himself by guns and became paranoid and killed his neighbor?” McAfee muses in the report, “Or is he the potential savior of America or did he just act out the greatest mind f*ck of all time.”

In a taxi journey through Portland near the beginning of the report, McAfee, possibly in an attempt to make himself look a little less odd, tells Gilmore about an “astonishing” local man “dressed all in blue, including his face, his beard, his hair, his hands.”

“At this point I was wondering just what I’d left myself in for,” Gilmore quips.

The report makes mention of an animated series and two movies in the works, one of which is described by McAfee as “James Bond meets Scarface with a little Indiana Jones.”

Despite asking him repeatedly about the circumstances surrounding the death of his neighbor in Belize, Gilmore says McAfee just kept returning to his “number one topic”  – his sexual prowess.

At the end of his piece, Gilmore says any discussion with McAfee about the death of his neighbor always gets lost among talk of his exploits. “But when I got up close to him and stripped away the layers from his carefully crafted persona,” the reporter concludes, “I noticed that there is an emptiness that can, it seems, only be filled by constant attention.”

You can watch the report in its entirety below.