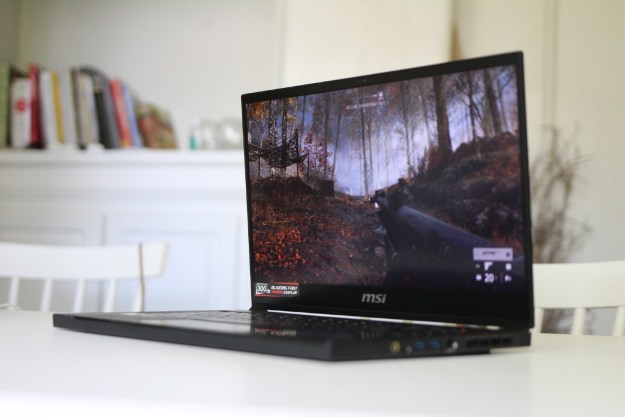 “The MSI GS66 Stealth brings excellent gaming performance and a sleek profile, all at a low price.”

The Razer Blade has always had one serious competitor. It’s not Alienware, Predator, or even ROG. Those brands all make great gaming laptops in their own right, but none that seek to do exactly what the Blade does.

Razer’s most direct rival is from a smaller company (at least here in the states). I’m talking about the MSI GS66 Stealth. It’s a similar size, has nearly identical specs, and — most importantly — shares the same minimalist design principles. No jutting angles or stereotypical gamer clichés to be found here.

MSI has evolved its approach to overcoming the Razer Blade, and its most recent model, the GS66 Stealth, seems to check all the boxes. Has it beat the Razer Blade at its own game?

There’s a fine line between simple and bland. Brands like Razer or Apple are able to play up their look with some elegance. The MSI GS66 Stealth struggles to pull off the same subtle trick. It avoids the bombastic style of other gaming laptops, but isn’t quite as refined as laptops like the Razer Blade. Even some ROG Zephyrus laptops have a more consistent look.

It’s not a bad-looking laptop. It’s just a bit dull.

MSI has even reeled the design back from last year’s GS65 Stealth, removing the gold highlights that played up the racing stripe theme. It’s now colorless, outside of the RGB keyboard, keeping to the standard aluminum chassis, painted black. Unfortunately, there are still vents along the sides and across the top of the keyboard deck, stickers across the palm rests, and large hinges. It’s not a bad-looking laptop. It’s just a bit dull.

Fortunately, MSI has fixed some issues with build quality. Previous models were equally thin and light, but felt flexible and cheap. It’s no longer a bendy piece of plastic, though the lid still feels a bit wobbly. Even when closed, my unit’s lid could shut flat due to its curve.

For a laptop that is just 4.6 pounds and 0.71 inches thick, that’s important. It’s still not as well-constructed as the similarly sized Razer Blade, though, which remains the king in this department.

The keyboard and touchpad fit that theme. It’s a large, comfortable keyboard with a set of springy keys that are as good for typing as they are for gaming.

There are quirks in the keyboard layout, however. The function key is only located on the right side, probably for close proximity to the full-sized arrow keys, which also double as volume and screen brightness controls. Weirdly, though, it’s only half the size of a normal key. That’s a bad decision for a key that’s commonly used.

I was genuinely surprised by the quality of the touchpad.

The keyboard does feature RGB backlighting, which is requirement for gaming laptops these days. You have per-key customization, leading to fun designs, all courtesy of Steelseries. The backlighting isn’t as bright and consistent as the Razer Blade’s, however.

The touchpad is wider than in previous models. Unlike the larger MSI GS75 Stealth, this one doesn’t get in the way of your palms while typing. It’s shorter than what I’m familiar with, though, because of the large vents above the keyboard. The good news is the touchpad tracks well, and the click mechanism is quiet and precise. I was surprised by the quality.

The MSI GS66 Stealth includes a 720p webcam above the display, as well as an IR camera for Windows Hello facial recognition.

The MSI GS66 Stealth offers plenty of options for port connections. On the left, you get USB-A, HDMI, Thunderbolt 3, and a barrel plug power port.

On the right side, the GS66 Stealth offers two more USB-A ports, an additional USB-C port, an Ethernet jack, and a headphone jack. That’s everything you need to hook up multiple accessories, output to an external monitor, and even hardwire your internet connection.

The lack of a full-sized SD card slot is a miss for creatives who may want to use this laptop as a photo- or video-editing machine. The slot has made a comeback on the new Razer Blade and Dell XPS 15. With the MSI GS66 Stealth, you’ll need to resort to a dongle.

The positioning of these ports is a little annoying. Because of the air vents along the side, the ports have been pushed down toward the palm rests. As it turns out, that’s right where your mouse usually is.

The MSI GS66 Stealth supports the latest Wi-Fi 6 connectivity through Intel, as well as Bluetooth 5.1.

Like the Predator Triton 500 or Razer Blade, the MSI GS66 Stealth features not only an Nvidia RTX 2080 Super Max-Q graphics card, but also a 300Hz refresh rate screen. The combination of the two means strong GPU performance and a screen that never limits the amount of frames per second you can see. The MSI model also offers screens at 240Hz or 144Hz refresh rates when matched up with slower GPUs like the RTX 2070 Super or RTX 2060.

My decked-out review unit, though, was a top performer. Take Battlefield V, for example. The MSI GS66 Stealth handles the game at 97 frames per second (FPS) with settings at Ultra, and 133 fps at Medium. It’s neck-and-neck with the Razer Blade here, and even surpasses it at the Medium settings by 11 fps.

The Razer Blade, Predator Triton 500, and MSI GS66 Stealth were also in a dead heat in Assassin’s Creed Odyssey. The MSI GS66 Stealth played at 56 fps, only a few frames behind its two rivals.

Trading blows again, the GS66 Stealth plays Fortnite wonderfully smooth, making better use of its 300Hz screen. It hit a whopping 121 fps with settings at Epic, again ahead of the Razer Blade by 11 fps.

And in case you’re wondering, there are some titles that can actually use the extra frame rate headroom that the 300Hz screen provides. Rocket League, for example, can easily play up to its maximum of 250 fps.

All these games were played at the system’s native 1080p resolution, though you’ll likely get decent frame rates while plugged into an external 1440p gaming monitor as well.

As with the Razer Blade, many people will be tempted to use the MSI GS66 Stealth for more than just gaming — thanks to its portability and nondescript design.

MSI offers processor options up to the Intel Core i9-10980HK, but my unit came with the Core i7-10875H. This has become the go-to option for high-end gaming laptops, featuring eight cores and 16 threads. That makes it a strong content-creation laptop as well, especially in applications that can use the powerful discrete GPU.

The GS66 Stealth scores better than the Razer Blade in Geekbench 5, but in real-life professor performance, they’re equally matched. For CPU-bound applications like Handbrake, it ties the Razer Blade and loses to the Dell XPS 15. Of course, laptops like the AMD Ryzen 4000-powered Dell G5 SE or Dell XPS 17 blow it out of the water.

A better example is the popular video-editing application Adobe Premiere Pro. The MSI GS66 Stealth finished a render of a 4K two-minute clip to ProRes 422 in just seven minutes and 20 seconds. Again, that’s almost identical performance to the Razer Blade. Thanks to their more powerful GPUs, both of these laptops beat the Dell XPS 15 by about 16%. None of these compare to the powerful Dell XPS 17, though.

The system does a solid job keeping the surface temperatures cool, even while gaming. That’s a problem I had with the Razer Blade, which tends to stay warm, even in light web browsing. The cooling is better-controlled here, which results in more comfortable surface temperatures. The trade-off, of course, is the additional vents and fan noise. Even at idle, the fans are always spinning.

The matte 1080p screen is fantastic for gaming, thanks to its 3 millisecond response time and 300Hz refresh rate. Gaming is fast and fluid.

For other activities, it’s only serviceable. The screen maxes out at only 262 nits, for starters. That’s 15% dimmer than the Razer Blade, and under the 300-nit level I expect from premium laptops. The matte finish helps temper reflections, but I would have liked to see a brighter screen here.

Fortunately, it’s a well-calibrated screen with accurate colors. The color gamut isn’t as wide as many creatives will want, but it matches the 1080p Razer Blade in this regard. MSI does offer a 4K panel, which may be more attractive for tasks outside of gaming.

The speakers are disappointing. They’re pointed upward, though MSI decided to again place them on the palm rests, which remains an odd choice. Either way, they’re muddled, and lack any bass whatsoever.

The MSI GS66 Stealth is in step but not ahead of many of its rivals in several areas. One exception to that rule is battery life, where it pulls ahead. I don’t mean that it can compete with nongaming laptops, though.

It still only manages around five and 40 minutes on a single charge — and that’s on a light web browsing load. You can’t work away from the wall for too long without worrying about battery life. The Dell XPS 15, even with its 4K display, lasts a couple hours longer on a single charge in this same test.

The Razer Blade did beat the MSI on our very lightest battery test, which loops a local video clip until the laptop dies. The Blade lasted seven hours and 22 minutes, an hour longer than the MSI GS66 Stealth.

There is some rising competition in gaming laptop battery life, however, and that’s the new crop of AMD Ryzen 4000 gaming laptops. Its GPU isn’t as powerful, but the ROG Zephyrus G14 inches past the MSI GS66 Stealth in web browsing, and lasted a whopping 10 hours in video looping.

The MSI GS66 Stealth faces an uphill battle. It lacks the refinements of the Razer Blade, and isn’t as affordable as the Acer Predator Triton 500. Its advantages don’t go unnoticed, though. The cooling is impressive, and the gaming performance is fantastic.

It doesn’t double as well as the Razer Blade does for work, but as an ultra-portable gaming laptop, the MSI GS66 Stealth makes a case for itself.

The Razer Blade has superior build quality, a better display, and a classier look. It’s a few hundred dollars more expensive, however.

The Predator Triton 500 isn’t as sleek as the MSI GS66 Stealth, but it’s a bit cheaper, and even includes a G-Sync screen.

If you’re considering the cheaper Nvidia RTX 2060 version of the MSI GS66 Stealth, the ROG Zephyrus G14 is a strong alternative.

The MSI GS66 Stealth should last four to five years, as long as you take care of it. The build quality can be a little delicate in places, so be careful with how you handle the lid.

MSI offers a standard one-year warranty for all laptops.

Yes. If the Razer Blade is a bit too expensive, and if you still want a sleek gaming laptop, the MSI GS66 Stealth is a good option.