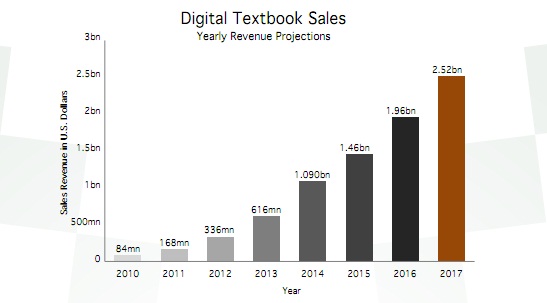 Textbooks are the bane of every college kid’s existence: They’re expensive, heavy, half the time you end up using them once, your professors’ insist on going off book, and when all’s said and done and you try to sell them back,  you’re gifted with a fraction of what you originally paid. There might be some good news in site for you aching joints and fraying backpack straps. According to Xplana, one in four college textbooks will be digital by 2015.

Xplana is a social learning platform that “redefines ‘social studies’ by allowing you to do all of your studying and social networking in one spot.” It’s a site featuring a bevy of social networking of the education variety, as well as 100,000 free academic resources. Of course, it gets pretty social by integrating your Facebook, Twitter, and other social networking platforms so that whilst you are bettering your career aspirations you can also check out who posted pictures of your from last night’s kegger. That said, Xplana gives students access to site’s they regularly would have to pay a hefty price for, and databases that seem to have endless requirements for registering.

So you might want to take that into consideration when the entirely Web-based site claims that in a mere five years a large percentage of college textbooks will do away with print in favor of digital. But According to Xplana, the rate of colleges turning to e-textbooks makes it look as if sales will grow as much as 80 to 100 percent in the following years, and that by 2015 students will be lugging fewer and fewer tomes with them to class. The report also notes that as these devices increase in quality and affordability, their acceptance in classrooms only seems natural. Print costs and annoyance are not the only factors at play here, either. The popularity of the iPad and saturation of the tablet market in general is winning over college educators and higher ups.

If tablet and e-reader devices were adopted in favor of printed textbooks, students and schools could save on the costs of updating the physical things on a yearly basis. Of course, publishing and printing companies would take a hit. To which we hear the collective snickers of college students shelling out hundreds of dollars on books say “suck it.”

Topics
Best iPad Deals for January 2023: Latest models on sale from $299
Microsoft Surface Pro 9 vs. Lenovo IdeaPad Duet 5i: which 2-in-1 is best?
Amazon is having a flash sale on Apple – AirPods, iPad, Apple Watch and more
3 cool things to try out with Apple’s Freeform app for Mac
The best PC power supply for 2023
ChatGPT has a new way to detect its own plagiarism
Samsung Galaxy Book 3 Ultra vs. MacBook Pro 16-inch
The Galaxy Book 3 Ultra is Samsung’s most powerful laptop ever
Nvidia may have another monster GPU in the works, and the price could be outrageous
AMD’s Ryzen 9 7950X3D pricing keeps the pressure on Intel
What is ChatGPT Plus? Everything we know about the premium tier
ChatGPT Plus to bring priority access during peak times — at a hefty price
Usually $3,879, this Lenovo laptop is down to $1,479 today