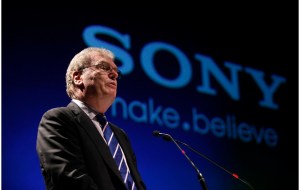 Moods have surely improved around the Sony offices now that the company’s online services have been restored following the April attack that left PlayStation Network, Qriocity and Sony Online Entertainment down for almost a month. Company CEO Howard Stringer was downright apologetic when he spoke publicly about the outage at the start of this month, but now that normalcy is returning he’s taken a more aggressive stance toward critics of Sony’s week-long delay between shutting down online services and letting customers know that their personal data had been compromised.

“Most of these breaches go unreported by companies,” he said during a press briefing this week (via Gamasutra. “Forty-three percent notify victims within a month. We reported in a week. You’re telling me my week wasn’t fast enough?”

He carried that same perspective into a later interview with Bloomberg. “There is no precedent for this in people’s experience,” he argued. “Most reports now seem to indicate that we acted very quickly and very responsibly.”

Critics have argued that the gap between the Sony services being taken offline on April 20 and the company’s official statement on April 26 notifying customers that their personal data had been compromised was too long. Sony counters that the week delay can be attributed to the time taken in ascertaining the extent of the damage. Critics, on the other hand, contend that a statement to customers should have accompanied the outage on April 20, as every customer has a right to know if there’s even a possibility that his or her personal information — including credit card data — may have been stolen.

There’s no clear right or wrong answer here, it comes down to what your personal opinion is. Sony certainly acted quickly in bringing down its online services, but placing blame on the decision to not prematurely cause a panic is much more open to discussion. Stringer calls this incident a “hiccup in the road to a network future.” Do you agree? Or are these merely the words of a company CEO trying to protect his business interests?

Topics
New lawsuit hits Sony, says company ignored security warnings
Sony launches sign-up page for free identity theft protection following network breach
Sony BMG Greece website hacked, user data revealed
Sony hacked once again, phishing site found on server
The best PC power supply for 2023
ChatGPT has a new way to detect its own plagiarism
Samsung Galaxy Book 3 Ultra vs. MacBook Pro 16-inch
The Galaxy Book 3 Ultra is Samsung’s most powerful laptop ever
Nvidia may have another monster GPU in the works, and the price could be outrageous
AMD’s Ryzen 9 7950X3D pricing keeps the pressure on Intel
What is ChatGPT Plus? Everything we know about the premium tier
ChatGPT Plus to bring priority access during peak times — at a hefty price
Usually $3,879, this Lenovo laptop is down to $1,479 today