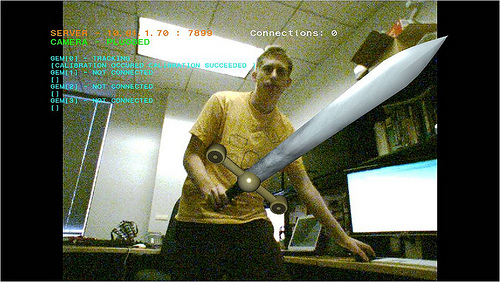 Today Sony announced its new Move.Me application, which will allow select individuals to get their own hands on the capabilities of its motion-based gaming technology. “PlayStation Move’s camera-plus-controller combination allows for the most precise and immersive gaming experiences,” senior engineer of SCEA developer support said in a statement today. “Now we’re formally taking that advanced technology, which was almost 10 years in the making, and offering it to innovators outside of our traditional game development community so they can create their own applications to impact the world in exciting new ways.”

Before any PlayStation deviants out there get too excited, notice the “innovators” keyword. By that, Sony means industry insiders and academics. PlayStation has been treading carefully on this ground, especially considering it’s currently in the throes of battling PS3 hackers and banning console imports.

Maybe pressure from competitors has been making Sony consider a more open platform. Microsoft recently announced it would release the Kinect SDK after seeing what hobbyists were capable of creating. Microsoft has taken incremental steps since initially threatening legal action against Kinect hackers, ultimately trying to put itself in the favor of their ingenuity. Up until now, Sony hasn’t been quite as lenient. Aside from one member of the Move team saying he’d like to see what this technology could do in the right hands, the only commentary Sony has made on hacking is that it really, really doesn’t like it.

It seems that last month’s DICE Summit in Las Vegas did hint that something was in the works. We reported that a session at the conference would “bring developers up to speed on developer for the PlayStation Move controller…We will discuss the new Move Server project that will make it possible for academics and hobbyists to developer software.” In Sony’s press release from GDC today, it makes it explicitly clear who it considers expert enough to gain such a privilege. “A handful of prestigious researchers and professionals in the medical, academic and human-computer interaction fields have already expressing interest in creating innovative applications that leverage the unique motion-sensing technology offered by PlayStation Move.”

It doesn’t sound like your local PS3 modders will be handed the Move SDK just yet. But don’t give up hope: Sony has notoriously fought hackers, so consider this a baby step in the opposite direction.

The best game-streaming services for 2022

The best Xbox One headsets for 2022

The best capture cards for 2022: Xbox, PlayStation, and PC