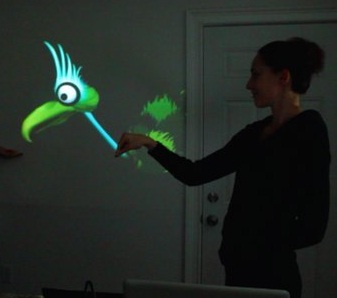 From the moment Kinect hit shelves, people starting tearing it apart (literally, not figuratively). While the idea of a controller-free, motion-detection gaming device is an exciting one, hacking that device to pieces and exploring its full capabilities is what really seems to have gotten hold of the tech community.

No sooner had it been announced that a developer had hacked Kinect to run on a PC, than Microsoft voiced it was very disappointed in its users. But contests urging developers to push Kinect to its limits continued to pop up, doing little to help the company keep its latest product’s original form intact.

As more and more Kinect hacks turn up, and as they get more and more innovative, the company is doing a 180. In an interview with NPR, Microsoft’s Alex Kipman claims that developers purposefully made Kinect open source so that users could modify it – which completely contradicts its original reaction to the hacks, in which the company said “Microsoft does not condone the modification of its products.” Kipman also verified that even though his company previously claimed it would work with law enforcement “to keep Kinect tamper-resistant,” no one is going to be punished for any adjustments made to the device. The only compromise Microsoft won’t make? Calling the modifications “hacks,” as it doesn’t view working with an open source driver to be such a thing.

And good thing, because with each new Kinect “hack,” we’re seeing the device is capable of some amazing feats. Initially, finding out it could run on a PC was impressive, but it didn’t take long for this to look like child’s play. MIT’s robotics department have used Kinect to create a 3D mapping program for robotic devices. Graphic designers Emily Gobeille and Theo Watson paired Microsoft’s device with graphics software, introducing us to awe inducing 3D holographic images – and it only took them one day.

We’ve also been treated to the best imitation of a lightsaber to date. He goes by the YouTube alias Yankeyan, and using OpenKinect drivers, OpenCV, and a broom stick, he’s made dreams come true. Despite being a little glitchy and slow, it makes that $100, battery-powered replica look like a joke.

Many hacks have been focused on using Kinect to control your PC, something Microsoft is likely to create and market its own version of. But more and more, graphic artists are utilizing the technology to create jaw dropping visuals. Interactive artist Eric Gradman developed his piece, Standard Gravity, using Kinect, where you can control and shift falling squares using your body. In a similar experiment, Kinecthacks shows the ability to play a virtual piano on a PC using Kinect — it’s like that famous scene from Big, just way cooler.

So instead of scolding the programming community for hacking Kinect, the company is now choosing to support this creativity. Before, Kinect was strictly targeting gamers and Xbox users, and now Microsoft has a whole new appeal to programmers, software developers, and artists that it didn’t have before. People who may not have cared about the release of a new gaming device are now clamoring to get their hands on one – something Microsoft should be more than thrilled about. The inventiveness and amount of hacks flooding the community are astounding, and it’s safe to say we’ve only seen the beginning of what Kinect can do when in capable hands.