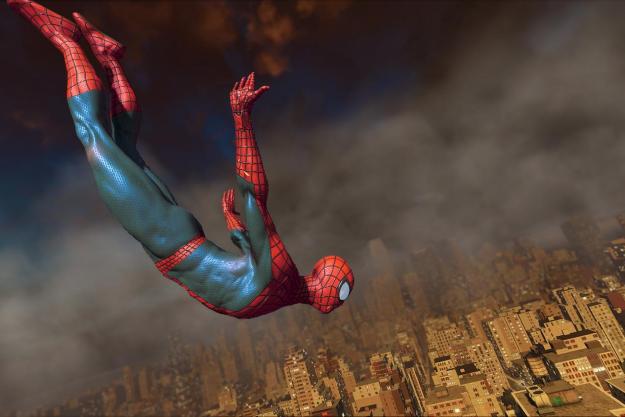 “Most of the time, the game works, and some of it can be amusing if not nourishing. It's just stupid. Very, very stupid.”

Spider-Man always bounces back. Toss a building on old Peter Parker and all he has to do is think about his Mary Jane, Gwen Stacey, or Uncle Ben and BAM! Spidey lifts nine tons of bricks off his back and throws them at an old man in a vulture costume. While Parker is crippled by psychological trauma and neurosis, he’s got a support network, people who love him, that inspire his ability to persevere.

Beenox, the studio that has steered Spider-Man through the video-game world since 2010, has no such luxury. Its developers aren’t superheroes, there is no support network, and the crush of churning out nearly annual games results in some deeply flawed Spider-Man adventures, such as The Amazing Spider-Man 2.

Like Spider-Man: Shattered Dimensions, Edge of Time, and the first The Amazing Spider-Man, Beenox’s latest isn’t exactly bad. Most of the time, the game works, and some of it can be amusing if not nourishing. It’s just stupid. Very, very stupid.

Set in a bizarre Playskool version of Manhattan populated by nothing but luxury high rises and brick tenements, The Amazing Spider-Man 2 has you slowly work your way through a gang conflict between the Russian mob and NYC’s new crime lord, the Kingpin. You’ll swing between these buildings, making your way to the next in line of the game’s 14 main chapters, which typically drop you into a stock video-game setting to punch some thugs wearing bandanas and tank tops. Tour through a dilapidated subway, museum, high-tech lab, abandoned building, or cargo-loading area, then fight the occasional boss.

Vanilla as it all is, none of it is truly awful.

Vanilla as it all is, none of it is truly awful. In fact, it can be fun. Swinging around the city feels better with the left and right triggers mapped to Spidey’s hands. That the camera loses track of the action when Spidey collides with a building doesn’t take away from it. Neither does the fact that there’s no consistency to when he can web onto a building. Giant skyscraper directly on your right? Can’t web there! Swinging through Central Park above the tree line? Swing on through!

The same goes for the combat. The simplified Arkham Asylum-style fights, with one action button for punching, one for dodging, and another for shooting webs (rather than batarangs) is sloppy but perfectly functional. Same for Spidey’s stealth maneuvers, sneaking up behind a guy and webbing him up. Will it astound video-game neophytes and grip veterans? No, but it also won’t make you throw up your hands and quit video games forever. It’s fine.

Fine, at least, until the stupidity starts to pile on. The Amazing Spider-Man 2‘s most galling problems are the lazy, dumb things that aren’t broken but don’t need to be there at all. Like giant tutorial prompts that appear on screen throughout the entire game, and can’t be turned off. Or Whitney Chang’s Daily Bugle news reports: Every single time you finish the most basic side missions like beating up gang members or saving people from a fire, you’re forced to watch a generic cutscene, each one more or less identical to the last. Same thing if you fail.

Why include these interruptions at all? Start asking questions like that while playing, and even more pop up. Why are random bombs planted in the city? Why does Stan Lee run a comic shop that Spider-Man shops at, and why is it exclusively stocked with Spider-Man comics? Why does Electro appear as a boss near the end of the game when there’s literally no prior mention of the villain before the fight? Why does Spider-Man gain experience points to unlock new moves when you never, ever need to use them for anything significant in the game?

Beenox does not have an enviable task in making these games, forced to turn them around as quickly as they must to coincide with the release of a movie. That the basics of fighting and swinging around the city work at all is impressive. That these mechanics are actually pleasantly distracting is actually pretty heroic. Like Spider-Man, Beenox has great responsibilities, but not much power or support to realize them. If only they had been told it was OK to make a simpler game. Cut all the stupid dialogue, cutscenes and bizarre fluff, and The Amazing Spider-Man 2 could have been a simpler, better game rooted in the base pleasures that Beenox got right. Unfortunately this Spider-Man game is buried beneath the rubble.

Destiny 2: Where to find Xur for the weekend of May 13