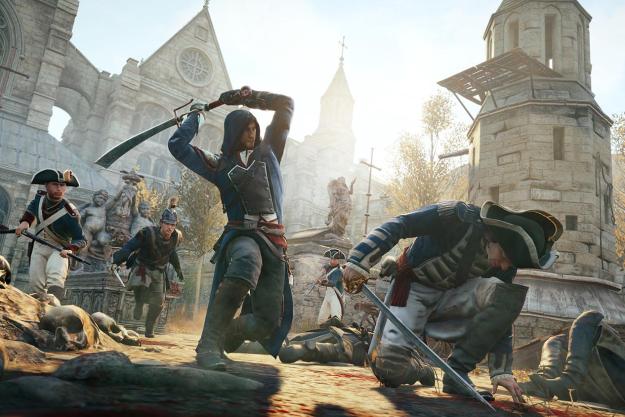 “Assassin's Creed Unity is a gaudy monument to game design by focus-testing rather than creative vision.”

All that manpower is certainly visible in Unity. The game’s yawning, French Revolution-era Paris, captured as it was at the tail end of the 18th century, is detailed to a mad degree. Every piece of stone in Notre Dame; every cobble in the guillotine-ruled square that is now home to the Place de l’hôtel de ville; even the regular old roof tiles that new assassin Arno Dorian clambers over carry a visual tactility that marks Unity as a work of modern technical prowess.

Unity is a beautiful place, full of busy little icons to walk awkwardly towards until there aren’t any left.

Arno himself is arguably Unity‘s biggest problem. That he’s the most unlikable, most thinly developed member of the centuries-spanning Brotherhood is troubling, certainly, but it’s his body that most frequently causes headaches.

The free-running controls that were so deliciously versatile when they debuted in Assassin’s Creed are infuriating in Unity‘s hyper-detailed Paris. Running through the extremely crowded streets – there are massive hordes of nicely detailed Parisians everywhere you go – Arno rarely ends up where you want him to because of the dense architecture.

There are actually two options for running: holding X on the Dualshock 4 while running sends Arno up, while holding O signals him to go down, sliding under tables or lightly hopping over ledges rather than climbing them. At least In theory.

In practice, Arno constantly snags on inconvenient pieces of the world. Running from bayonet-wielding guards that can kill you in just a couple of stabs? Heading straight down the street and up your theater headquarters’ roof seems like a good strategy, but Arno may decide to climb the nearby streetlight instead, shuffling in a circle around it while you slam the O button trying to get him to drop.

Navigation woes like these cause problems even when trying to stealthily reach an assassination target. Many of Unity‘s story missions have you infiltrating opulent mansions during parties or public squares during protests. Thankfully the scores of partygoers and protesters crowd together in groups that you can blend with, which makes sneaking up on guards easier and more natural than in the past. But if you need to slip out a window or take cover behind a bush, Arno’s bound to get in a fight when he’s spotted because the controls won’t do what you want.

At least those fights are the easiest route to success. There are always options for a more stealthy kill, theft of secret Templar plans, or for escorting a VIP, but the finicky environmental detection often makes a direct assault more palatable. Sticking to the Assassin Brotherhood’s creed of not killing innocents goes out the window when the assassin is constantly spotted because they’re stuck on an actual window.

Unity‘s fencing (and pikeplay or heavy swordplay, depending on your preference) feels soft and imprecise compared to the crowd control battles in games like Arkham City and Shadow of Mordor. Mashing the attack button after rolling away then dropping a smoke bomb is messy and rarely feels gratifying, but it gets the job done.

Assassin’s Creed Unity may be an incredible piece of architecture, but that’s sadly all it is.

That’s especially true in Unity‘s cooperative missions. Never intruding on the story, but available from very early in the game, you can take on a variety of missions in teams of up to four. Many require only two players, but some can be played by yourself, which demonstrates how distinct they are from solo missions.

The primary difference between single and multiplayer missions is that the multiplayer missions simply have more powerful enemies appearing in greater numbers. One co-op mission tasks you with sneaking around a hedge garden pickpocketing soldiers. It’s handy to have a partner, but not essential.

Sometimes, the co-op missions don’t even work properly. Playing with three other assassins during a session three days before release, the mission “Food Chain” wasn’t beatable because the AI-controlled assassin contact wouldn’t move after we defended her from an attack. Yes, that can (and surely will) be addressed in a patch, but it wasn’t an isolated incident.

All of these technical problems wouldn’t necessarily damn Unity if there were a soul beating inside its 18th century urban body, but there’s a dire lack of life in the game. The mechanical flaws are so glaring because Paris itself feels dead.

No matter what you do during the course of a mission, nothing in the streets really changes. Arno’s constantly given random opportunities to scare of criminals and tackle thieves, but the citizens of Paris don’t react or behave differently as a result. Some side missions let you solve murders alongside famed detective Francois Vidocq, but even these equate to little more than following glowing icons and collecting more money just to watch an overall completion meter fill.

Collecting treasure chests and icons, hunting down glowing murals so Arno can unlock a fancy suit of armor, none of it culminates into an evolving journey. Compared to a living world like Shadow of Mordor, with its lively orc army, even Unity‘s crowded city feels lonely and empty of fulfilling tasks.

Rich, flawed characters could have saved Unity, but the story invests minimal emotion in developing Arno and his Templar love Elise. Arno’s father, an assassin seeking peace with the Templars, is killed when our hero’s still a boy. Elise’s father, the Templar helping to broker the peace, takes Arno in until he’s an adult, but he’s assassinated when Arno fails to deliver a warning to him in time. After a convenient meeting with gruff assassin Bellec in prison, Arno takes up ye olde hoodie and wrist-knife, eventually teaming up with Elise to avenge both their fathers.

Many of Unity‘s story missions have you infiltrating opulent mansions during parties or public squares during protests.

Their tale has as much emotional depth as that dry description suggests, with dramatic dialogue and confrontations boiling down to little more than exposition dumps. When Arno and Elise express their love, when Bellec and Arno inevitably confront one another, their relationships are meaningless because we’ve never seen them really form any meaningful bonds. Elise and Arno love each other because Unity tells us so. That’s it.

The entire conflict between the Templars and Assassins ends up feeling like an afterthought. The meta-narrative of a present day player diving into memory simulations of past assassins on behalf of the Templar-backed company Abstergo peeks its head up every now and again, but it’s more confusing than anything else.

After a flummoxing intro sequence, an assassin hacker named Bishop pops in to recruit you to the hoodie cause, leading into Arno’s initiation as a noble killer. But throughout the whole introduction to his story, you never find out why the Assassins or Templars even do what they do. When she asks if you want to sign up, there’s no narrative motivation for the characters. The assassins are good guys because Unity tells you so. Again, that’s it.

Hints of a more daring game pop up after every third of the story is completed. Abstergo starts trying to hunt you down in the simulation, forcing you to dive through portals into unstable simulations of Paris during other time periods, like an assault on the Bastille in the 14th century or a World War II-era showdown with occupying Nazis.

They’re eerie set pieces with ghostly figures wandering through the action, and the notion of having to escape through half-formed memories is a legitimately new place to take Assassin’s Creed’s shaggy dog conspiracy tale after so many years. Those interludes are ultimately meaningless, though, just straight corridors to run through before getting back to the big map’s busy work.

That’s all Unity ultimately is: a beautiful place full of busy little icons to walk awkwardly towards until there aren’t any left. That the story and the basic physicality don’t work particularly well is besides the point when there’s simply so much to do! That seems to be the philosophy driving the design, at any rate.

Every mission ends with an option to rate it, to give Ubisoft feedback on whether or not you liked what you just did. But there’s no feedback button for saying you want a likable character, or for the Parisian populace to feel like more than moving scenery. How appropriate that Unity visits Versailles just before its fall. Like Louis XIV, Ubisoft has used its signature series’ fortune to erect a gilded artifice, a gaudy monument to game design by focus-testing rather than creative vision.

This game was reviewed on a PlayStation 4 using a disc provided by Ubisoft.