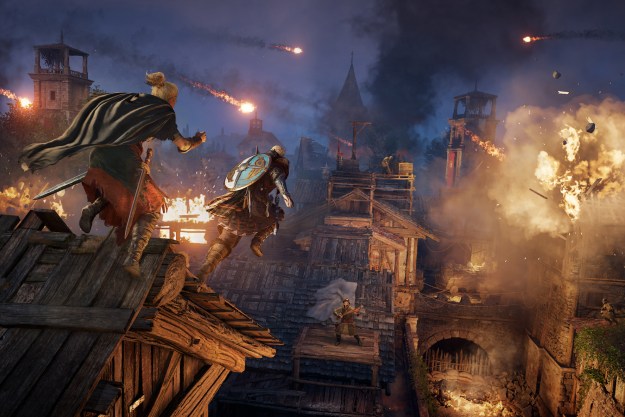 Assassin’s Creed Valhalla Siege of Paris review: Everything is the same
Score Details

For me, the Assassin’s Creed franchise is about traipsing through historic areas, speaking to the icons of the time, and sometimes murdering them. In Odyssey, players get to venture through the brilliantly colorful world of ancient Greece, meet brilliant mathematicians and philosophers, and explore ruins that still stand today.

Assassin’s Creed Valhalla drops the ball in that regard. Its world, while normally beautiful, is hardly filled with recognizable characters and set pieces. Valhalla‘s base gameplay loop doesn’t do much to offset that issue either, stagnating after the first couple of times through it. However, the game’s Siege of Paris expansion takes all of its current issues and amplifies them, resulting in a prime example of how bloat, repetition, and general boredom can ruin an expansion.

The Siege of Paris DLC kicks off with two new characters arriving in Ravensthorpe, warning Eivor of a mad Frankish king that could, one day, sail to the shores of England and destroy what they’ve built. With the potential threat, Eivor decides to sail to Paris to convince the mad king, Charles the Fat, to leave England alone, one way or another.

From the first time you set foot in Paris, things are obviously different in Valhalla. The picturesque land is bloodied and burnt, with Charles’ forces destroying everything Nordic in their path. In these opening moments, Paris isn’t colorful or beautiful. It’s dead, and it’s a fitting introduction as players dive into the expansion’s story of revenge and how religion can warp people’s minds.

However, this promising story is told through some of the most irredeemable, poorly written characters I’ve encountered in an Assassin’s Creed title. Charles himself is a madman, steeping to levels of depravity that, by the DLC’s end, are difficult to forgive regardless of one’s viewpoint. Of course, his wife (a good Christian whom he attempts to kill multiple times) is an apologist, believing that he can be saved, and the game eventually tries to push players in that direction too.

Likewise, the Viking leader Sigfred, who leads the siege against Paris, is a rage-filled maniac, which shouldn’t sound too strange for a Nord invader. In fact, Sigfred is one of the easier characters to sympathize with early on. That’s all taken away after he commits (and I cannot stress this enough) war crimes during the siege of Paris. There is a reason why some of the more brutal aspects of Viking life — the rampant murder and pillaging — are left out of the game’s main story. Assassin’s Creed Valhalla takes a strong stance on what is right and wrong, even with Vikings as the main characters, and Sigfred falls sharply on the wrong side.

There aren’t any characters to get attached to, nobody that you’ll miss once the credits roll after around eight hours.

Naturally, there are some enjoyable characters in The Siege of Paris, but they can’t save the game’s overall poor cast. There aren’t any characters to get attached to, nobody that you’ll miss once the credits roll after around eight hours. Having villains or anti-heroes in a story is never a bad thing, but they have to be made compelling, or at least somewhat relatable, and Siege of Paris does neither.

More of the same

Between its main story missions, players can explore Paris and its outlying areas the same way they can in England, or Vinland, or any of the game’s other areas. Much of what The Siege of Paris offers, both inside and outside of its main story, is what you’ll find throughout the base game. This is Valhalla‘s systemic issue, and it’s a tough one: The game’s main gameplay loop repeats quickly, and often with few variations. In The Siege of Paris, that remains true.

The expansion’s sizable map is still littered with things to collect, world events, and wealth to stuff one’s pockets with. There are even a few monasteries to raid, but once again, none of it is new. The sameness would have been offset somewhat if Paris looked more distinctive, but it doesn’t. If you told me it was another part of England, or really any area in central Europe, I’d believe you.

That’s not to say the area can’t be gorgeous. It’s filled with lush nature, small towns, and villages. Paris has its own charms, but lose the French accents and I wouldn’t be able to tell ninth century Paris, France from Hamburg, Germany. It’s simply not distinctive; there aren’t any landmarks to recognize or places players would want to rush to see.

Even the rest of the expansion’s content has that trait. None of the missions, save for the actual siege of Paris, are memorable. Once again, it’s the same content players will recognize from the main game. I followed NPCs, investigated things by holding down a button for a moment, and beat enemies to a pulp.

It’s simply not distinctive; there aren’t any landmarks to recognize or places you would rush to see.

Thankfully, there is some unique content in the Siege of Paris. Players will face off against cavalry, which poses a decent threat until they work out how to effectively take them on. There are also rebel missions, which players can take on whenever they want and earn new cosmetics. The DLC also marks the return of assassination missions, which players may remember from earlier games in the franchise. Tasked with taking down a specific target, players can explore opportunities to assassinate their quarry. However, these missions all steer players towards one, extremely obvious solution, leaving player creativity in their approach behind.

I’ve played a decent number of RPG expansions in my time, and a majority of them have built on what makes the base game good. Whether it was The Witcher 3‘s Blood and Wine or New Vegas‘ Old World Blues, a good DLC takes the best aspects of the base game and raises them up while including a unique, new spin. Assassin’s Creed Valhalla‘s Siege of Paris is antithetical to that. The game’s best parts — its world and characters — are left in the muck, while a boring gameplay loop and heavy-handed story take center stage. Of course, some players will enjoy having more of the same to explore, but considering how long it takes to even finish Valhalla, I couldn’t imagine coming back for seconds. When I first arrived in the game’s version of Paris, I saw an exhausted, burnt-out land. When I left it, I could certainly sympathize.

If you’re looking for extra Assassin’s Creed adventures, try out Odyssey‘s The Fate of Atlantis DLC pack. It’ll take a while to complete, but it offers much more unique content than you’ll find in The Siege of Paris.

Completing the main story of The Siege of Paris took me around seven hours. Completing the rest of the DLC’s content could easily eat up another 20 by my estimate.

No. If you finished Assassin’s Creed Valhalla and aren’t champing at the bit for more, there’s no compelling reason to dive back in. The Siege of Paris doesn’t offer enough unique content to entertain anyone but the most fervent of Assassin’s Creed fans.

Assassin’s Creed is going to feudal Japan, China, and beyond in 3 new games
First Assassin’s Creed Mirage trailer reveals new protagonist, release window
Ubisoft and Netflix partner for an Assassin’s Creed show and mobile game
Assassin’s Creed Mirage announced with more info coming next week
The best iPhone games to play in December 2022: Marvel Snap and more
The best Android games available right now (December 2022)
Destiny 2: Where is Xur for the weekend of December 2
Warzone 2.0 and DMZ contract guide: every contract and reward explained
Trust me: Play The Callisto Protocol on its easiest difficulty setting
The most innovative gaming tech of 2022
Monster Hunter Rise won’t support cross-progression between PS4 and PS5
The most innovative tech products of 2022
How to interrogate enemies in Warzone 2.0