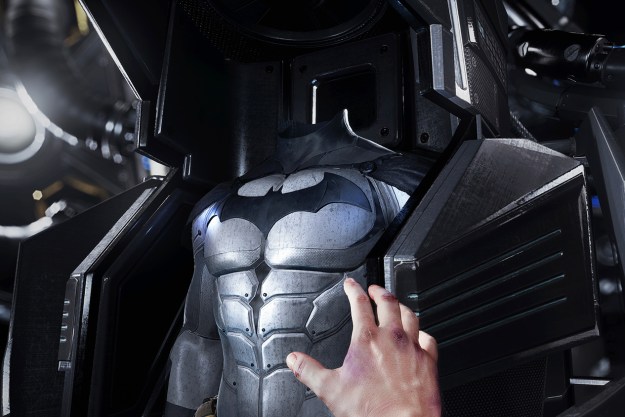 “‘Batman: Arkham VR’ is one of the most immediately impressive AAA experiences to launch on the PSVR, but ultimately lacks substance.”

Rocksteady’s Arkham series of Batman games are among the best superhero games ever made because they capture the moment-to-moment feeling of being Batman. Swinging through the rafters and strategically picking off increasingly-panicked henchmen one by one is thrilling. Their finely-tuned balance of stealth and brawling tools blend to create a top-notch power fantasy.

Batman: Arkham VR, the studio’s virtual reality offshoot of the series for PlayStation VR, attempts to build on the idea of providing the “Batman experience,” by placing you literally in Batman’s boots. Set between the events of its second and third games, Arkham City and Arkham Knight, Rocksteady has mined its years of experience with the franchise to offer players a guided tour of the Batman world, as they envisioned it.

The game’s presentation is slick and immersive, built to reflect the aesthetics and lore of Rocksteady’s franchise, but the game’s attention to surface-level detail ultimately serves to underline how little of the “Arkham experience” is present in this game. So much of what made the previous Arkham games work was what you did, not what you saw and heard: In Batman: Arkham VR, you don’t do much of anything.

A game by any other name

Arkham VR isn’t so much a game, per se, as it is an “experience.” It is a strictly linear affair, a series of scenes for Batman to complete in a fixed sequence that takes about an hour or so. Much of that time is spent watching events play out around you. This creates some memorable moments, such as an early descent by elevator from Wayne Manor into the Batcave that you really feel in your stomach. There are also several moments where Batman is faced with a mirror, which registers the player’s head and hand positions to startlingly good effect. It’s a simple, but effective trick that hits home the idea that, in the moment, you “are” Batman.

The vast majority of challenges involve simply finding a series of things in no particular order and with no time limit. Batman has batarangs to throw — there are a couple places that require hitting switches or knocking out bad guys to progress — but the game’s very generous aim-correction make it possible to move forward by simply flipping your wrist in the general direction of the target. Any shot short of throwing it the wrong way will sail right over.

Its more involved activities could generously be described as puzzles, but they’re hardly head-scratchers. In an early sequence, you reconstruct a back-alley fight by scrubbing back and forth through a virtual simulation to pick out the moments when key injuries occurred. Later, you use a scanner to search corpses for evidence, just like you did when you played Arkham Knight.

Westwood Studio co-founder Louis Castle, discussing his Blade Runner adaptation on Soren Johnson’s Designer Notes podcast, raised the insightful point that detective games with a single solution necessarily fail on some level because the player can just brute-force their way to the answer by trial and error. The stripped-down hunt-and-peck puzzling of Arkham VR (and really the whole Arkham series) embodies this limitation. However, where the main series uses these puzzles to break up the more dynamic combat- and stealth-focused gameplay that fills most of the game. When that more active framework is removed, the puzzles themselves feel distinctly thin.

From a purely experiential standpoint, however, Arkham VR is an engrossing and well-produced ride. The familiar visuals of Rocksteady’s Gotham City and its denizens look great up close, and offers a level of cinematic immersion that will be enough to satisfy some players.

The amount of handholding … feels patronizing at times.

Moreover, the game uses that state of immersion to great effect. A psychologically-driven nightmare sequence, similar to the Scarecrow sections of the previous Arkham games, plays with your expectations in a meaningful way. Moments like this one, and the aforementioned descent into the Batcave showcase, a technical savvy for making “VR magic” that, while not exactly gameplay based, are a sight to behold nonetheless.

The developers at Rocksteady are smart, and the experience is well-crafted, but at the end of the day there’s just not a lot to Batman: Arkham VR. Some Riddler-style Easter eggs scattered throughout the story will unlock character, vehicle, and object models for you to check out back at the Batcave, but that will only be a draw for the most diehard Arkhamphiles.

Batman: Arkham VR offers a tantalizing taste of what engrossing AAA VR experiences might feel like in the future, and serves up the first major franchise to roll the dice on the new medium. Immersion aside, however, the hour-long experience feels very thin, offering very a low level of engagement for something trading on its interactivity. The amount of handholding the game relies as you are lead from scene to scene feels patronizing at times, like being in an especially grim episode of Blue’s Clues. Batman: Arkham VR feels like a very long tech demo: That isn’t uncommon among current VR titles, but it is less than we hoped for.

Rocksteady’s trilogy of Arkham games still stands out as the most comprehensive and fun set of superhero fantasies in gaming; they should be your go-to Batman experiences.

The game itself takes no more than an hour or so to play through. Bonus collectibles scattered through the game can extend its life slightly for the devoted, but don’t expect to be exploring for more than a few hours.

If you love Batman, and want a taste of the sort of immersive, cinematic VR fantasies that virtual reality may be able to offer in a few years, then Batman: Arkham VR can provide a solid demo of experiential storytelling. If you are looking for a game that offers entertainment based on challenge beyond participation, you should skip it.