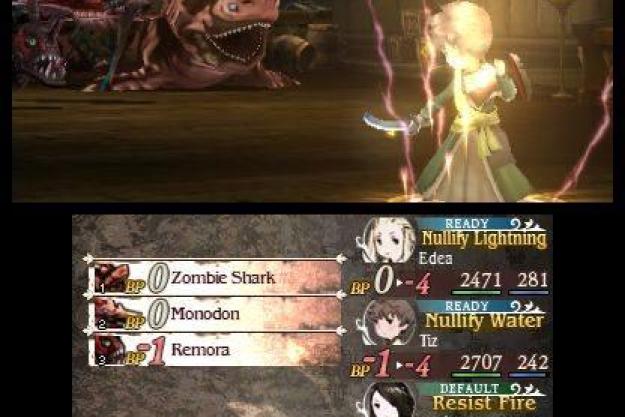 “Even without the name, Bravely Default for Nintendo 3DS is one of the best Final Fantasy games yet, the work of artists utilizing their talents to make something big, beautiful, and fun.”

Final Fantasy was built nearly 27 years ago to have a malleable identity. It was an engine built for telling great video game stories. And it was a blank slate that spawned a massive series spread over dozens of sequels, spin-offs and tie-ins. Final Fantasy is soil for planting new ideas. Bravely Default for Nintendo 3DS may not carry the same name, but it is one of the best Final Fantasy games yet; the work of artists utilizing their talents to make something big, beautiful, and fun.

Like the Nintendo DS cult hit Final Fantasy: The 4 Heroes of Light, Bravely Default‘s foundation is the central storytelling component of Hironobu Sakaguchi’s 1987 classic. A fantasy world full of monsters and magic is kept alive and thriving through the power of four sacred crystals tied to the elements. When those four crystals are almost destroyed, a group of four young warriors set out to save the world and face off against an almost omniscient threat as it tries to destroy reality.

Even as a game that is light and pretty and sweet to touch, it’s still got the spirit of Final Fantasy in its guts.

It’s all here! The warriors in question are amnesiac, suave womanizer Ringabel; proud soldier Edea, who betrayed her homeland; Tiz, the sole survivor of the big calamity that sets the adventure in motion; and Agnes Oblige, one of the mystics in charge of keeping the crystals doing their thing through the power of prayer. Bravely Default‘s world of crystals, airships, and sinister gods is familiar and so are its heroes, but they’re no less charismatic for it.

Banter between the principal characters is frequent, and regularly optional for those that want to just get to the action. They’re all nicely drawn characters, if shallow ones. Tiz’s golden boy act, Edea’s pampered goofiness and combat prowess, Agnes’ lone-wolf drive, and Ringabel’s constant perviness don’t evolve much over the course of the game, but that’s fine. It’s all fun.

Some fascinating themes are toyed with. At the beginning of the game’s se8cond chapter, when the gang arrives in a city of flowers whose all-woman population is obsessed with physical beauty and material goods, it’s the absence of the water crystals worshippers causing the descent into vice. In fact, the primary threat at the beginning of the game is the “anti-crystalist” movement, military forces trying to hunt down vestals like Agnes.

Then, right when you start to think Bravely Default is going to turn into a deep treatise on spiritual decline, it goes on some profoundly goofy tangent. Before Anges can help the city of flowers get back on track, she has to compete in a beauty contest. A whole dungeon and main story quest culminates in an extended cutscene about her trying on bikinis. Whatever dramatic tension got built up dissipates right quick.

That’s fine though. Lightheartedness is by no means a drawback here. Bravely Default‘s greatest pleasures aren’t cerebral but tactile, delighting every physical sense save smell. Akihiko Yoshida’s art and art direction has produced the most visually stunning Nintendo 3DS game yet, besting technical showcases like Luigi’s Mansion: Dark Moon. With the 3D effect turned on, towns like the volcano-based Eisenberg are halfway between a painting and a diorama. Revo, the game’s composer, made a score that matches the visuals perfectly with a balance between light and driving tunes that best anything Nobuo Uematsu’s done since the 1990s.

For all its audiovisual finery, the best thing about Bravely Default is touching it. As a turn-based RPG, its pace and feel is a whole lot different than The Legend of Zelda: A Link Between Worlds, but it shares a great deal with that game in how it rethinks the way people actually play games.

Jobs define character growth in Default. By completing side quests and key story moments, the four characters can take on different roles like the healer white mage, sword-wielding bruiser knight, or even some offbeat vocations like vampire. Getting into fights with monsters in the field nets you experience points that level up both your core stats as well as your current job level. This is stuff as old hat as the quest and the crystals, though. The real fun of these fights is how you manipulate attacks.

Right when you start to think Bravely Default is going to turn into a deep treatise on spiritual decline, it goes on some profoundly goofy tangent.

Rather than waiting for time to pass so you can take a turn, you can cue up to four actions by selecting “brave” from a menu. Want to attack a dragon four times? Do it, but then the dragon gets four actions too. If you want to save up, you can select “default,” which lets you save up one action and defend. By the middle of the game, you’re furiously clicking the L button to cue up four arrow shots from Ranger Ringabel while keeping White Mage Tiz and Red Mage Agnes in reserve to heal.

The titular battle system would be nothing if the game wasn’t built for customization at every level. If you bore of throwing yourself again and again at a big boss fight against a crystal-possessing demon, you can turn the difficulty down to easy whenever you like then click right on the D-pad to fast forward the fight animations. Tired of getting jumped by scorpions while exploring a mountain? Turn the encounter rate to 0%. Want to build up a money stockpile? Jack that encounter rate up 100%. Bravely Default never shies away from letting you tinker with its guts, and it’s a pleasure to play because of it.

Also impressively forward-thinking is Bravely Default‘s take on multiplayer. Tiz’s hometown that gets destroyed at the game’s open, Norende, can be rebuilt through a little cartoon map. By connecting to the Internet at save points or passing other people with the game in the real world, Norende gains new citizens and super strong enemies to fight. Those citizens can be put to work rebuilding weapons and item shops or clearing space for new operations and how long it takes depends on how many people you put to the task.

Rebuilding nets you items like accessories that speed up job development or how much gold you earn. It’s simple, fun, and completely usable, letting you fiddle with the game for just a few minutes before putting it back into sleep mode. Building Norende is just one more way that Bravely Default feels like a thoroughly modern but still wholly traditional Final Fantasy.

If there’s any strike against this role-playing game, it’s that it never feels quite as dramatic as the old games that so inspired it. Deeply talented people collaborated to produce a lovely fantasy, but it’s not an epic one. Ultimately that’s okay. Bravely Default doesn’t need to be lonely like Final Fantasy was nearly three decades ago. Even as just this, a game that is light and pretty and sweet to touch, it’s still got the spirit of Final Fantasy in its guts. It is good soil.

This was reviewed on a Nintendo 3DS using a code provided by the publisher.