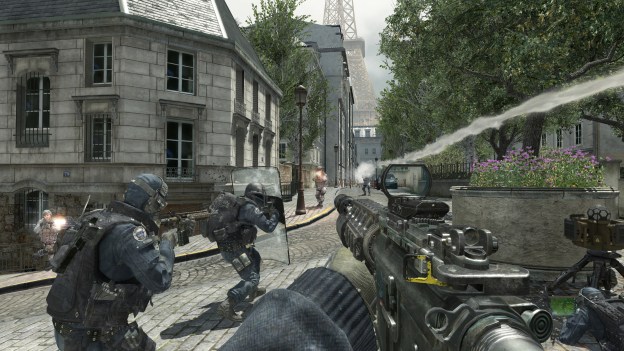 When I told my friends that I was headed to Los Angeles over Labor Day to play Modern Warfare 3, they were less than gracious. In fact, I’m not sure what many of them muttered, but it wasn’t good, and I probably wouldn’t have appreciated it. And after having a chance to go hands on with the Modern Warfare 3 multiplayer months before it’s released, they probably won’t be any happier with me when I head home and tell them that it was awesome.

At the Call of Duty XP event this weekend in LA, Activision unveiled the competitive multiplayer, a new level of the cooperative mode Spec Ops and gave details about the Elite premium service. There were also a few treats for fans, like the paintball course shaped like Modern Warfare 2 level “Scrapyard,” where I intend to dominate Digital Trends’ contributor Adam Rosenberg, as well as concerts from Dropkick Murphys and Kanye West, but the real focus is the competitive multiplayer.

Call of Duty redefined the online multiplayer for consoles. The last two Call of Duty games each made over a billion dollars, and the upcoming title is expected to do just as well, even with more competition than ever (Battlefind 3, anyone?).

The core mechanics of the Call of Duty multiplayer remain intact. If you are familiar with the other games, then you will feel right at home with Modern Warfare 3. There are plenty of technical improvements, but it still moves and feels like Call of Duty, in the best way possible. If anything, the weapons feel slightly muted from MW2, which is a good thing, as anyone that cursed the akimbo Model 1887’s, or felt the unbelievable–literally unbelievable–range of some of the assault rifles can attest to.

The graphics look great. They aren’t quite on the jaw-dropping level that Battlefield 3 is on, but they are close and are at 60 fps, ensuring that they will be among the best on the market when released, both in terms of character animation and the look of the levels. There are no destructible environments, but the levels are intricate and well-designed.

One of the major issues that Infinity Ward wanted to address was the flow of the maps. In a press conference at XP, IW developers discussed what made Call of Duty 4 work so well, and where they slightly stumbled with Modern Warfare 2. In an effort to increase the scope of the multiplayer with things like vertical threats, they admitted that it was too easy to die in MW2. In MW3, there will still be plenty of multi-level combat, but there will be more flow to the game as you are forced to move. There will also be a greater emphasis on the gun battles.

In the press conference, Infinity Ward also admitted that MW2 put a bit too much emphasis on the kill streaks. So to that end, the kill streaks have been completely reimagined for MW3, and are now called kill packages.

The first big change is that there are now three classes of kill packages, and each will appeal to a different type of player. The assault kill package is what you are used to, with your consecutive kills unlocking offensive perks, like helicopters and airstrikes. There are a few new tricks, like bouncing betty mines and grenade turrets, but anyone who knows the games will feel right at home.

The big changes are found in the other two kill packages: Support and Specialist. The Support kill package is designed for the person who is there to help the team, but dies repeatedly in the process. Anyone who plays domination can relate, as you try to capture a flag but catch a grenade again and again. For those people, their kills will be cumulative, regardless of when they die. So five kills spread out over four deaths will still unlock a reward—just not necessarily an offensive reward. Support will receive things like care packages, ballistic vests and eventually a juggernaut outfit, which can turn the tide of a fight, but requires 18 kills.

The Specialist kill streak is a bit different, and more unique. At each new level, 2 kills, 4 kills, then 6, you earn a new perk, in addition to the three that you begin with. If you receive 8 kills in a row, you unlock every perk at once until you die.

Death streaks return as well, and there are now several more options to choose from, including some really powerful perks that are there if you go on an epic skid.

Another semi-big change is weapon proficiency. There are over 40 guns in MW3, including 10 assault weapons alone. The more you play with a particular gun, the more you unlock. Not just attachments, which both MW games already featured, but a new addition called “weapon proficiency.”

As you earn kills with a particular weapon, you unlock weapon options that add a weapon perk. One is the kick, which when equipped lowers the kick of a gun. Another is the focus, which keeps your aim steady when shooting. Others include the ability to hold your breath (like Iron Lungs for snipers), while others reduce the sway of a gun while running. There are several to choose from. Once you pick your proficiency, you then choose your attachment(s), and there are several, including a new dual scope, which lets you switch between two types of scopes on the same gun.

There are also a handful of new perks, but nothing really shocking. Commando is gone (thankfully), and the perks are more subtle than before–so no martyrdom.

While only one new game mode was on display, a second was announced, and more are expected on release. The new playable game mode is called “Kill Confirmed,” which is a fantastic twist on team deathmatch. When a player is killed, they drop dog tags. If you score the kill, you will still earn individual points, but for your team to gain points they need to collect enemy dog tags. The flipside of that is that you can also retrieve your teammates’ (and your own) dog tags, and deny the other team those points. In theory, there could be 100 deaths in a match, but a 0-0 score. It makes it so that you are forced to keep moving. You can always use the tags as bait and try to lure enemies in, but that can be risky. There is a huge amount of strategy possible, and this could quickly become one of the best new additions to MW3.

The other game mode that was announced but not shown was “Team Defender,” where there is one flag on the map, and the team that grabs it first must defend the flag carrier to gain points. We weren’t able to see it, but it sounds intriguing. While one person is the flag carrier, that person’s team can set up a level of defense and prepare for the onslaught. But the twist against things like defending the flag in domination is that the flag carrier can move anywhere, so a team can embed themselves in a defensible position of their choosing and wait, even laying traps along the way. The possibilities are awesome.

There will also be several new game modes available in private matches, including things like infection, where the infected try to swell their ranks by killing opponents; drop zone, where care packages are dropped on an area and one team needs to defend that location; juggernaut, where one player is the juggernaut until they are killed and that person becomes the juggernaut; plus two game modes from Black Ops’ wager matches, gun game and one in the chamber.

All of the private matches can be customized, and then shared on Elite.

The first big news is that MW3 will feature dedicated servers, which should improve connectivity issues. That will help with the bandwidth-demanding amount of maps due on launch day, as well as the planned DLCs. On the disc, there will be a whopping 16 maps. It sounds like there will be at least 12 add-on maps due over the year after launch, so by the end of MW3’s run, players will have 28 maps to choose from.

Of the 16, five maps were on display. “Dome,” a desert outpost, is a small map, with two pathways separating a dome structure and a crumbling building. “Resistance,” a Parisian district, is visually impressive, and has three major pathways and a few others through burning buildings, with one raised street. “Underground,” a ruined section of London that plays above and below ground, is a massive map with vertical battles and three distinct areas to battle. “Arkaden,” a German shopping district, offers some of the best graphics and wide open areas on one side with more cover on the other. “Village,” an African town, mixes nature and shacks in a relatively small, but dense area with plenty of corners and pathways.

Each of the maps offered something different. The demo was pre-programmed to offer a particular game type on each map, but they all seem fairly flexible. The big thing is that they do flow well, and you really need to keep moving. There are areas to snipe from, and defensible sections, but not many, and the game encourages you to keep moving. There are levels of combat, and buildings that will cause you to look up, while also guarding your sides–but not as much as in MW2. If anything, they are closer to CoD4, just much bigger in size and scope.

Five maps is too few to make any real judgment, but so far the maps to MW3 look like some of the best multiplayer FPS maps in years.

The Spec Ops are the co-op modes for MW3. They are the evolution of the MW2 co-op Spec Op challenges, and Infinity Ward’s answer to Treyarch’s zombie maps. Activision debuted the Spec Ops “Survival Mode” at E3, but so far most of the Spec Ops stuff is still under wraps. A new survival map is being shown off, but the game play is the same.

That isn’t a bad thing though, as “Survival”—which is essentially a horde mode for Gears fans—is a blast. As you play, you earn points that can be used to unlock weapon attachments and tools to help you survive. If you can save up, you can call in an airstrike. Keep saving, and you can call in a Delta Team to help fight off the waves of enemies.

Although we didn’t see them, there will be so-op missions as well, and the Spec Ops games will offer a progression of sorts as well, which will be independent of the multiplayer.

Awesome. My friends are justified in hating me. Modern Warfare 3 doesn’t break the mold of FPS games, and if you are growing tired of the style, then MW3 may not win you over. But for the millions who are obsessed with the game, the tweaks and changes to MW3 are spot on, and look like they will lead to hours, days, and weeks of time spent in the game. The biggest thing was just the flow. The maps moved well—better than MW2, which was a big improvement. The weapon proficiency was a nice touch, and the kill packages take a slightly stale idea and make it fresh.

The Spec Ops mode also offers a lot of potential, but we’ll have to wait and see how it plays out. But if you are a fan of the series, then rest assured MW3 does the franchise proud. November 8 can’t get here soon enough.

Call of Duty: Warzone tips and tricks to win the war