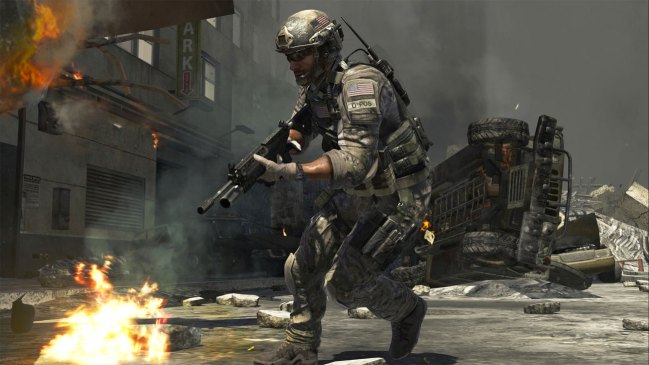 At E3, Activision was busy showing off Modern warfare 3, and while the campaign was not playable, nor was the competitive multiplayer, we were given the opportunity to check out survival mode.

The idea for survival mode is not new, far from it. If you have played Gears of War 2, it is a modified version of the Horde mode. It is a co-op gameplay style that has been copied several times recently—and with good reason, it’s fun. And the Spec Ops survival mode is no exception.

The mode is designed for two players to work as a team. The levels are taken from the multiplayer maps, and each begin with you and your teammate wielding a simple pistol. As you kill incoming enemies you can take their weapons.

With each kill you earn points, and the better the kill the more points—if you kill five without taking damage you earn “killstreak” points (but you do not receive traditional killstreaks—at least not in that way), headshots are worth more, you can earn “rampage points” and several other point boosters. As you earn cash, you can access boxes scattered around the map to purchase items, starting with new weapons. Once you have a gun you like, you can then pay to upgrade it with things like a scope and a grenade launcher. You can also fill your ammo between rounds and purchase a second gun if you like.

As you progress and the enemies grow more powerful, you can then move on to the two other boxes–all three boxes are available at the start, but it makes sense to start with weapons. One of the boxes offers a handful of traditional killstreaks including attack dogs and sentry guns. The other offers things like an airstrike or a Delta Team, which will send in four AI controlled allies who remain until the die.

In many ways the game feels similar to the zombie mode, but with different enemies. There aren’t areas to unlock, but the maps are fairly big, and the ability to purchase weapons is a familiar—albeit welcome touch. but in zombie mode you and your teammate cant each set up turrets and claymores, then lure enemies into a killing field while laughing maniacally. Granted, the laughing manically may not be common.

The level of enemy difficulty grows to a ridiculous level quickly as helicopters attack you, then juggernaut soldiers in full body armor come after you, not to mention the suicide enemies with C4 strapped to their chests.

But regardless of how far you make it, you can always do better next time, as Spec Ops now offers leveling and experience points. The details were still being withheld, but Spec Ops games will feature their own leveling system that is completely separate from the competetive multiplayer.

The most surprising thing about the survival mode is how fun it is. It seems like something that you have played before in other games—and it is—but the Call of Duty movements and weapons offer something fresh to the style. Shooting dogs strapped with C4 is always entertaining too, but the co-op aspect is going to make for a new way to play for many that skipped over the Modern Warfare 2 mode. Adding two more players might have been nice, but the frantic intensity of just you and a buddy may be worth it.

It might sound like a minor addition, but the Modern Warfare 3 Spec Ops survival mode is something worth keeping an eye on.