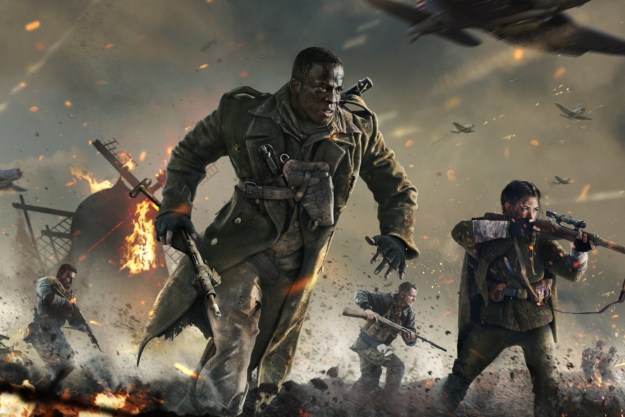 “While it adds some interesting new features to the Call of Duty formula, Vanguard's mixed bag of changes makes it a forgettable entry.”

I fell back in love with Call of Duty two years ago when the series’ Modern Warfare storyline was rebooted. The game featured a lot of the good parts from the classic Call of Duty experience, all while adding in some fun new bits. Tactical sprint was a joy, new options for equipment varied gameplay, and new weapons (including a lever-action rifle that I devoted way too much time to getting good with) were a joy to use. Call of Duty: Vanguard seemed to emulate a lot of that leading up to its release, using the same engine as Modern Warfare and mimicking the game’s more realistic feel.

However, Vanguard is all show and very little substance. It flexes some features, claiming that they’re new when really only one of them is. Outside of multiplayer, Vanguard‘s campaign and zombies modes both try to reinvent their classic interpretations, although both manage to fail in those attempts. Having spent around 15 hours with the game so far, I feel content to set my controller down and walk away from Vanguard for good.

I’ve come to have some expectations when diving into a Call of Duty game, having been a player for years upon years now. I expect a straightforward campaign that lets actions speak louder than words and a zombies mode where I can shut my brain off entirely and enjoy the slaughter with some friends. Vanguard tries to mix up both experiences with some pretty radical changes, although the result is that both changes left me with a bad taste in my mouth.

Call of Duty: Vanguard‘s campaign brings the franchise back, once again, to World War II. Instead of looking at the war through the lens of fighters in a given faction ,though, players are introduced to the Vanguards, a select group of highly skilled specialists from the allied nations. Each has their own backstory, methodology, and even special ability. Each is also painfully uninteresting, along with the remainder of the campaign.

Very few of Vanguard‘s combat-heavy encounters get the blood pumping like previous entries in the franchise.

Vanguard puts its characters as the center of the story, rather than their fight. It’s a big turn for a Call of Duty title, one that would work better if the game actually managed to make me care about any of the Vanguards. Instead, the group comes off as a ragtag team of stereotypes. The Australian has been in and out of jail and disregards orders, the American is a lone wolf ace pilot, the Russian is vendetta happy, and the team is led by a rationally thinking Brit. Those descriptions are the beginning and end of the depth of the characters that players fill the shoes of. They’re typical Call of Duty characters — shallow and uninspired — but the spotlight is thrust upon them nonetheless.

The action set pieces that usually get all the attention in a Call of Duty title are, likewise, a bit underwhelming. Most of Vanguard‘s missions follow a formula of having the player sneak before putting them into a firefight. However, very few of Vanguard‘s combat-heavy encounters get the blood pumping like previous entries in the franchise.

When Vanguard does manage to bring the intensity, it does so with weighty weapons and fantastic sound design. Every weapon in Vanguard has its own sound profile, each of which is mesmerizing to listen to. Even now, I can hear the somewhat hollow, tinny sound an MP40 makes when reloaded. Firing weapons is a simple joy in Vanguard, and the fact that they can blow away cover (or even body parts) only lends to that power.

Each character’s ability doesn’t do much to lend to the power trip that players should be feeling. They’re all extremely simple: Highlighting enemies, commanding teammates, letting players hold on to different kinds of explosives, etc. These abilities are what set each character apart during gameplay, but they ended up hardly making a difference.

Every weapon in Vanguard has its own sound profile, each of which is mesmerizing to listen to.

Vanguard‘s campaign is an upending of everything players should expect from the single-player Call of Duty experience. It lacks those massive action-filled moments, instead telling its story through character-focused cutscenes. The same swift change in direction applies to the game’s zombies mode as well, which now sports a full cast of characters who bark orders at players as they complete objectives. Killing zombies isn’t mindless action in Vanguard, but an objective-based mode where players’ next moves have to be thoroughly considered.

The game’s lone map, Der Anfang, places players in a hub area, directing them toward portals that lead to zones where players have to complete objectives. Some objectives are as simple as killing zombies and surviving, while others task players with gathering up drops from zombies and bringing them to a massive obelisk. While it’s fun to revisit old zombies maps like Call of Duty: World at War‘s Shi No Numa, and have immediate access to the Pack-A-Punch machine in the hub, Vanguard‘s zombies mode ended up feeling weighed down by its objectives and left me wishing it was more directionless like its previous iterations.

A Call of Duty game is defined by its multiplayer mode, where almost all players will spend a majority of their time. And while I can attest that Vanguard‘s multiplayer is better than its other two game modes, that’s not exactly a high bar of quality. Multiplayer in Vanguard has overall satisfying gunplay, but suffers from far too many balancing issues that punish players who aren’t willing to grind the game out for a weekend.

When you hop into Call of Duty: Vanguard‘s multiplayer, you’re given a basic allotment of weapons and perks. But what the game doesn’t tell you is that those weapons and perks are some of the worst available. Low-level players will find themselves constantly outperformed by high-ranking players who have access to the game’s better weapons and weapon attachments. The game’s STG-44, its starting assault rifle, is incredibly difficult to control when firing with its starting attachments, for instance. But higher-level players who have leveled up the weapon can turn it into a laser beam that downs players in an instant.

Vanguard‘s multiplayer also runs into some classic first-person shooter multiplayer issues. In some of the game’s smaller, more chaotic maps, it’s not uncommon to spawn in front of an enemy, serving them up a quick, free kill. This issue isn’t uncommon enough that it doesn’t sometimes throw the result of a match to luck, or give opponents easy access to their killstreaks, some of which are problematic in their own right. Some of Vanguard‘s killstreaks drop bombs across the map, and while they won’t always damage you, they’re guaranteed to send a puff of smoke up into the player’s face. It’s a disorienting effect that easily made me lose gunfights and generally felt unfair.

Vanguard‘s biggest issue, outside of strange spawns and balancing issues, is one it has in common with Call of Duty: Warzone. During my time with the game, I’ve played a handful of matches where it was clear that a player was cheating. Killcams showed them locking onto players, sometimes through walls, before mowing them down with extremely precise fire. Cheaters will eventually make their way into any game, but given the competitive nature of some of Vanguard‘s game modes, like Search and Destroy, encountering cheaters can be a game-ruining experience.

During my time with the game, I’ve played a handful of matches where it was clear that a player was cheating.

But when everything does go right in a game of Vanguard, when things don’t feel too unbalanced and there aren’t any cheaters present, the game’s innovations shine. Adding destructible environments to the game brings a new level of depth, as entire chunks of cover are eventually blown away, transforming maps. Being able to burst through walls is just a badass move like something ripped straight out of a ’90s action movie. It’s unfortunate that these features are overshadowed by Vanguard‘s more prominent issues.

Vanguard does what every entry in the Call of Duty franchise tries to do. It seeks to evolve the series’ fast-paced action, flipping entire game modes on their heads in some places. But Call of Duty: Vanguard is an example of innovating in the wrong direction. It emphasizes the wrong parts of a Call of Duty campaign and zombies mode, turning them into the worst versions of themselves. The game’s lone redeeming factor is its multiplayer, which retains that good old run-and-gun playing style that players should expect. However, it’s bogged down with its own issues, ranging from cheaters to potentially game-ruining spawns. These issues can be fixed, though, and once remedied might leave Vanguard as an overall decent entry in the franchise for multiplayer lovers.

Either way, I’ll still be playing 2019’s Modern Warfare for another year at least.

If you’re looking for a new multiplayer FPS to get into, Battlefield 2042 is easy to recommend.

How long does it last?

Call of Duty: Vanguard‘s campaign goes by quickly, lasting just over six hours. Anyone who wants to unlock everything in the game’s multiplayer should be able to entertain themselves with the game until another Call of Duty title releases next year.

No. Call of Duty: Vanguard doesn’t hit the bar of quality set by 2019’s Modern Warfare, which to this day holds up well. If you’re in desperate need of new Call of Duty content, feel free to purchase the game, but if you’re satisfied with whatever game in the franchise you’re playing now, keep at it and pass this one up.

Call of Duty: Vanguard publisher Activision-Blizzard is currently facing lawsuits over the company’s alleged history of toxic workplace behavior. If that’s something that might impact your buying decision, we recommend reading up on the situation.

Topics
The best iPad Pro games in 2023: the 26 best ones to play
The best game-streaming services for 2023
The best capture cards for 2023: Xbox, PlayStation, and PC
Call of Duty: Warzone 2.0 Season 2 will finally fix its looting system
How to charge a Nintendo Switch controller
Best gaming laptop deals: Save on Alienware, Asus and more
Best Alienware Deals: Save on gaming laptops, PCs and monitors
The best video games of January 2023: Hi-Fi Rush, Dead Space, and more
With Valiant Hearts: Coming Home, Netflix finds its video game voice
The best guns in Dead Space
The Crew Motorfest brings a racing festival to Hawaii this year
The best skills to inherit in Fire Emblem Engage
Dead Space: how to fix the centrifuge