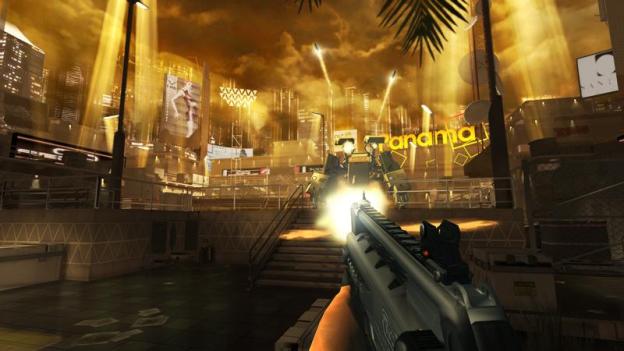 Yesterday, Square Enix and Eidos teased the next chapter in the Deus Ex franchise, officially naming it as The Fall. It wasn’t exactly clear what The Fall would be though. Many were expecting the next console and PC entry in the series, a followup to Deus Ex: Human Revolution; and with E3 looming, it would make sense to unveil it now. It turns out that The Fall is something else entirely: it is a new episodic game coming to mobile and tablet devices this summer.

Deus Ex: The Fall is not a sequel to Human Revolution, but rather the follow-up to the the 2011 novel Deus Ex: The Icarus Effect. It picks up directly where the book finished. The Fall is a touch-controlled action RPG exclusive to smartphones and tablets. It’s in development at Square Enix’s mobile division in Europe, in collaboration with Eidos Montreal and N-Fusion. The first installment will cost $6.99, though it’s unclear exactly what mobile platforms it will be released on.

“Deus Ex: The Fall is set in 2027– a golden era for science, technology and human augmentation, but also a time of great social divide and global conspiracy,” reads the press release sent out this morning. “Powerful corporations have seized control from governments and command the drug supply needed by augmented humans to survive. In this chaos Ben Saxon, a former British SAS Mercenary who underwent physical augmentation, is desperate for the truth behind the drug conspiracy. Betrayed by his private military employers, the Tyrants, not only is his own life at risk, but for all augmented humans, time is running out…”

Despite not being strictly a shooter, The Fall features gameplay hallmarks from the series that include “exploration, action, hacking, stealth, social enhancers, player choice and consequence,” according to Eidos Montreal executive producer Jean-François Dugas.

“Smart devices are central to Square Enix’s platform strategy and we approach it with the same attention as our boxed and digital releases,” said Square Enix Mobile general manager Antony Douglas. “Deus Ex: The Fall is going to be testament to our commitment in delivering high quality entertainment on mobile and tablet devices.”