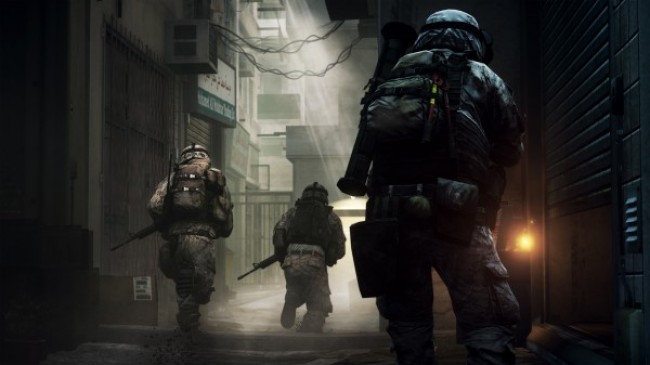 It is either going to be a good holiday season for gamers, or a very contentious one. The fourth quarter of this year is ridiculously packed with massive, heavyweight titles whose combined budgets could buy a medium size country. Lithuania perhaps. And among those heavyweights, the heaviest is Call of Duty: Modern Warfare 3, which is due out in November. It will sell a lot of copies and make over a billion dollars, or it will be considered a disappointment.

But not every game is ready to roll over and die in the face of Activision’s juggernaut, and if any title has a shot at stealing the crown of “most popular FPS” from Call of Duty, it is EA and DICE’s upcoming FPS, Battlefield 3. It won’t sell more copies than Modern Warfare 3—it just won’t—but it is poised to sell a lot of copies, and it could be the game that claims the Call of Duty fans that are burned out on that franchise. Who knows, maybe this is the beginning of a Yankess/Red Sox style rivalry that will carry down through the years.

Today at E3, we got a chance to check out the multiplayer side of BF3. We’ve already seen a ton about the campaign (pro tip: it looks awesome), but games like these make their name on the longevity offered from the multiplayer.

If you played Battlefield: Bad Company 2, then you will be familiar with the set up. You have four classes to choose from, and although they aren’t technically the same as BFBC2, they are fairly close. The first class is the core soldier, who takes over the medic spot. He can drop health packs, but he comes standard with an assault rifle. The second class is the engineer, which is very similar to previous games, including the ability to repair vehicles, and he carries a rocket launcher. The third class is a support soldier, who comes with a light machine gun, and drops ammo for teammates. The fourth is a recon solider, which is the sniper class.

There are also new perks and unlockables, and each weapon has three customization slots. More on this is promised in the future, as is “Battlelog”, which sounds like a stat tracking feature with a social aspect, although the developers were deliberately vague on this and promised more soon.

The multiplayer game modes announced were rush, conquest, and a new team deathmatch. The demo we played featured rush, which was similar to the previous games. You have one attacking team pushing towards a base with two targets to destroy. Once those targets are gone, a new section of the map opens up with two more targets, and once those have been destroyed another section opens up. Unlike previous titles though, DICE promises that each section will feel different from the previous one, and it will feel like it is almost another map entirely.

The map we played was set in Paris, and although the scenery was unique and felt like something totally new, once the game began it was business as usual—in a good way. Despite the fact that what we saw was still pre-alpha, Battlefield 3 might very well be the best looking game this year thanks to the Frostbite 2.0 engine–but looks won’t make a game fun.

If you enjoyed the previous Battlefield games, even a little, then you will enjoy Battlefield 3. It will be interesting to see how the leveling system works. Anyone that plays Call of Duty knows that the leveling system for that game is key. Years of peoples’ lives have been sacrificed to the class selection screen, while in Battlefield it has been less of an emphasis. More on that is expected in the coming months.

The game moves and acts like the previous Battlefield games, but shinier. It you are a fan of the series, you will have a lot to like. Those that haven’t played it, or weren’t a fan, may find themselves taking a second look thanks to the look of the game.

Expect to hear plenty more about this game as the scrutiny, and anticipation, mounts on the way to the October 25.