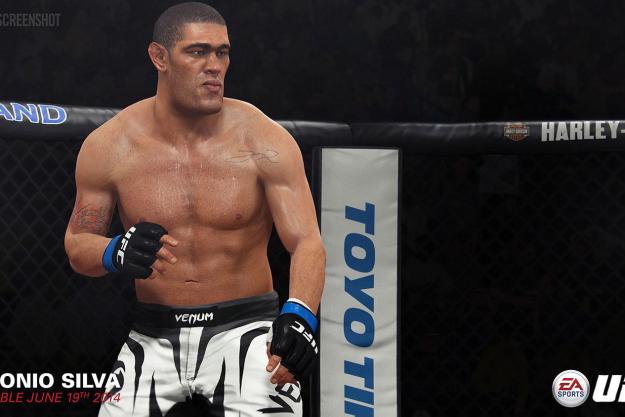 “EA Sports UFC has failed to create something as immediately entertaining as it is rewardingly complex.”

EA Sports UFC is a game of extremes, which is appropriate considering the very nature of the Ultimate Fighting Championship company. President and mascot Dana White’s unusual mixed martial arts competition and media empire has, for 20 years, brought people something incredibly simple, almost elegant, in the world of sports and entertainment: people beating the crap out of other people. Some of the finest practitioners of Jiu Jitsu, Muay Thai, and myriad other fighting disciplines get in an octagonal, caged ring and just pummel the bejesus out of one another.

More theatrical than boxing, spare and terrifyingly blunt in a way WWE’s acrobatics can’t be, UFC fights are seductively severe. In the right hands, so is EA Sports UFC. It can be difficult to meet on its own terms, however. In an effort to translate the intimate physicality of MMA fights as realistically both on screen and on a video game controller, EA Canada has failed to create something that is as immediately entertaining as it is rewardingly complex.

EA Canada has failed to create something that is as immediately entertaining as it is rewardingly complex.

All the parts are present. UFC‘s bones are admirably aligned. None of the excess fat weighing down EA’s biggest sports games like FIFA and Madden NFL is present here. Five weight classes; a quick fight mode that lets you select one of 97 fighters across those classes; a training mode with an assortment of challenges for learning floor, grappling, and striking moves; an online mode that also loops in real world UFC stats and events; and a career mode that lets you pick from the real fighters or use your own made with the game’s simplistic character creation tools.

Even in the menus, UFC is kept simple, with the same muted contrasts between light and dark in the menus that characterizes actual bouts, their bright Octagon in the center of a darkened arena. That sparse presentation makes the meticulously detailed fighters shine, especially on a higher end machine. The fighter creation tools aren’t as robust as you might have seen in other game, but our PlayStation 4 review copy produced remarkably lifelike result. It’s always preferable to have limited but high quality characters in a game rather than many creepy, clone-like mannequins.

If there’s any significant drawback to UFC‘s presentation, it’s the regular interruption of the action by real footage of the fighters and White. Rather than make career mode feel like an evolving game, you get an infomercial. After playing through another round of rote drills going over the basics, does anyone really want to sit through inspirational speeches as Dana White explains why he’s got his eye on you for The Ultimate Fighter? Perhaps there’s a diehard UFC fan out there that hungers for this sort of television simulation, but here it’s an impediment.

All of these scenes can be quickly skipped, so it’s hardly as irksome a burden as the heaps of menus that clog up other EA Sports career modes, but it’s hard not to wish they could be turned off entirely. (Especially since they’re accompanied on PlayStation 4 by messages that you can no longer record or broadcast that section of the game. Broadcasting your fights? Fine. Broadcasting weird commercial cutscenes of Dana White? That’s a no-no.)

The muscles these bones support are not spare, simple, or elegant, but they are impressive in their depth. Actual fighting in EA Sports UFC takes a great deal of practice and patience. EA Canada’s Fight Night boxing games have a strong history in creating controls that don’t stand between player and game. UFC doesn’t reach the high bar set by Fight Night’s incredible use of analog sticks, but it does an admirable if obfuscating job.

Almost every single button on the PlayStation controller is used for something. The top two face buttons correspond to right and left arms, the bottom two to your legs. Performing punches, kicks, and knees is done by pressing those face buttons alone and in conjunction with the primary right and left shoulder buttons as well as the left analog stick. Blocking is married to the right trigger, the left trigger’s for throwing, clicking the left analog stick stands you up off the mat, while the right stick is used for grappling and modifying blocks and throws.

If that sounds like a monumentally confusing dump of information all written out on the page, it’s even more so in the ring. Laying down a Superman punch with your homemade fighter after leveling up and setting abilities in the career mode feels great, and it’s not impossibly difficult to do. Just three buttons pressed at the same time, and you look like a Jon Jones-ian bad ass laying into your opponents face. All of the most basic moves feel satisfying to pull off, and when you come to grips with more difficult maneuvers, like getting into a Thai clinch position, the versatility of UFC‘s controls become truly impressive. Clinching, by the way, is when you’re hugging up on your foe, perfect for kneeing them in the stomach or punching them right in the ear.

Knowing not just what a clinch is but how they’re of actual strategic value in an MMA fight is essential knowledge before firing up EA’s game, though. While the meat and bones of EA Sports UFC are the work of craftsmen, they’re also missing the crucial sinews and tendons to link them all together. The game is absolutely abysmal at teaching you how to play, even though it forces you to sit through identical tutorials multiple times, both when you first turn it on and when you begin career mode. The game flashes up on screen which buttons to press to do basic moves, but never illuminates when or why you should be using them.

None of the excess fat weighing down EA’s biggest sports games like FIFA and Madden NFL is present here.

That’s fine in a training mode, but when you’re actually up against the AI, implementing all these different maneuvers effectively is a mystery. That’s just basic fighting too. Forget any guidance on how to build up your homemade fighter. The only readily apparent option for victory when you first start fighting is to bludgeon your rival until they pass out. The game tells you nothing about how to properly pursue a submission, or how to use the obtuse submission controls when an opponent is fighting back.

Unless, of course, you’re a devoted MMA follower. On the one hand, it’s admirable that EA Sports UFC leaves so much to the player to discover. On the other, the game is ultimately even more limited in its potential reach than your average professional sports game out of EA.

As it is here, EA Sports UFC is only built for two extreme types of players. One who is intimately familiar with UFC and loves video games, and the rare type of player that loves nothing more than decoding complex control schemes and unforgiving games. For the average player, or even just the casual UFC fan, EA still hasn’t made you an MMA game.

This game was reviewed on a PlayStation 4 using a disc provided by EA Sports.