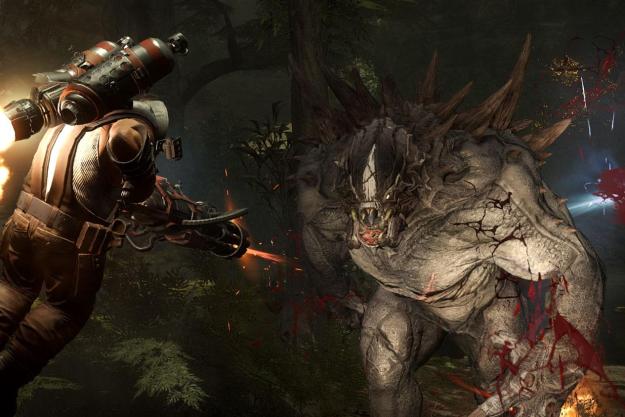 “The jungle was wide and full of twitterings, rustlings, murmurs, and sighs. Suddenly it all ceased, as if someone had shut a door. Silence. A sound of thunder.”

– Ray Bradbury, A Sound of Thunder

At its very best, Turtle Rock Studios’ Evolve channels Bradbury’s time-traveling story about profoundly wealthy big game hunters on the hunt for a Tyrannosaurus Rex. The author expertly distills the horror of facing down a 14-foot tall, 40-foot long monster with nothing more than a rifle and a warped sense of machismo into one, singular moment.

The game makes you feel that sound of thunder when you and three friends track down a level three Goliath in some muddy corner of the planet Shear. Sometimes – though unfortunately not often – Evolve even lets you feel like you’re the one making that sound when you’re driving the monster and trying to best four human controlled hunters. This undeniably delicious frisson only comes occasionally and under very specific circumstances.

Evolve makes you feel that sound of thunder when you and three friends track down a Goliath in some muddy corner of the planet Shear.

In emphasizing level progression, skill growth, and unlockable characters, Turtle Rock smothers Evolve’s premise: Four specialists navigate a hostile natural environment as one, giant monster evades them. The monster eats other critters wandering the game’s dozen maps to level up—to evolve—into a bigger, nastier form. There are variations on this in the different modes that range from straightforward hunts to attack/defend and rescue scenarios, but it always boils down to four against one.

Two things are immediately striking about Evolve. First is how truly exciting it is to become the monster. It’s large and elusive, able to traverse the map with greater ease than the hunters, even when the four players controlling them coordinate. Footprints and flustered birds provide markers for the monster’s location as the humans try to get eyes on it. Then, BAM, there it is. The Assault, Medic, Support, and Trapper hunter classes all feel essential in the face of even a not-yet-evolved, Cthulhu-esque Kraken.

Juggling scale, speed, and tactics feels overwhelming the first time you hunt, with everyone in a frantic rush to get everything done. Get the medic to tranquilize the beast and then use the heal beam on support while he cues up an orbital strike! The trapper’s on fire! Turtle Rock excels at evoking contained moments of pure, adrenal chaos, especially given how integral cooperation between hunter types is in the new game.

The second thing is how truly different controlling the monster feels from the hunter experience. Playing as one of the monsters – Goliath, Kraken, and Wraith – feels like an entirely different game; each is uniquely cumbersome and difficult to acclimate to. Where using the hunters feels fluid, the monsters are awkward. Their general melee attacks and different forms of locomotion – the Kraken is all about hovering and using the air while the Goliath is a grounded leaper – take a surprising amount of time to use.

The third-person perspective doesn’t help. Playing as a hunter has the look and feel of a first-person shooter, but you steer monsters from a pulled back third-person view. Their sluggish feel could have worked with a different style of presentation, one that better enhanced the impression of driving a humungous, slavering beast. But too often, the monster just feels distant from the action. There are magically empowering moments when you’ve evolved all the way and storm into a cluster of hunters, but fighting the humans just as often feels confusing.

Of course, the monsters change as you continue using them. The Kraken isn’t even available until you’ve leveled up each of the Goliath’s four basic skills by effectively using them in a round of the game. Even if you’re terrible at landing rock throws or leaping ground smashes, those skills get stronger and faster as you play. Meanwhile, leveling up your core user profile opens up new perks that have similarly stat-boosting effects. Over time, the monsters feel swifter and more dangerous as you acclimate to their awkward movements.

This slow growth is the biggest hindrance to enjoying Evolve. By locking away the other two hunters in each class at the beginning of the game, Turtle Rock creates some manufactured longevity for new players. As you get used to the skills offered by each class, new variations unlock. You’re handy with Hank and his shield beam? Now try out Bucket’s sentries!

By locking away the other two monster classes at the beginning, Evolve needlessly gates off completely different styles of play that new players will want to experiment with immediately, if only to get a feel for competition. Even in the case of the hunters, the slow leveling and unlocking of new skills, perks, and characters feels needlessly complex in what could have been a simpler and more approachable game.

It’s a stark contrast to Turtle Rock’s debut, Left 4 Dead, which had an impressively low barrier of entry. Difficulty could be altered and enemy placement always shifted, but the characters themselves never changed. It was all about playing the game using the tools available to you, growing skill naturally and taking on greater challenges as you go. The progression system that defines everything in Evolve feels like nothing more than a barrier between the player and the core pleasure of the four-versus-one hunt.

Evolve as it’s released this week is not the Evolve that will exist in just a few months. Turtle Rock and 2K already have a fourth monster, new maps and hunters, and more planned alongside the rebalancing patches that are part and parcel of developing competitive games.

Even as it changes shape, though, the structure of Evolve is stuck in place, for better or worse. There’s plenty of connective tissue between hunts for players to linger on, but it’s a cumbersome rankings crawl that ultimately serves to muffle the sound of thunder.

This game was reviewed on a PlayStation 4 using a code provided by 2K Games.

Octopath Traveler 2: release date, trailers, gameplay, and more
The best Android games available right now (October 2022)
The best Call of Duty: Warzone BP50 loadout
The best iPhone games to play in October 2022: Lord of the Rings and more
‘Wordle’ today, September 29: Answer, hints, and help for word of the day (#467)
Fortnite Chapter 3, Season 4 guide: All week 2 quests and how to complete them
All Fortnite Chapter 3, Season 4 quests
PlayStation Stars program awards high-tier members priority customer service
Google Stadia shutting down in January and users are getting full refunds
The best Xbox Series X games for 2022
The best games for Steam Deck
Save over $1,000 off a new gaming PC with this Alienware clearance sale
Best gaming laptop deals for October 2022