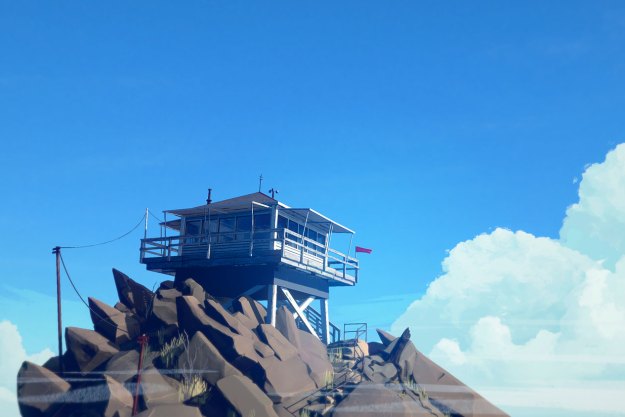 “Firewatch goes for a walk in the woods and gets lost along the way.”

It’s somewhat rare today for video games to tell smaller, more intimate stories about characters, rather than sweeping epics about saving worlds or stopping unstoppable bad guys. The power of Firewatch, the inaugural effort by studio Campo Santo, is in its focus on simple, human moments — it’s mostly about two people talking on the radio.

Firewatch is mostly concerned with hiking around a seemingly vast but very empty Wyoming national forest from a first-person perspective. It’s often beautifully quiet as trees rise over cliff sides and streams of sunlight cut through the leaves. On a minute-to-minute level, the game becomes an interesting look at human relationships, isolation, and guilt. However, when Firewatch tries to go beyond that elegantly simple premise to become about mysteries and conspiracies, it trips and falls.

Protagonist Henry is having some troubles at the outset of Firewatch. After an intense, text-only opening that’s designed to pull sharply at the heart-strings, he takes a job as a fire lookout in Wyoming for a summer. His job: sit in a lookout tower and watch for smoke, in hopes of identifying and stopping wildfires before they rage out of control. It’s a summer of being alone, hiking, drinking, and (apparently) trying to write something.

Henry’s summer away comes after his wife develops early-onset Alzheimer’s disease, and his life crumbles under the weight of her affliction. For the player, that aspect of his personality is somewhat distant, however — when the player picks up with Henry, it’s at the start of his relationship with Delilah, another fire lookout in the national forest and his supervisor.

All of Firewatch is conversations between Henry and Delilah, and hiking around the forest. On Henry’s first day, he’s sent to stop someone lighting off fireworks in the dry-as-kindling woods and winds up getting into a yelling match with a couple of drunk teens. You navigate the forest with your map and compass, you radio Delilah with your findings along the way, and you choose dialogue options to respond to her questions. And that’s pretty much the whole game.

Firewatch doesn’t quite have the writing chops to be a strong mystery, and it doesn’t bring the gameplay chops to make you feel like you’re an integral part of it.

Moment-to-moment, these interactions are the game’s best stuff. Henry and Delilah are well-written and well-acted, by Mad Men’s Rich Sommer and Cissy Jones of Telltale Games’ The Walking Dead: Season One. The adult relationship of a pair of 40-somethings growing closer and closer — even though they never even physically see each other — feels real and believable. Games rarely attempt drama of this kind, and following and shaping Henry’s journey a fascinating role for the player.

And Firewatch is definitely beautiful, which is good, since you’ll spend all of your time walking around looking at scenery. When you’re not picking dialogue options, you’re hiking from point A to point B, occasionally rappelling down walls or hopping over logs. The National Forest is meant to seem vast and sprawling, but it quickly becomes obvious that it’s just a series of paths, all walled off from any greater exploration. Not that there’s anything to find: The game directs you exactly to everything you’re supposed to do and when you’re supposed to do it. There’s not really much to discover off the beaten path, and when there is, it doesn’t add much to the experience.

Before long, Firewatch shifts to become something more menacing. Someone else is out in the woods with you, and its agenda isn’t clear. There’s a mystery to solve, and Firewatch sprinkles in clues as well as red herrings to throw you off the trail. When viewed with hindsight on the macro level, though, the mystery is the weakest thing about Firewatch. It fails to make much sense in the end; its many red herrings feel like story threads the developers abandoned midstream in favor of something less predictable, so they fail to produce effective feints. And you (and Henry) don’t actually solve the mystery — it solves itself.

For all the emphasis on dialogue choices and, seemingly, gathering evidence, Henry never has an active role in figuring out what’s happening in the woods. You get your objectives — whether from Delilah telling you to check something out or from the stuff you happen across when you get wherever she says to go — and then you head to the next location. When the conclusion finally happens, it’s a heaping helping of deus ex machina that brings the story to a close, and all that hiking around empty landscapes feels like wasted time — even though Firewatch will run for only about four hours from first frame to last.

There’s a lot of talent at Campo Santo working on Firewatch, but the team’s first effort struggles to find its legs. It doesn’t quite have the writing chops to be a strong mystery, and it doesn’t bring the gameplay chops to make you feel like you’re an integral part of it. As a character drama, it lands closer to the mark, but spends too much time meandering in the woods. Firewatch comes off more as an experiment than a fulfilling game, and despite being beautiful and often compelling, it mostly smolders rather than catching flame.