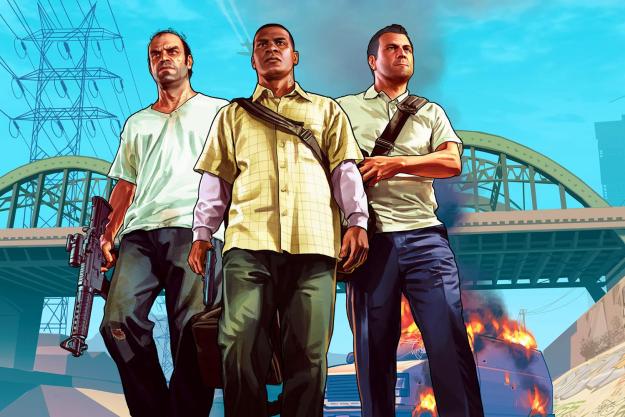 “Grand Theft Auto V is a monumental success for Rockstar Games, a series-best effort that no fan should ignore.”

As a series, Grand Theft Auto has always struggled with a basic divide between the dictates of the story and the freedom afforded to its players. It’s hard to identify with even the most sympathetic sociopaths in these power fantasies when plowing through a pedestrian-filled sidewalk feels inconsequential, to the point that it becomes background noise to the player.

The three protagonists in Grand Theft Auto V – killers and thieves all around, same as it ever was – actively question their reality again and again throughout the story. You might not worry about the multitude of blood-soaked victims piling up behind you as you tear through the streets and dirt roads of Los Santos, but these guys do to some extent. That they keep pushing forward is largely irrelevant; that’s your fault, after all. They’re aware of their actions, however, and while they don’t necessarily feel remorseful, they do take the time to ponder what it all means.

This helps to ground them, to humanize them. You can’t stop yourself from liking these guys. Even the crazy one. You might even hate yourself a bit for causing such mayhem through them. It doesn’t matter that they’re painted in the thick strokes of pop culture satire; protagonists Franklin, Michael, and Trevor – whom you can switch between at will, save for the occasional story limitations – are fun to hang with.

Move over, Tommy Vercetti. Your reign as fan-favorite psychopath of the GTA universe is done.

Michael and Trevor have history. They’re pals from the old days, before Michael went into witness protection. They know their way around a heist, and they share a love for the thrill of a big score. Michael brings a talent for planning, while Trevor… well… Trevor’s just crazy. He acts without hesitation, and things usually work out in some favorable way.

The city of Los Santos and its surrounding countryside is… just as vital a character as the trio you’re in direct control of.

Franklin is an outsider. He’s a boy in the hood, but he’s tired of the life. He knows that two-bit stickup men generally don’t have much to look forward to, unless you count an early retirement at the business end of a police officer’s pistol. He wants to break out of his dead-end existence, and a chance encounter with Michael establishes what quickly becomes a mentor/mentee relationship.

Grand Theft Auto V‘s plot is the stuff of blockbuster crime dramas. Our starring trio pulls off heist after heist; first, to get out of a tight spot and later just for the thrill of it. There’s plenty of conflict throughout. More than one antagonistic force is threaded throughout the story, but at its heart, GTA V is about three bros bro-ing it up, grand larceny-style. The only true “villain” is the lingering threat of poverty. The cash must flow, because how can you possibly have any fun without it?

Planning a big score in GTA V is a multi-hour process that always starts the same way: your crew gathers together around a bulletin board filled with intel. You hire a crew, choose an approach – each heist has two, which can usually be summed up as “quiet” or “loud” – and gather any materials or equipment you might need. Then there’s the heist itself, usually a multi-stage, multi-checkpoint affair involving the planning, the actual robbery (complete with a satisfying, ever-rising cash tally in the bottom corner of your screen), and the getaway.

It’s worth noting that the quality of those getaways, and of driving around Los Santos in general, is aided by a vast improvement over GTA IV‘s driving mechanics. What you lose in the realistic heft that Liberty City’s two-ton automobiles offered, you make up for in the satisfyingly smooth handling of even the most cumbersome cars and trucks. Cutting through Los Santos traffic at high speeds is an absolute pleasure.

If there’s any major shortcoming, it’s that we don’t see enough of the heists. They’re the undisputed highlight of the story, an escalating series of capers that are worth every minute you’ll spend replaying them just to try the other option – all missions can be replayed from the pause menu. The game sets up a great framework for planning and executing these heists, but then it binds them all to the story. This guarantees that they’re all carefully scripted for maximum enjoyment, but not being able to pick your targets also diminishes the sense of freedom that GTA is so famous for. You can knock over the odd convenience store for some quick cash, but any heavy planning or crew hiring is subject to the demands of the plot.

That said, the setup of the heist planning sessions coupled with the fact that your hired help levels up from job to job suggests that we haven’t seen the last of heists in GTA V‘s Los Santos.

The city of Los Santos and its surrounding countryside is, as ever for a GTA game, just as vital a character as the trio you’re in direct control of. There is a stunning amount of detail spilling across GTA V‘s world. Each neighborhood and region carries its own personality; the architecture, the pedestrians, even the graffiti and advertisements splashed across buildings are all an extension of that personality.

This holds true even once you get outside of the city. Los Santos occupies just one-third of the overall map. You’ll ride ATVs over rolling hills and desert dunes, scale towering mountains on foot or via cable car, and explore an entire sea floor with a scuba tank on your back. There’s a wide and varied world waiting outside the limits of the city, and many locations that you may never visit unless you happen to wander into them.

Even with the large map, GTA V is just as dense with content as GTA IV was, if not more so. You’ll play tennis and golf, you’ll go to the movies, you’ll hold up convenience stores and gas stations for extra cash. Watch TV. Play the stock market. Purchase commercial and residential properties. Meet the odd denizens of Los Santos in optional “Strangers and Freaks” side missions, found in-game at question mark icons (much like Red Dead Redemption). You can even visit Michael’s shrink for regular glimpses into the psyche of this unusually self-aware video game character.

Exploration ends up being its own reward. Rockstar smartly chose to leave the world of Los Santos open from the start, doing away with artificial barriers like closed bridges. The tradeoff is a fog of war that covers the entire map, peeling away slowly as you delve further into GTA V‘s massive world. Technical glitches and hiccups only occasionally sully the beautiful landscape; you might see an odd texture coloration or get hung up on a piece of scenery, but there are impressively rare instances given the size and the scope of things.

As impressive an achievement of world-building as Los Santos is, it’s Franklin, Michael, and Trevor that really bring it to life. Each character comes from a different background and carries a different perspective on the world. Gameplay and presentation blend seamlessly with the three individual personalities, and the result is remarkably effective.

Franklin is the closest to being a traditional video game protagonist. He’s not exactly a blank slate, but as the youngest of the three and the one with the most to learn, he’s the easiest to identify with. He’s a two-bit crook when we meet him, boosting cars semi-legally as a repo man for a corrupt car salesman. His special skill – each character has one, activated by pressing down on both analog sticks simultaneously – slows down time when he’s driving.

Michael is the sensible one of the group, a husband and father stuck dragging along the baggage of a shady past. He’s good at what he does and he’s fully aware of it, but not in an overly cocky way. He can see all the angles in any given pressure situation, and his ability to slow down time when he’s on foot is an outgrowth of that. Michael is also the most conflicted in the group about what he’s doing. He knows he’s not perfect, and he’d really like to be a better person, both for himself and his family. You can’t help but like the guy.

Finally there’s Trevor. The crazy one. Loud, abrasive, pocked with the ugly scars of a regular hard drug user, Trevor is the big, bad nutball waiting for you in any given city’s dark alley. He’s a tricky character to write for because that edginess is tempered by a strong sense of loyalty to his people. He’ll happily abuse his friends, both verbally and physically, but they’re all safe in the sense that they can trust him to not thrust blades in their general direction. His unhinged personality is reflected in a special ability to increase damage dealt and decreases damage absorbed.

It’s more than just functional gameplay elements setting these characters apart. The aforementioned Strangers and Freaks missions are individually tailored, so Trevor’s encounter with pro-marijuana lobbyist is going to differ from Franklin’s and Michael’s. Pedestrians react different to every character too. Hell, even the dynamic musical score, from the triple threat of Woody Jackson (Red Dead Redemption composer), Tangerine Dream, and Alchemist & Ohno, is used to key into Trevor, Michael, and Franklin’s personalities, respectively.

On a purely functional level, GTA V falls closest to its immediate predecessor. The hefty feeling that GTA IV‘s cars had has been toned down significantly, but characters still move and react like a physical presence within the environment. Combat feels like a natural evolution of what we saw in Red Dead and Max Payne 3; weapons fire feels more impactful than it did in GTA IV, though skills also play a role in that.

That’s right: each character has a set of skill bars that dictate how well they drive, shoot, fly, hold their breath, and so forth. Improvement comes through repetition, though you can speed it along by completing the occasional challenge (say, at a flight school or shooting range). It’s an easily ignored facet of the game, but it adds an extra layer for min/max-ers that want to sink the time in.

Grand Theft Auto V hits a high point in Rockstar Games’ long-running series. The three characters at the center of the story are the most immediately engrossing that we’ve seen from this team. There’s a seamless interweaving of game mechanics and presentation with each individual personality, and the rich world of Los Santos provides a perfect backdrop for their antics. Even without the presence of GTA Online – a separate multiplayer component that launches on October 1, 2013 – this feels like a complete game.

(This game was played on an Xbox 360 using a copy provided by the developer.)

The alleged Grand Theft Auto 6 leaker is already under FBI investigation
Rockstar says Grand Theft Auto 6 leaks won’t have ‘long-term’ effects on development
Early Grand Theft Auto 6 footage reportedly leaks after major Rockstar hack
PlayStation Plus is adding the Yakuza series. Here are what tiers you’ll need
Pokémon Scarlet and Violet: How to beat the Elite Four
The best Intel processors for 2022
Call of Duty: Warzone Mobile: release date and preregistration details
Monster Hunter Rise is coming to PlayStation and Xbox, minus cross-platform saves
Best gaming laptop deals: Save on Alienware, Razer and more
‘Wordle’ today, December 2: Answer, hints, and help for word of the day (#531)
Elden Ring for PS5 is $15 off with delivery in time for the holidays
The best iPhone games to play in December 2022: Marvel Snap and more
The best Android games available right now (December 2022)