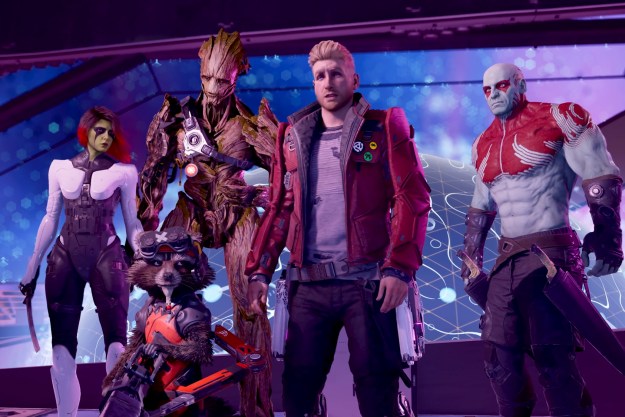 “Marvel's Guardians of the Galaxy has some rough edges, but its solo team play mechanics are a perfect match for the dysfunctional superhero family.”

Iron Man has a suit of armor. Thor has a magical hammer. The Guardians of the Galaxy have huge egos.

In their first video game adventure, the aptly titled Marvel’s’ Guardians of the Galaxy, the misfit superhero team’s cockiness is on full display. They quip their way through combat, as if every battle is a company softball game. They bicker with one another over who’s better at killing sentient gelatin cubes. At the center of it all is Star-Lord, who’s given the most difficult task a leader could face: Team management.

Marvel’s Guardians of the Galaxy is a clever superhero game that ditches genre expectations in favor of gameplay mechanics that better suit its oddball squad. The “solo team play” is a well-executed riff on Mass Effect that works both in and out of combat. An unpolished, bug-ridden package drags the team down, but Guardians fans will be delighted by how much detail the game packs into its story.

On paper, Marvel’s Guardians of the Galaxy is a tough sell. A Guardians game where you can only play as Star-Lord while issuing commands to seemingly more fun heroes like Rocket Raccoon and Groot? The fact that it’s a single-player game with no co-op play sounds like a misstep at first glance. Fortunately, Eidos-Montréal made the right call here — and it’s an inspired one at that. This isn’t a game about replicating Hollywood power fantasies, but showing just how tricky it can be to manage oversized personalities.

The game successfully borrows ideas from both Mass Effect and Telltale’s titles to create smart team-management mechanics. For example, crew conversations are filled with dialogue trees that create impactful decisions down the line. In one sequence, Star-Lord needs to buy Rocket enough time to hack a system by distracting a villain with annoying questions. When I successfully manage that (I’m an expert on being annoying), I actually get to see it change the mission later on, making me feel like a successful team leader.

There’s emotional resonance to some of the choices, too. When Drax tries to chuck Rocket over a cliff to extend a bridge, I’m presented with the option to egg Drax on or defend Rocket. I choose the latter and am told “Rocket will remember that.” While I’m not sure how it ultimately affects the story (the ending is the same no matter what you choose), I do feel like Rocket trusts me more after that moment. There’s a genuine sense of team-building throughout the adventure as I carefully navigate how to diffuse tense situations and hurt feelings.

The team may bicker and yell at one another, but they’re stronger together as one dysfunctional family — and the game itself plays better if you accept that, too.

Team management is just as well-thought-out in combat. Star-Lord can essentially direct traffic during fights by opening up a menu and commanding each of his four teammates to execute moves, which have cooldowns. Each character has their own specialty; Groot is a sort of defense character who uses his roots to hold enemies in place, while Gamora delivers close-range heavy attacks. By the time I have everyone’s abilities unlocked (each character gets four abilities), I know everyone’s role and I’m able to direct the action according to their strengths.

It’s fortunate that controlling other characters is fun, because Star-Lord’s own move set isn’t terribly exciting. He can shoot guns or punch enemies with weightless melee attacks that would make Spider-Man scoff. There’s a bit more depth once he gets elemental gun abilities, like an electrical shot that can stun enemies in place, but his strengths are more as a conductor than a soloist.

That’s kind of the point, though, and it’s exactly why Guardians works. If you ignore the other characters and treat their abilities as optional, Star-Lord will get absolutely destroyed in battle. He needs Gamora, Rocket, Drax, and Groot just as much as they need him. The team may bicker and yell at one another, but they’re stronger together as one dysfunctional family — and the game itself plays better if you accept that, too.

While the game likely wouldn’t exist if it hadn’t been for the surprise 2014 hit film Guardians of the Galaxy, the video game version is much more committed to the team’s comic book origins. It tells a loaded, galaxy-spanning story that’s full of characters, locations, and outfits from the comic. It almost like developer Eidos-Montréal assumed it wouldn’t get a sequel and tried to cram as much history in as possible, making it feel like a definitive adaptation (complete with talking cosmonaut dogs).

All the Easter eggs don’t get in the way of what’s a surprisingly touching story where every hero gets a full arc. While there are plenty of ironic jokes, the sincere moments are where the story shines. One plot thread sees Rocket Raccoon having to overcome his fear of water. It starts as a running gag that the team uses to poke fun at Rocket, but turns into a pivotal moment of character growth. The Guardians have always had a plucky underdog vibe and its genuinely novel to play a superhero game that prioritizes personality over powers.

The character arcs work especially well thanks to the game’s strong voice cast. While the actors take some cues from their film counterparts, it doesn’t feel like anyone is doing an impression here. Nolan North effortlessly balances the comedy and tragedy in his portrayal of Rocket Racoon, while Adam Harrington pulls a whole range of emotions out of the phrase “I am Groot.”

The game’s comedic moments are more of a mixed bag than its tender ones. Not because the script isn’t funny, but because there are just so many jokes. The Guardians constantly quip no matter what they do. There’s rarely ever a moment where there’s no dialogue happening, with conversations often butting into one another and stopping abruptly because another one has triggered. It’s impressive that there’s so much unique dialogue in the game — I rarely ever hit repeat lines during my playthrough — but the barrage of one-liners from characters who are constantly shouting can be grating. The first Guardians movie is a laugh riot, but imagine if it continued at that pace for over 16 hours.

It almost like developer Eidos-Montréal assumed it wouldn’t get a sequel and tried to cram as much history in as possible, making it feel like a definitive adaptation.

One movie influence that does work is the game’s reliance on ’80s music. When a special meter fills up in combat, Star-Lord can call the team together for a group huddle and craft a motivational speech based on the team’s needs. Doing so gives everyone a temporary damage boost, but also causes a song to play over battle. There’s a true joy in being in the middle of a tense fight against a towering boss, only to have the dramatic score replaced with Don’t Worry, Be Happy.

While the whole experience can feel like sensory overload at times, with the dial constantly cranked to 11, it’s exciting to see a superhero game with such a unique sense of style. There’s a clear reverence for the source material here and the game feels just as much like a historical celebration of the franchise as it does a fitting entry into its ever-expanding lore.

The Guardians fight plenty of menacing supervillains throughout their adventure, but they can’t take down the most powerful baddies of all: Bugs. Not like insects — they kill plenty of those. But Marvel’s Guardians of the Galaxy is a disappointingly unstable affair. From graphical hiccups to bugs that require a checkpoint reload, there’s a sense that maybe Square Enix should have taken every other 2021 game’s lead and delayed this one a bit.

Some bugs are ridiculous, but not game-breaking. In one cutscene, I’m walking around a prison cell in first-person. I push against the bars and suddenly my very realistically rendered eyeballs pop out from my head in front of me. Disturbing, but minor. Other issues are more egregious. Sometimes dialogue boxes will just remain on screen until I reload the game. Other times, I’ll find myself locked in a battle encounter because an enemy has disappeared, but the game still thinks they’re alive. A day one patch is going to fix some of its more serious issues, but there’s no doubt that the game will need some fine-tuning before it’s a smooth experience.

Bugs aside, it’s a visually inconsistent title, too. It can be a real treat at times, with vibrant alien planets drenched in a bright pink and purple color palette. Other times, it seems clear that the game is a sort of awkward holder of the current console generation transition. Faces can look a bit creepy, while big visual effects like explosions can be rough around the edges. It’s not a deal breaker, but the superhero genre lives and dies by spectacle. Guardians of the Galaxy delivers some Hollywood thrills, but its budget feels stretched thin at other moments.

From graphical hiccups to bugs that require a checkpoint reload, there’s a sense that maybe Square Enix should have taken every other 2021 game’s lead and delayed this one a bit.

The best comparison I can make here is to Star Wars Jedi: Fallen Order. That game had an arc that I imagine will happen with Guardians. The core game was a lot of fun, but it launched in a buggy state that had players writing it off. These days, it’s the kind of game that players will emphatically recommend to others whenever it’s on sale. I imagine that’ll be the case here, too. You may ignore Marvel’s Guardians of the Galaxy at launch, but there’s enough heart, charm, and creativity here to turn it into a holiday season underdog. Fitting, don’t you think?

Marvel’s Guardians of the Galaxy doesn’t do what players might expect — and that’s for the best. By focusing on team management, Eidos-Montréal is able to expand on games like Mass Effect in creative ways. Directing traffic in battles is a rewarding experience and dialogue choices actually carry emotional heft. It’s not the cleanest experience. Bugs, graphical hitches, and weak Star-Lord combat make it feel like it could have used more time in the oven, but it’s exciting to see a Marvel game that gives a lot of thought to what mechanics best suit its heroes.

Marvel’s Spider-Man: Miles Morales is a really tight superhero story that’s much cleaner on a technical level. If you want multiplayer, Marvel’s Avengers is available on Xbox Game Pass now.

There are 16 chapters total, with each averaging around an hour. The whole adventure takes between 15 and 20 hours, depending on how thoroughly you hunt for collectibles.

Yes. While it’s rough around the edges, Marvel’s Guardians of the Galaxy is a charming superhero game with a lot of fresh ideas — and plenty of Easter eggs to keep Marvel fans on their toes.