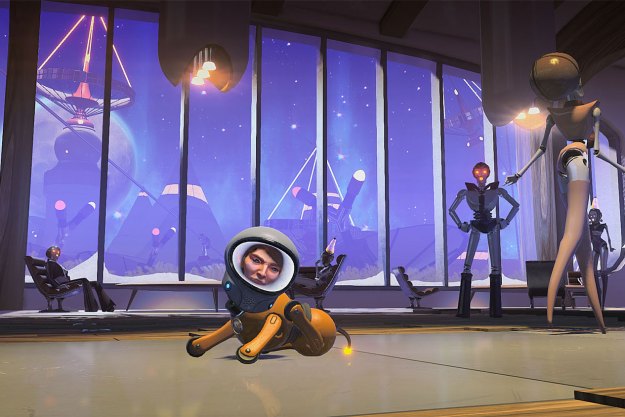 You wake up from cryogenic slumber as a disembodied head in a space helmet. It seems like the start of a very bad dream. But don’t worry — you have a rocket booster on your neck to help you zip around, and you can take over robots by replacing the head on their shoulders.

Headlander, a side scrolling Metroidvania (Metroid/Castlevania) game from Double Fine Productions and Adult Swim Games, takes that premise and runs with it. The game is just as silly as the name suggests, though not quite as funny as you might hope, particularly given who made it. Fortunately, Headlander is an otherwise tight, charming, and fun little game that doesn’t take itself too seriously or outstay its welcome.

In the future, humanity has poisoned the Earth beyond habitability, and so people have taken to live among the stars in space stations. In order to make this more palatable, everyone has given up cumbersome meat bodies for sleek robotic chassis.

The price for immortality, however, is that everyone has been reduced to docile consumers at the whim of an artificial intelligence named Methuselah. As the last flesh-and-blood (sort of) person left, it’s your job (as prompted by a mysterious voice named Earl and a faction of rebel women) to free the human race from its dystopian numbness.

As a co-production of Double Fine (founded by Tim Schafer, who’s best known for his comedic writing in the Monkey Island games and Psychonauts) and Adult Swim Games (gaming spin-off of the late night stoner comedy block that gave us Aqua Teen Hunger Force and Rick and Morty), Headlander has a strong comedic legacy to live up to. It’s funny – but never as side-splittingly hilarious as both of its creators have been known to be. The game compensates for that with a story that is surprisingly earnest in its critique of media and technological alienation.

The game draws heavily from 70s science fiction classics like Logan’s Run, Barbarella, and Sleeper, both thematically in its ostensibly utopian society with sinister underpinnings, and aesthetically with its clean, white, rounded, retro sci-fi style. Wry, specific references pepper the environments and dialogues for genre fans, but aren’t so common that those less familiar might feel lost.

When a head meets a body, comin’ thro’ the rye

Being a head on a jetpack gives you a lot of freedom, but also makes you vulnerable. While you can fly through the station’s service ducts as a head, the station’s crotchety doors (calling back to The Hitchhiker’s Guide to the Galaxy) won’t recognize you without a body. Acquiring one is as easy as sucking the current head off a robot with your tractor-beam-like vacuum, or shooting it off if you’ve already jacked another body that’s armed.

Headlander is [a] tight, charming, and fun game that doesn’t take itself too seriously or outstay its welcome.

Regular citizens and dogs can walk through standard grey doors. But in order to reach the station’s more secure areas, you’ll need to hijack the bodies of Shepherds, who serve as Methuselah’s security force. They are color coded in rainbow order from Red at the bottom up to Purple at the highest clearance level. Shepherds of ascending color rank can pass through doors of their color and each color below them. Their laser shots will also ricochet one additional time for each rank.

It’s an elegant system that ties your relative power level to your progression through the space. Upgrade points earned through play can also unlock additional abilities that give access to more secret areas, but backtracking is minimal. Secrets are generously scattered throughout the game, with hidden nooks and passages leading to upgrades to your abilities (like increasing your health or the power of your head’s rocket boost).

There’s a handful of side quests to occupy you. Mostly, people scattered around the station will ask you to find particular bodies for them. But these extras are strangely few-and-far between, and feel like an afterthought.

While the moment-to-moment gameplay can devolve into frenetic gunfights, the focus is more on puzzle solving than action. Headlander is all about discovering which bodies you need, and from where, in order to progress. The game automatically saves in every room, so mistakes are never punished too severely.

This breaks down slightly at its two major boss fights. Each with multiple phases, these challenges ostensibly do what boss battles should by testing together all of the skills you have independently developed over the course of play. The difficulty curve is so steep here, though, that it can become frustrating when you die in the final phase and need to repeat the whole ordeal over and over again.

Minor quibbles aside, Headlander is a charming game that works very well within its scope. Adult Swim and Double Fine have taken a silly premise and executed it elegantly from a mechanical perspective. Of Double Fine’s smaller projects in recent years, it is one of the most coherent. This is gimmick-driven gameplay done right, following an idea through to its natural conclusion without forcing anything more out of it.

Headlander was played for review on PC with a code provided by the publisher.