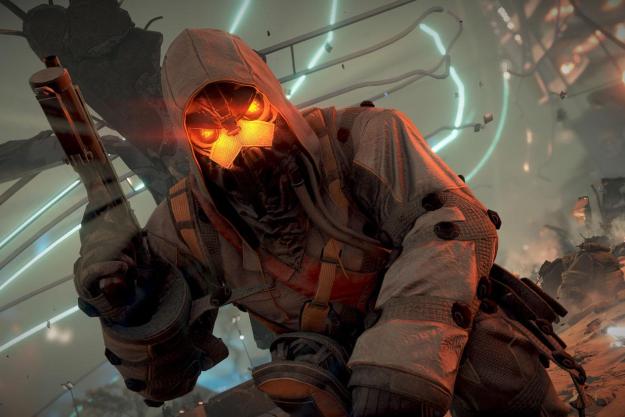 “The future of first-person shooter looks an awful lot like the past.”

One of the legitimate knocks against the PlayStation 4 is its underwhelming launch lineup. There are several major franchises on the list, but most of them are upgraded versions of multi-platform titles that were already released. That may satiate people for the moment, but with two major consoles being released a week apart, having exclusive content goes a long way. That’s where games like Killzone: Shadow Fall come in.

The Killzone franchise has been an exclusive series on PlayStation devices since the original debuted on the PlayStation 2 back in 2004. A decade later the franchise has released six games on a variety of Sony platforms. Five of those focus on the all-out war between the bitter and mutated Helghast and the Interstellar Alliance (ISA), with most of the conflict unfolding on the neighboring planets of Helghan and Vekta. Shadow Fall resets that story, creating an entry point for new fans, but in the process it also sacrifices some of what made the series so gloriously over the top in the past.

This is a next gen exclusive, so you’d expect something you’ve never seen before.

Shadow Fall takes place 30 years after the end of Killzone 3, which saw a definitive end to the war. In the years that followed, Helghast refugees were allowed to settle on Vekta, but the two societies, unable to co-exist, were kept apart by a heavily fortified wall. Think the Berlin Wall, but on a planetary scale.

The two sides are polar opposites. The Vektan community is prosperous, clean, and filled with happy citizens. The domain of the Helghast is polluted and grimy, with citizens living in squalor and struggling to survive. It makes for an interesting contrast, even though it’s hard to see how a wall would do much to separate two space-faring societies.

You step into the boots of Shadow Marshall Lucas Kellan, a survivor of the first Helghast raid on Vekta (which occurred during the events of the first game), and a protégé of the head of Vektan Security. After an attack on the Vektan population, the war is primed to begin again, but Kellan and a half-Helghast operative named Echo discover there is more to it. They team up to find the truth and prevent a war.

Shadow Fall sets the stage well and creates an interesting backdrop, but it never offers more than a superficial look at the world it spends so much time setting up. Entire missions exist to put you through an hour-long firefight, just so you can interact with one computer. That computer then leads you to a completely different location, where you do pretty much the same thing. There is no filler, and the campaign often feels hollow as a result. An hour of gunplay to justify one minute of light exposition does not make for an engaging story. By the time you reach the finale’s telegraphed (and even somewhat contradictory) twist, you may wonder if you missed a chapter.

You’ll have a handful of in-mission objectives, but they also fall on the simplistic side. To open a door you need to hit switch A then switch B. To leave an area you need to blow up two objectives. Completing these objectives is usually as simple as hitting a button, so it tends to feel like busy work mixed with tons of gunplay. Many of these missions seem designed more to show off the graphics by taking you to interesting looking locations than to actually make for compelling gameplay.

For example, you inevitably find yourself in the Helghast controlled section. It is beautifully designed, with moving backgrounds giving you the sense that you are in an active city. You also encounter plenty of citizens as you make your way around, but none of it actually adds anything to the game. You can’t interact with the citizens, nor do the backgrounds end up meaning anything. Again and again you see things that look intriguing, but the game does nothing with them. They are background, nothing more.

There are some highlights though. It may be a bit tedious to slog through unimaginative objectives, but maps are vast and highly detailed, with plenty to see – if not do. There is also some exploration to engage in, as a few of the bigger maps don’t spell out exactly where you need to go. Shadow Fall is still a linear game, but it is a linear game with occasional bouts of open-endedness. You are eventually funneled to a single point, but there are typically a few ways to get there.

The biggest problem with this is simply the familiarity. This is a next gen exclusive, so you’d expect something you’ve never seen before. There are a few moments where Shadow Fall introduces an original gameplay element, like fighting through a ship headed toward the sun and shooting out shields to use sunlight as a weapon, but they are few. Even with the possibilities created by the new hardware, Shadow Fall introduces very little you haven’t seen countless times before in other FPS games, right down to the Call of Duty-like controls, replacing the previous Killzone-specific set (although they are still available in the options under “classic.”

One original feature you have in your arsenal is the OWL, an aerial companion that rests on your back when not in use. The OWL can set up a shield for you, attack other enemies, or create a zipline at specific locations, and you choose the function by swiping your finger on the DualShock 4’s touchpad. It doesn’t last long under fire before it needs to recharge, so its use is limited. Think of it as a replacement for a secondary piece of equipment like a concussion grenade.

The AI is also problematic. At times it is astonishingly smart. Enemies take cover, work in pairs, and don’t stay in the same place for more than a few seconds. They will also wait for backup and then try to flank you. Other times, the enemy might literally drop prone right in front of you, miss every shot, and then look at you awkwardly as you shoot them in their head. Others will simply stand in the open and wait for you to shoot them. It’s a bizarre mix. When it works it is challenging and keeps you on your toes. When it doesn’t it is dull.

Hardcore multiplayer fans are likely going to love the range of options.

The multiplayer, dubbed Warzones, does help to breathe some life into the game. There are eight rotating mission types: some feature familiar objective-based goals while others are unique game modes, like sniper rifles or pistols only. In matches like this you are limited to whatever the game mode determines, but generally you have three classes to choose from: assault, support, and recon.

Warzones unlocks all 22 weapons available in multiplayer from the start. Instead of earning experience, you complete challenges to level up abilities. While that’s nice in theory, there is a reason that the vast majority of multiplayer games out today feature a progression system. People like working toward a goal; it’s human nature. Unlocking an item or perk you earned though hours of play is a thrill. If you enjoy earning experience, Shadow Fall may not be for you.

Ultimately that comes down to personal preference. There are also some balance issues that need to be addressed, as some weapons feel far more powerful than others. This is a common problem with multiplayer games though, and will likely be addressed quickly in an upcoming patch.

The big draw of the multiplayer is the ability to customize games to your liking. You can choose the maps you want in your rotation, the game modes, the weapons, what perks players can assign, and more. If you want everyone to run around with stealth cloaks on and knives only, you can do that. If you want half your team to be bots, you have that choice as well.

Hardcore multiplayer fans are likely going to love the range of options, especially if they are already familiar with the franchise’s multiplayer, though casual fans may be overwhelmed. Jumping into a custom game designed by people that know exactly what they want can make for a steep learning curve if you are new to the game and the series.

Killzone: Shadow Fall uses the PS4’s hardware to offer a very pretty game, but strip that away and it’s just like many others before it: a serviceable shooter with an underdeveloped storyline and spotty AI. That doesn’t make it bad, just a little boring. The multiplayer is a bigger draw, but it will require patience. The best bits hint at a strong future for the PS4, but Shadow Fall will likely be forgotten as soon as the next wave of FPS titles is released.

This game was reviewed on a PlayStation 4 using a copy provided by Sony.