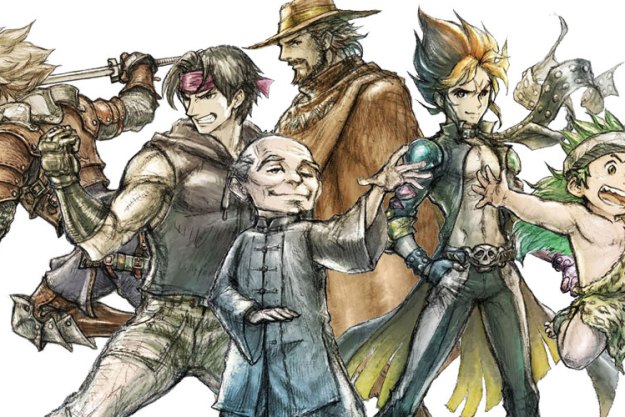 “Live A Live is a high-effort remake from the presentation side, though the base game remains an uneven RPG experience.”

The original Live A Live launched on the SNES in 1994 but never left Japan … until now. A new 2D-HD remake, released exclusively on Nintendo Switch, brings the influential RPG to the West for the first time ever. With a cast of different characters, the game tells eight separate stories before bringing all of them together. When it first released, this storytelling structure was ahead of its time.

Each of the characters in Live A Live occupies a certain setting and point in time, such as Pogo in the prehistoric times when speech was still primitive, and Cube in the distant future where space commerce is the norm. Each chapter featuring a character has a unique gimmick, such as the Edo period Shinobi’s being a full-fledged dungeon crawler, and the near future Akira’s having an overworld to roam around in similar to classic JRPGs like Final Fantasy.

Live A Live’s greatest asset though, is its fun turn-based battle system. But like its slow-building story, that system takes too long to reach its full potential.

Some of its chapters especially stand out.

The game does a great job of presenting different mechanics in each chapter to mix up the gameplay. Some of its chapters especially stand out. Masaru Takaharu’s tale is an incredibly fun one, as he competes in a global tournament to become the world’s strongest fighter. His gameplay is set up like a classic fighting game, similar to Virtua Fighter. Here, Masaru can select his opponents from a fighter select screen and even learn his opponent’s moves and retain them for future use. These ingenious mechanics make the chapter feel entirely distinct from the rest of the stories.

While most of the chapters are enjoyable, some miss the mark. I found the Wild West chapter boring, with its character Sundown underdeveloped. His chapter’s mechanic of setting up traps isn’t too strong a hook. On top of that, the chapter itself is short, failing to fully develop the system.

The overarching narrative that brings all the characters together after completing their individual stories isn’t all that impressive. It’s a standard plot of banding together to defeat a big evil bad guy that strayed away to the dark side. However, the final chapter is also where the real fun begins.

You can pick a lead character to go into the final chapter, and then find the rest of the cast as they are scattered across the area. This allows you to customize your own party with your favorite characters. The final chapter is filled with extra dungeons and end-game equipment so that you can prepare to take on the final boss. It’s here where the battle system really comes together as players gain access to all the characters and systems at once. It’s just a shame the RPG saves its best moments for last.

The battle system utilizes a turn-based structure on a grid. Both allies and enemies each have a Charge gauge, and when a unit’s gauge fills up completely, it can perform an attack. The Charge Gauge increases by any sort of action, even simply moving across the battlefield. Additionally, each character learns different skills as they level up, with end-game skills being particularly flashy and powerful.

The battle system doesn’t reach its full potential until the end game.

The HD-2D remake aspect of Live A Live especially shines here, as these end-game skills look absolutely beautiful. Akira can summon a huge Angel to hurt enemies and buff his allies, while the Shinobi can hurl blades of darkness, slicing all of his enemies to pieces. The art direction makes every one of those attacks feel and look impactful.

Live A Live’s music is fantastic as well. The boss theme, Megalomania, accurately reflects all of the bosses’ gargantuan sizes and the intensity of facing them down. In particular, Akira’s and Masaru’s normal encounter themes stand out because of their energetic guitar riffs.

However, there are some inconsistent difficulty spikes along the way to the final chapter. Some characters have a much easier time fighting their respective bosses because they have easier access to healing items and moves than other characters. For example, I found the shifu’s boss to be difficult because it was a solo fight, and my character’s damage output was low, along with the fact that I kept getting KO’d in 3-4 hits.

On the other side of the spectrum, the Prehistory boss was much easier to deal with due to the story providing a full roster of four characters in battle, one being a healer. That’s why some of the chapters can be frustrating: The battle system doesn’t reach its full potential until the end game. When you have access to all of the characters in the final chapter, it suddenly becomes much more fun as you don’t have to worry about not having a healer.

Live A Live’s overall presentation going from the SNES to the Nintendo Switch is staggering. The graphics retain their original retro charm and the 3D particle effects that surround attacks contrast nicely with the 2D sprites. The aforementioned most powerful attacks in the game look absolutely stunning and the instrumentation in the re-recorded tracks sounds clearer than ever.

Live A Live is a high-effort remake that offers much more than you’d get from a fan translation.

There was great care in overhauling the user interface as well. The action menus that pop up during battle when selecting attacks or choosing items look modern, but the main menu outside of battle received the biggest improvement. In the original game, the main menu was bland. In this remake, it’s bursting with color.

There are individual icons for equipment, items, formation, and setting screens. The bottom right corner shows who is currently in your party and the sprites are automatically animated, bringing them to life. A fun detail is in the shifu chapter where the shifu stands still, completely calm as his disciples practice kicks or spar with each other. It adds a substantial amount of personality to the game.

There’s also full voice acting in the game, whereas the original didn’t have any. The performances are solid and there’s nice attention to detail in casting decisions. For instance, since the shifu chapter takes place in Imperial China, all of the main voice actors in the English dub cast are of Chinese or Asian descent. Details like that make Live A Live a high-effort remake that offers much more than you’d get from a fan translation.

Live A Live mostly accomplishes what it’s supposed to do: tell a serviceable story and back it up with engaging gameplay. However, the game takes too long to get to the best part, which is the final chapter when all of the characters are available to join a single party. Until then, a few of the character chapters can be slogs to get through. The visual presentation and music are great, though, making the journey to the end a treat for both eyes and ears.

The only game that comes close to Live A Live’s premise is Octopath Traveler, which is another HD-2D remake game. Octopath Traveler boasts better individual stories between its cast of characters and steadier battle system progression.

To complete the story and defeat the final boss, along with finishing the optional end-game dungeons, you’ll need around 25-30 hours.

Yes. Live A Live is perfect for any JRPG fan. It has the hallmarks that make it a good entry in the genre, especially a fun battle system, while also providing a much-needed presentation boost.

Live A Live was tested on Nintendo Switch.