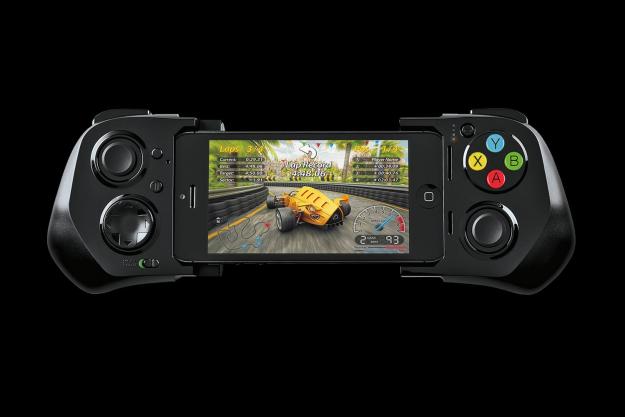 Gaming on-the-go got a boost from Apple with the addition of external controller support in iOS 7, and PowerA is one of the first to capitalize on it with the release of the Ace Power controller. Much like MOGA’s similarly (large) pocket-friendly Android controllers – right down to the built-in 1,800 mAh battery introduced in the latest model – the Ace Power is designed for your Lightning port-equipped mobile device to slot into, turning the whole assembly into a portable gaming device.

Fully collapsed, the Ace Power vaguely resembles a slightly stunted, downsized Xbox 360 controller. There are four face buttons, two analog control nubs, a concave D-pad, and four shoulder buttons, including two outward-curving triggers. Every single button on the controller is analog rather than digital, which allows games to tell how hard one is being pressed. While it’s nothing any of the current App Store offerings take advantage of (as far as we can tell), it’s a welcome bit of future-proofing. Mobile gamers are ready for an influx of new software built for the more robust 64-bit architecture of A7 CPU inside the iPhone 5/5S and fifth-gen iPod Touch, and MOGA’s controller is built to capitalize on that.

The Ace Power is a cradle for your mobile device rather than a fully separate external controller, and it slides apart to reveal a slot that your iOS device fits snugly into. The Lightning port connector limits the peripheral’s support to Apple’s latest hardware, but most games that can take full advantage of this controller won’t run well (or at all) on older models anyway. Either way, MOGA’s Ace Power is designed with an eye toward what’s to come.

It feels a little flimsy and loose before your phone or iPod is inserted, but that’s largely a result of the slide-to-slot design. Once an Apple device is seated and the sliding mechanism is locked (via a rear-mounted switch), the Ace Power feels like one contiguous piece of hardware; a solidly built, acceptably hefty portable gaming device. It’s a little too small for four fingers to comfortably cover all four shoulder buttons, but placing one on each shoulder allows for a more comfortable grip.

The built-in battery – which powers the controller and feeds juice to your phone/iPod – charges via a micro USB port situated next to the right-hand shoulder buttons. It’s tough to measure the battery life given the way the peripheral’s power distribution works. You can use the battery purely to keep the controller active, or you can flip a switch to keep your phone’s charge topped off as well while you play. It’s a handy bonus, since most use these Apple devices for more than just gaming.

While the device itself may be solid, the software support isn’t quite there yet. You’re at the mercy of developers patching their games, since there’s no option for custom-mapping controller function. Some games run beautifully, and are enhanced with the addition of console-style controls. Call of Duty: Strike Team is a highlight, with a control scheme on the Ace Power that almost directly mirrors Call of Duty games on PC and consoles. Bastion and Limbo are similarly plug-and-play, with control schemes comparable to their previous releases.

Unfortunately, the list of supported games is rather limited right now. For example, the upcoming iOS port of Grand Theft Auto: San Andreas is confirmed to include controller support, but earlier mobile ports of GTA III and GTA: Vice City don’t recognize the MOGA peripheral at all. It’ll be on the game developers themselves to patch controller support into earlier titles, but there are no guarantees. In other words: the MOGA Ace Power is set to enhance iOS gaming moving forward, but you might want to wait a bit if you’re hoping to use a controller with older games. Check out MOGA’s website for a compatibility list.

The Ace Power may be MOGA’s first crack at external controller gaming on iOS, but the design is solid and the hardware works as advertised. It’s a little too big to fit in a pants pocket, but not bulky enough to limit the overall portability. Just stuff it in your jacket or something. It’s worth it if you like to game on the go, and the situation will only improve as the game compatibility list grows.