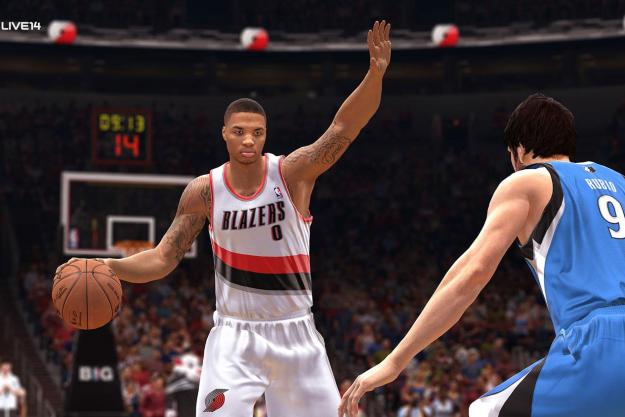 “A half-baked attempt to revive the NBA Live franchise should have waited another year.”

It has been four years since the last NBA Live game was seen on store shelves, and since then, a lot has happened in the world of NBA basketball games. 2K Sports’ NBA 2K franchise filled the gap masterfully, leaving Electronic Arts and specifically EA Tiburon in the unfamiliar position of playing catch up on a sports title.

The plan to bring back the NBA Live franchise has been in the works for a while now. EA sees it as a continuing franchise from the start (or restart), and the chance to debut alongside the launch of two new next-gen systems was apparently too good an opportunity to miss. Ultimately, that feels like a poor decision, as NBA Live 14 is a game lacking in several areas, all of which could have been helped by more time developing and expanding the features.

The first, unmistakable issue you run into is the graphics.

The first, unmistakable issue you run into is the graphics. They are easily among the worst of the launch titles (we reviewed the game on the PlayStation 4), and they are subpar by most current gen standards in several areas. There are flashes of the more powerful systems in things like detail in the fabric players wear and some of the lighting effects, but it stops there. Faces look bizarre and unnaturally formed, and crowds are lifeless and generic. That stands in contrast to EA’s other next-gen sports games, which put a premium on making the crowds seem more realistic, with individual movements and some variety in the faces.

Unimpressive visuals are a minor issue though, especially compared to the character animations. The majority of the time, players move with a believable gait, and movements are generally realistic, if a bit stiff. There are moments though when a player will jump towards another player, and almost fly a few feet to get there. Imagine a player under the basket going up for a simple layup, then a defending player jumps from the free throw line and is suddenly able to block your shot. This is especially problematic when shooting a jumper. Blocks are so common that it almost eliminates any mid-range attempts. Bodies also jostle around as if on ice, making defense and scoring in the paint a bizarre prospect, dominated by dunks.

The right analog stick allows for flashy dribble movements, and the left shoulder button acts as a modifier to expand that move set with Signature maneuvers. These controls are a highlight, but linking them together takes practice. When you get the timing down though, they are easy to abuse. Jump online and go head to head and watch another gamer make LeBron James dance in spins and stutter steps from the top of the key all the way through your easily confused AI teammates for an easy dunk.

Besides the dribble mechanics, the controls are simplistic, which may favor someone that just wants to pick up a controller and play right away. Shooting is as easy, as is passing.

The game comes with the standard exhibition game options, a franchise mode, a create-a-player, and an ultimate team – a meta game where you purchase player packs, hoping to get better players to fill out your team. Ultimate teams have become a staple of EA Sports titles.

It’s generally unfair to compare one game to another, but you can’t avoid it with NBA Live and NBA 2K.

The franchise mode also doubles as a GM mode. You start by selecting your team, then choosing what the team’s yearly goals should be. You can try to be competitive on a budget, build for the future by playing rookies and young players, or compete for a championship immediately. Each path brings with it challenges based on your choice, which means you can earn credits for things like playing a rookie for an average of 25 minutes if you are rebuilding, or keeping the salary cap under a certain amount if you are on a budget. There are dozens of challenges. You can use the credits you earn to upgrade the coaching staff in a variety of ways: improve your scouting for later seasons, hire better trainers to improve team conditioning, hire an offensive coach, and more. Each option has multiple levels to upgrade.

It is better than a dry franchise mode, but it is barebones. The actions you take are generally stat based, which makes it hard to immediately appreciate your efforts. There just isn’t much to it, especially compared to other sports games’ GM mode that lets you really feel like a GM in charge of all the details involved in running a club. The same goes for create-a-player.

You begin by choosing their look from a surprisingly limited set, with just a handful of options. You pick a body type and position, then jump into a rookie game to determine your draft status. You are then graded on obvious stats like points and rebounds, as well as things like solid defense and good ball movement to name a few. After that you are drafted and begin playing for your new team, which in turn earns you points to upgrade skills.

If that sounds familiar, it should. It is very similar to the create-a-player mode in the NBA 2K series, but it is devoid of any of the off-court stuff that make 2K’s mode feel RPG-like. The NBA Live player mode is similar to its competitor but offers nothing more, and quite a bit less.

It’s generally unfair to compare one game to another, but you can’t avoid it with NBA Live and NBA 2K. Even when you put aside things like the control scheme, which is ultimately down to a matter of preference, there are 1:1 comparisons to be made and they do not favor NBA Live 14. The game looks worse, and all of the modes in NBA Live 14 can be found in NBA 2K14 – but there are more of them, and more robust in 2K’s series. The one area NBA Live sets itself apart is the Live Season mode.

During the course of an NBA season, EA Tiburon will add challenges based on real games. One may have you try to make a last second 3-pointer as a particular player, another may have you try to score a minimum number of points in a quarter, while others still may start you out trailing and challenge you to make a comeback. Each challenge is accompanied by a brief description that tells you how the game unfolded in real life. For each successfully completed challenge, you earn a score that is ranked on a leaderboard. Within this mode, you can also play highlights from your chosen favorite team specifically. The constant updates and variety make this mode a highlight of NBA Live 14. Unfortunately it is one of the few.

The NBA Live series will continue on, that much has already been decided. It’s a shame EA Tiburon put out what feels like an incomplete game. When you are trying to compete with a rival that has not only had the market to itself for years, but also managed to put out exceptionally good games, you need to do better than release a pale imitation. The Live Seasons mode is a good start and the dribble controls offer decent depth, but everything else in this franchise needs to go back to the locker room and come out with a new game plan.

This game was reviewed on a PlayStation 4 using a copy provided by EA Sports.