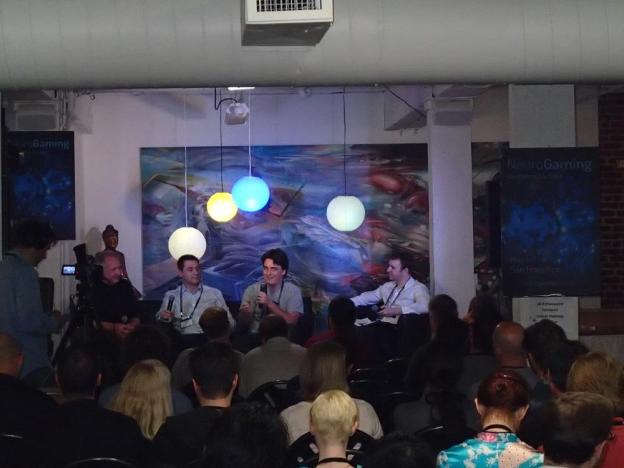 The Neurogaming Conference in San Francisco concluded today with a look at what is coming, and how neurogaming can benefit people beyond just gamers. Soon we will have to come up with a whole new batch of science-fiction concepts, because the things we once considered fantastic are quickly becoming reality.

Remember in Blade Runner when androids were revealed using the Voight-Kampff test? Questions asked during the test were designed to elicit responses from the test subjects while machines observed their physical mannerisms and brainwaves. At the time it seemed like a neat sci-fi device. Now, it is actually something we could do. All we need is androids. Get on it, Japan.

Combining brainwave sensors with monitors that can detect emotional reactions through things like the pH level in your sweat and the movements of your face, the technology is there to recognize and then adapt to your moods and behavior. That goes beyond gaming, though gaming is leading the way.

Games like Call of Duty feature campaigns that are too short and multiplayer that is too repetitive to help with cognitive training. The technology is there though, it is just a matter of keeping people interested and entertained. The more fun it is, the more people will be likely to play it and indirectly learn from it. When you make it less like a chore and more like something you would do for fun anyway, the results can be incredible.

Once you find the right balance, you can then use neurogaming to help train your brain. Certain games teach you meditative techniques. Others are designed to increase focus, and are used to address attention deficit hyperactivity disorder (ADHD). There are also military applications, both as a therapeutic treatment for post-traumatic stress disorder (PTSD) and as a way to sharpen reaction speeds and encourage teamwork.

Looking ahead, expect gaming technology to expand in ways that most people haven’t even considered. We are a year or so away from commercially available virtual reality; if a product like Oculus Rift takes off, it won’t be long before virtual reality is everywhere in gaming. What if you then also could use it to help addiction? Say someone is addicted to heroin and were able to use the lure of virtual heroin to wean them off of it. Another tool in the arsenal for therapists.

The general message to be taken from all this is simple: gaming is quite possibly the best thing to ever happen to humanity. Take that, Congress.

Maybe that’s an overstatement, but gaming is leading the way in neurological technology development. We love our capitalism, and gaming makes money. There is a clear path to recouping cash when it comes to developing tools for gaming. Spending millions to develop something that exists specifically to help kids with ADHD, on the other hand, is a harder sell. It’s just not realistic. However, if the technology is already there (again to our friends in Congress, thank you gaming) and it just requires modification, the possibilities expand.

Consider Palmer Luckey’s creation, the Oculus Rift. If you follow gaming, you probably already know a fair amount about the  VR headset and its Kickstarter success. If not, take a moment to check out our recent hands on from GDC, or our even more recent hands on with the EVE Online-based space dogfighter, EVR. Go ahead, this article will keep. Oculus Rift is awesome.

Now that you’re up to date, know that you’ll see a consumer version of that headset next year, with developer kits available for pre-order now. Once it’s on the market and a proven success – yes, that’s a prediction, but it’s an easy one to make – others will likely rush their own VR headsets to market. Sony and Microsoft won’t pass on an opportunity to launch their own versions, proudly selling them to the console faithful as the best thing ever while PC gamers are once again left shouting that they had it first, and are once again ignored. The future is VR, but the future is only a year or two away.

Then there’s the tech that builds on the total visual immersion that headsets off. Things like olfactory output devices that incorporate your sense of smell into the game. Consider walking through a forest when the sudden sharp smell of sulfur alerts you that a demon is about to attack. This technology will almost certainly be abused when people learn how spread the smells that they create, but sacrifices in the name of science must be made.

Then there are headsets that hearken back to Blade Runner with their ability to read your physiological responses. Those are not as theoretical as you might think. The technology exists, but it is still in a primitive form. We don’t even have the human brain fully mapped. The quickest route to breakthroughs in medical research will come from commercial development. As usage of the technology increases among companies and individuals, the pace of growth will increase exponentially.

The Neurogaming Conference is now concluded, and it highlighted a corner of the interactive entertainment industry that is still in its infancy. History will tell if it comes to mean anything or if it’s just another gimmick, doomed to a distant shame-hole next to Nintendo’s Virtual Boy and E.T. the Extra-terrestrial for the Atari 2600. Hopefully it will build from this foundation and return next year on an even bigger stage. The technology threatens to have an impact on all levels of human growth. Science fiction is now science fact, and it won’t be long before we regard it as science past.

Don’t miss this Xbox Series S Cyber Monday deal — ends midnight
How to redeem Mystery Gifts in Pokémon Scarlet and Violet
How to get Battle Tokens in Warzone 2.0
Starship Troopers: Extermination turns sci-fi satire into a co-op shooter
Score $90 off an Alienware gaming chair for Cyber Monday
Call of Duty: Warzone 2.0 desperately needs to give players more health
Now’s the perfect time to stock up on PS5 controllers
How to evolve Tandemaus into Maushold in Pokémon Scarlet and Violet
Fortnite Chapter 3, Season 4 guide: All week 10 quests and how to complete them
All Fortnite Chapter 3, Season 4 quests
‘Wordle’ today, November 29: Answer, hints, and help for word of the day (#528)
Crisis Core: Final Fantasy VII Reunion works best as a portable game
Oh no, I’m already obsessed with Nintendo Switch Sports golf