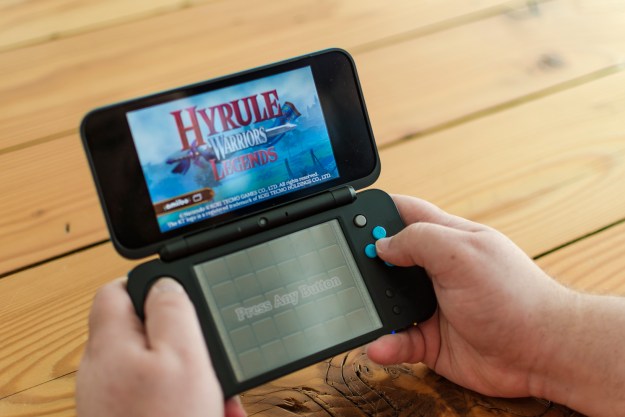 “The New Nintendo 2DS XL is the best 3DS handheld you can buy.”

How do you make a 5-year-old game console feel new again? With the release of the New Nintendo 2DS XL, a larger, more practical version of the “budget” 2DS handheld, Nintendo’s answer is simple: you don’t have to do a thing. By combining many of the signature features from generations of the “3DS family of consoles,” it gets to the heart of what makes the 3DS great. The New Nintendo 2DS XL is a fantastic opportunity for players who have missed out on the 3DS’s incredible library of games to finally jump in. If you aren’t sure if that’s something you want, our New Nintendo 2DS XL review may be able to help.

What’s in a name? Everything important

The words “New Nintendo” stems from the “New Nintendo 3DS,” a late-generation version of the 3DS with a more powerful processor. Aside from the original Nintendo 2DS, Nintendo currently sells only “New” generation hardware, so the hardware isn’t a distinguishing factor for new buyer. The benefit of a console line like the 3DS is that every game is made especially to run on this hardware. Though technical elements such as framerate and load times vary from game to game. Generally speaking, all of the games we tried on the 2DS XL ran smoothly and, most importantly, exactly as the same as they would on any other 3DS.

At this point, there are a handful of games that don’t work properly on the original 3DS and 3DS XL, and a larger number games that require a second analog stick, which you can add to early hardware with the 3DS Circle Pad Pro peripheral — but it’s, frankly, much more comfortable to use the simple, built-in analog nub found on “New” generation devices.

The new system is a “2DS” because it lacks the 3DS’ signature feature, glasses-free 3D viewing mode. It sounds like an issue, but as longtime 3DS owners, we can tell you that the console’s 3D mode never came close to living up to its promise. Not many games used it, and only a few did so effectively. Sacrificing it (and the pricey components that make it work) doesn’t feel like much of a loss at all.

The New Nintendo 2DS XL is more of a reconfiguration of past 3DS devices, than a completely new console.

The “XL” refers to the hardware’s size: More specifically, it boasts larger screens than the original 3DS model (and any model since without the XL moniker), 4.88-inch and 4.18-inch, respectively.

The 2DS XL has one other defining feature that isn’t telegraphed by its name: it’s clamshell shape. The design seems like a no-brainer: Every 3DS device is shaped the same way. The original 2DS, which remains the cheapest version of the console and has been the only “budget” option, has an inconveniently shaped hingeless design, which many have compared to an axe-head or a slice of cake. The 2DS XL simply corrects this, and many design mistakes of the original 2DS.

The New Nintendo 2DS XL largely reflects what you may have seen on other 2DS and 3DS devices. The handheld’s UI is identical to other consoles and, aside from the 3D feature, it can play any 3DS game at the same fidelity as the New Nintendo 3DS. That includes the console’s ancillary features, such as backwards compatibility with Nintendo DS and DSi games; an NFC reader for Amiibo support; and a camera capable of taking 2D or 3D photos (though you’ll need to transfer 3D photos to a 3DS to view them). The 3DS family’s “Streetpass” social meta game returns, though after six years and several updates adding premium games, its largely lost its appeal.

In an age where everyone has a smartphone, these features are largely irrelevant. Can you watch Netflix on the 2DS XL? Yes, you can, but the 2DS XL’s upper screen outputs at 400×240 pixels, considerably lower than even the cheapest smartphone. The 3DS is and has always been made to play games. To think about it other terms at this point is, frankly, foolish.

A new coat of paint

The New Nintendo 2DS does have some distinguishing marks, however. Its new design moves the evolution of the 3DS console forward.

The first, most striking element of the 2DS XL is in how it looks. Its black plastic shell with teal piping and buttons strikes a nice balance between the conservative aesthetics of phones and other general-use tech and the “fun” design of game consoles.

If, as an adult, you’ve ever been uncomfortable breaking out your Pokémon edition 3DS in public, this device definitely feels more at home among smartphones and 2-in-1s you’ll see on the bus, or at a café. (There’s also a brighter white version with orange piping, but it’s only available in Japan.)

The New 2DS XL’s hard plastic build generally feels very sturdy and well-composed, with one exception. In the open position, the console’s hinge feels loose. When jostled, the top of the console wiggles in a way that doesn’t affect your ability to play, but is unsettling. Thankfully, the hinge is not so loose that the console opens or closes on its own. So far, it’s purely a cosmetic issue.

The 2DS XL also has a panel on its bottom, which conceals the cartridge and Micro SD card ports. I’m not a huge fan of the panel — it bends awkwardly if you don’t pull it out completely, prompting a little more delicacy than I’d like — but you will never have to worry about a game cartridge mistakenly popping out the device while your game is in sleep mode. (This happened to me all the time while carrying the original 3DS in my messenger bag.)

More importantly, it makes it very easy to swap out MicroSD cards. The older New Nintendo 3DS hid the SD Card slot underneath the back cover, forcing you to unscrew it to swap cards. Swapping SD cards isn’t especially important for most players, but for specific situations, such as families with multiple children sharing a single console, or for people who want to move save data from console to another, having easy access to the SD card makes life much easier.

The New Nintendo 2DS XL seems like the best designed handheld by Nintendo in a long time. Its features reflect the wants and needs that Nintendo fans have clamored for since the original 3DS launched in 2011, right down to the fact that the devices actually comes with a charging cable. (The New Nintendo 3DS does not.)

If you’ve never thought about owning a 3DS, the New Nintendo 2DS XL isn’t going to change your mind because, let’s face it, nothing about 3DS has changed with this device. If you’re someone who has considered buying one over the years, though, it’s an inexpensive way to get a hold of an entire generation of Nintendo games, not to mention Game Boy, NES, and SNES games through the 3DS’ Virtual Console.

If you’re debating between the New Nintendo 2DS XL and the Nintendo Switch… Well that’s a different story. The Switch is a considerably more powerful console, and will be home to the bulk of Nintendo’s new games going forward. The Switch is also double the price of the 2DS XL, as are many of its games. If you want a Switch, you shouldn’t buy this as a substitute: It will not give you what you want.

This is unclear. Nintendo has announced a small number of 3DS games, which will launch between now and the end of 2017, and Nintendo of America President Reggie Fils-Aime said it will continue supporting the console “into 2018 and beyond.”

That said, with launch and success of the Nintendo Switch, it’s unlikely that Nintendo will continue supporting the 3DS line for more than a couple years. New 3DS owners should go in prepared to mine the console’s back catalog to get the most out of the hardware.

Yes. It’s a great handheld at a good price, and if you are considering buying a Nintendo 3DS, the New Nintendo 2DS XL is the version you should buy.

Best gaming laptop deals: Save on Alienware, Asus and more
MLB The Show 23 returns to Xbox, PlayStation, and Nintendo Switch this March
The best PS5 headsets for 2023
The best game-streaming services for 2023
How to fast travel in Forspoken
Star Wars Jedi: Survivor will now release in April following delay
How to get the Silver Card in Fire Emblem Engage
One Piece Odyssey’s great ending would have made for a perfect anime arc
Don’t need the Xbox Series X? The Xbox Series S is $50 off today
Tomb Raider returns as a mobile roguelike via Netflix
Samsung’s 49-inch Odyssey G9 gaming monitor is $600 off today
Rode’s NTH-100M headphones are built for gamers
The best upcoming Xbox Series X games: 2023 and beyond