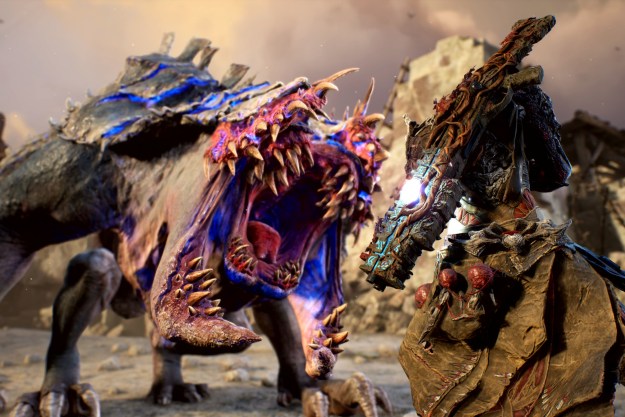 Outriders is not like Destiny … at least according to developer People Can Fly. Never mind the sci-fi looter-shooter premise. Pay no attention to those Thrall-like creatures running around in swarms. Ignore the class-based superpowers, one of which gives players a Titan slam.

Okay, it’s a bit like Destiny. Though in all fairness, it’s a lot more than that too. The cover-based third-person shooter pulls bits and pieces from a number of its contemporaries, while simultaneously resisting some of the biggest pitfalls of those games. By putting distance between itself and modern live service games, People Can Fly aims to separate the baggage from the valuable loot.

Outriders lacks personality and its edges are rougher than an octagon, but the core combat is just plain fun. Deep character customization, plentiful gear perks, and exciting superpowers all make for a slick shooter that should shine after it gets some much-needed maintenance.

Outriders has grand narrative ambitions, though they don’t quite pay off. The dystopian sci-fi story centers around humanity’s attempt to colonize one of the last livable planets in the galaxy, Enoch. Players control a titular Outrider who awakens from a 31-year cryo-sleep, only to discover that the mission has failed and civil war has broken out among the remaining humans. To make matters worse, there’s a mystical aura called the Anomaly hanging around that’s turning people into superpowered “Altereds.”

There’s certainly some potential in the setting, but it doesn’t quite come through in the dry colonization soap opera presented here.

I couldn’t tell you too much about where it goes from there, because the story is as “in one ear out the other” as it gets. There are loads of sci-fi technobabble to learn, pages of dry lore to read, and dozens of flat NPCs to meet. During one character’s big emotional beat, I caught myself asking “who?” out loud to no one.

The game lacks personality and that extends beyond the narrative. Enoch itself is a vague planet that clinically shifts between stock video game locales, from generic desert wastelands to muted green forests with splashes of colorful flora. It’d be hard to identify one of its levels out of a lineup of modern sci-fi shooters.

Outriders: Journey into The Unknown [ESRB]

The game is more successful when it plays with its otherworldly elements. Its best moments come when confronting Enoch’s alien creatures, which shake up the standard firefights against interchangeable human factions. Giant spiders, dragon-like birds, and acid-spitting bipeds bring the world to life and give a better sense of the mess humans have found themselves in. They’re more compelling targets too, requiring players to get out of cover and play aggressively.

There’s certainly some potential in the setting, but it doesn’t quite come through in the dry colonization soap opera presented here. It just feels like a dated variation on Mass Effect, the first of many associations that the studio will have trouble shaking.

What Outriders lacks in story, it more than makes up for with its action. Let’s get some more inevitable comparisons out of the way. Take the third-person shooting of The Division, the class-based action of Destiny 2, and the character-building of Diablo and you’re most of the way there. To be clear, that’s not a knock. The game does an efficient job of taking the best ideas of each of those games and seamlessly mashing them up into its own recipe.

What makes everything mesh together so well is the deep customization that enhances each combat mechanic. Shooting itself feels good, but it’s only made better by weapon perks that turn each gun into its own “exotic,” to borrow a Destiny term. There’s a lot of joy in blindly equipping a gun and firing off a shot, only to discover it freezes an enemy. It pushes players to experiment with their loadout and offers plenty of cool rewards for doing so.

On top of the standard shooting, the game has four character classes, each of which brings unique skills to the table. Tricksters can manipulate spacetime to teleport behind enemies or slow them. Pyromancers set baddies ablaze and deal damage over time. Each class is entirely distinct and comes with various skills that can be mixed and matched. Switching classes can entirely alter a playstyle, making each one worth checking out.

It doesn’t stop there. Each armor piece comes with perks too, which can further alter class skills. Then there’s a sprawling skill tree on top of that, which allows for more permanent tinkering. Out of every comparison the game warrants, the Diablo one ends up being the one that sticks the most. This is an action game that allows players to make hyper-specific builds and raise hell in so many different, satisfying ways.

Outriders doesn’t know how to tell a story, but it sure as hell can stage a battle.

Here’s a concrete example. I primarily played a Technomancer, a support class that can heal and spawn turrets. My final build involved reducing the cooldowns and upping the health on all of my turret abilities, allowing me to set up ice and poison turrets every few seconds. That let me approach combat like a tower defense mode where I could strategically place turrets around the battlefield and lure enemies into harm’s way. I couldn’t believe I had managed to create something so specific within the game. I was even more shocked that there was still so much more I could do to make that setup even deadlier.

Sometimes we crave deep, narrative experiences from a video game. Sometimes we just want to shoot a frozen dragon out of the sky with a gun that casts lightning. Outriders doesn’t know how to tell a story, but it sure as hell can stage a battle.

There’s a specific reason People Can Fly doesn’t like the comparisons to modern games. Outriders is not a Destiny-style live service game, despite looking like one. Rather than stringing players along with the promise of weekly updates, what you see is what you get. It has all the allure that comes from building a powerful character through RPG mechanics without the baggage of having to constantly keep up with updates. It’s a game that respects that players will want to play another game eventually.

There’s a bounty of strong content and ideas to help extend the game’s life past its 25-30 hour campaign. One of its more effective hooks is its World Tier system, which acts as a clever difficulty scale. Players can unlock up to 15 tiers, each of which adds additional challenges and rewards to the game. It’s an ingenious system that allows dedicated players to test their mastery and work towards a final badge of honor (and the game’s true ending).

The biggest draw is the game’s multiplayer, which lets up to three friends squad up and tackle missions together. The class system shines here, as it encourages coordinated play where each team member has a specific utility in fights. The game doesn’t have a great solution for dealing with players who are at radically different levels, but firefights are fun enough that it doesn’t matter too much.

It’s a game that respects that players will want to play another game eventually.

While there’s a lot to do, Outriders is currently in rough shape. The game’s opening weekend was plagued by crashes, bugs, and server issues that prevented players from getting their hands on it for too long. Oddly, the game features the same “always online” model that’s reserved for live service games. When servers go down, fans aren’t even able to play solo. It’s an inexplicable decision that’s already making some frustrated players want to drop it entirely.

People Can Fly isn’t being deceptive when it distances Outriders from other games, but it’s hard to blame people for drawing the comparisons. With needless live service DNA baked into it, the game is one quack short of being a duck. Just as its protagonist is torn between a human and Altered state, Outriders occupies a strange middle ground between old and new game design. It’s an identity crisis that weakens the current experience.

But did I mention that you can get a piece of armor that’ll electrify your dodge roll? Cool.

Is Outriders a sophisticated action game with a compelling sci-fi story? No. Does it feel fun to freeze a spider with an ice turret and shatter it with a well-placed sniper shot? You bet. Sometimes, that’s all one really wants from a shooter like this. It could use an offline mode for single-player sessions and a fair bit of maintenance, but it’s a solid foundation for an action game that respects its players’ time.

Gears 5 for a narrative-driven third-person shooter and Destiny 2 for a space magic looter shooter, but Outriders is a great option for those who want a little of both.

The main campaign will take about 25-30 hours with a nice serving of side quests. Multiplayer and the World Tier grind extend that time much farther.

Yes. It’s a little rough, but it’s a fun action game to play with friends. Even sweeter, it’s included on Xbox Game Pass, making it a no-brainer for Xbox owners.