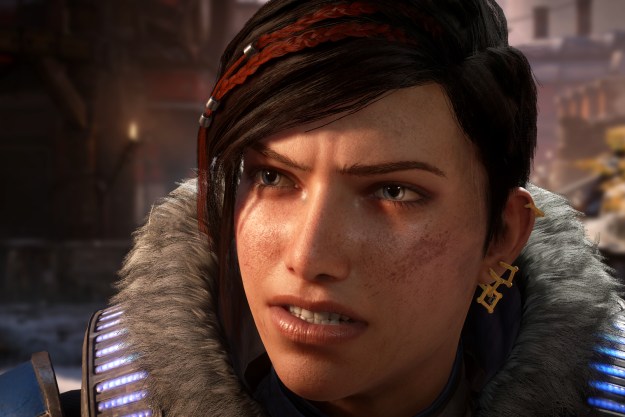 “Gears 5 is one of the best games on Xbox One, with a satisfying campaign and tremendous multiplayer.”

With its innovative cover mechanics and brutal chainsaw-equipped Lancer rifle, the Gears of War franchise revolutionized the third-person shooter when it launched in 2006. Its sequel debuted the massively influential Horde mode, but subsequent games haven’t had the same appeal of the original two. After years of iterating on the same basic ideas, story beats, and modes, however, the franchise has returned to its former glory with Gears 5. Featuring a gripping and often terrifying campaign, the return of Horde mode, vicious multiplayer, and an all-new cooperative experience that will have level creators salivating, Gears 5 adds up to one of the best games on Xbox One, and will make the year-long wait for Project Scarlett much more bearable.

Are we the baddies?

Gears 5 begins shortly after the events of Gears of War 4, which saw new hero JD Fenix reunite with his father Marcus in order to combat the Swarm threatening the planet Sera. However, the story this time around is not JD’s, but his squadmate Kait Diaz’s, who has begun experiencing bizarre and violent visions that suggest she has some connection to the Swarm and their Locust predecessors. These visions and her erratic behavior have left JD unwilling to trust her, resulting in further tension in a group already on edge after an incident involving protestors. It’s hardly the chest-thumping, us-versus-them machismo we expect from the series, but it showcases how the games have continued to evolve as the real world has changed.

It showcases how the games have continued to evolve as the real world has changed.

Civilians call Kait and partner Del “fascists” for the collateral damage the Coalition of Ordered governments has caused through its powerful Hammer of Dawn weapon, and continued revelations about the origin of COG’s enemies suggest there are always two sides to a story. The campaign’s most engaging moments, whether they be quiet emotional conversations or gigantic battles, are bolstered by brilliant performances from the cast. Chief among them is Laura Bailey, who provides Kait with a sense of empathy and terror that has rarely been so expertly portrayed in the medium.

Changes to tone aside, Gears 5 still keeps its best asset – the third-person combat – fully intact, and with a few additions to make it feel fresh. Kait and her comrades make their way through industrial buildings, icy wastelands, red deserts, and burnt-out streets, hiding behind waist-high cover and obliterating the Swarm and robotic enemies they encounter with everything from Lancers to the EMBAR railgun. It remains as satisfying as ever, with heads exploding from well-placed shots in a mess of gore and squishy noises.

No, these are the baddies

The variety of enemies you face, including “Flocks” of Swarm flying like the Sentinel horde in The Matrix, force you to displace and change up your strategy often. But you also have a another tool at your disposal to help out in these situations: Jack. A robotic drone companion, the flying helper can be controlled by A.I. or another player, and provides assistance during battles and in reaching new areas. If there is ammunition in the distance or a new weapon on top of a shelf, Jack can bring it to your location. He can also stun or damage enemies, and even freeze them solid so they can be shattered by a headshot. It seems like a silly gimmick to put the companion this front-and-center at first, but Jack is an integral part of Gears 5’s campaign, and your strategies will always involve using him properly. Whether it’s to boost your health before a fight or shock a group of enemies with an electrical trap – he’s always around to help.

Perhaps the largest change in Gears 5 compared to Gears of War 4 is the size of its world. It’s not an open-world game since you will not return to previous areas after you’ve completed chapters, but the individual maps that make up the campaign are massive. You traverse much of them on a wind-sail vehicle called a “Skiff,” and as you approach primary objectives, you’ll come across side content that offers additional insight into the state of Sera, as well as opportunities to upgrade Jack. If you want to blow these off and continue on with the story, you totally can, but none of it feels like filler. As a matter of fact, the battles you must endure are among the toughest of the game, especially the encounters with the club-wielding Warden, a mighty foe who’s capable of turning you into a mist of red in mere seconds.

Gears 5’s campaign remains just one part of a much bigger whole, and its other components live up to its high standard. Competitive multiplayer has arguably been changed the least since Gears of War 4, but it was also that game’s most successful mode. Across game types like Team Deathmatch and the respawn-limiting Dodgeball and Guardian, you and a small group of teammates push up and flank enemies using the same types of weapons and abilities you have in the campaign. Sneaking up behind a target and slicing them in half with a Lancer feels just as good as ever, and those who stick with their teammates will have the most success. As any longtime Gears of War fan knows, even the best players are no match for three enemies.

Gears 5’s multiplayer maps are exceptional for competitive battles, offering balanced layouts with plenty of opportunities for flanking and ambushes. They don’t blend together, either, with various settings including an asylum, an icy tundra, and a reclaimed barnyard. Mastering them will give you the advantage over your opponents, but they aren’t so complex that it would deter newcomers from playing, too.

These maps also work swimmingly for Horde mode, which has been altered to encourage more aggressive and proactive play than in the past. The basic formula remains intact: Place down the Fabricator box and defend yourself against waves of enemies while planting barriers and turrets. Unlike in the previous games, you no longer want to stay in the same spot all game. Special Power Taps sprout up every ten rounds, and securing them will supply your squad with more currency to use on barriers or your own characters. This requires communication, as players can easily get separated when going after them, though this does also lead to Gears 5’s Horde mode not being ideal for lone wolves. You can play it alone, but the computer-controlled teammates you’re given don’t do much other than shoot and revive you.

Progression in Horde mode is split into two main categories: Perks and Skill Cards. The former are boosts that you can acquire through the same Power currency you use in each match, while the latter are doled out as you level up your characters between matches. It’s a system that can get a little bit confusing for those used to classic Horde, especially since you can also upgrade Skill Cards to further improve their effects, but it does radically change how each character plays. If you want one character to excel in melee combat, you can equip special knife Skill Cards that boost damage, while another character can focus on improving your team’s score. There is no right or wrong way to do it, and in my experience, experimentation is encouraged.

Alongside the Perks and Skill Cards, each character also has an Ultimate Ability similar to those in Overwatch. These are also unique to each character and include things like a rocket barrage from the sky or a bubble shield. Though they won’t massively influence the course of a match, they are useful for dealing with particularly tough moments, especially when you also have Jack by your side – yes, the little robot pal is also controllable in Horde.

Despite the alterations, Horde is still a defensive mode at heart. For those more interested in bringing the fight to the Swarm, the new Escape mode is what you’ll want to play. The premise is silly in very Gears of War fashion, with a COG specialist intentionally getting swallowed and sent to a Swarm hive in order to plant a venom bomb and destroy the entire thing.

What this means for you is a race to find the exit while killing the enemies you see along the way, and it’s much easier said than done. There are four maps currently available to choose from, each with their own system of corridors and safe rooms that you can use to restock your supplies. Failing to clear an area will lead to a huge number of enemies chasing you, and sloppy play can easily result in you having no ammunition. This is truer if you attempt, stupidly, to try Escape on your own. The mode is designed for co-op, and though we managed to complete a map by ourselves, it’s clear that you should have at least one person by your side. Playing Escape mode cooperatively with a friend is also significantly more fun. Without friends, Escape does not scale down its enemy count or fill your squad with AI characters, meaning lone wolves will not really be able to enjoy the mode to its fullest.

There’s a certain Super Mario Maker quality to Escape, as odd as that sounds. Enemies will always be in the same spots when you restart an area, and your strategy for facing them can amount to muscle memory. There is also a complete level creation tool for Escape, where you can choose everything from room layout and enemies to the placement of weapons. You must beat your creations before they can be uploaded for others to play, as well, which should discourage sadists.

As with nearly every game Microsoft publishes nowadays, Gears 5 does feature microtransactions, and they take a few different forms. Certain skins and other cosmetic gear can be purchased directly with real money, or using an “Iron” premium currency. As of this writing, the prices for Iron haven’t been revealed yet, but a bundle containing 19 legendary skins for characters and weapons, as well as one banner, mark, and bloodspray, is available for $20. Boosts that double your experience can also be purchased using Iron. Nothing affecting gameplay, including Skill Cards, can be purchased for real money. Though we’d prefer for no microtransactions to be present in a $60 game, the decision to limit them to cosmetic items will at least leave everyone on an even playing field.

Gears of War 4 saw The Coalition faithfully tracing from the established Gears of War formula. Gears 5, on the other hand, shows the studio is ready to draw. A more engaging and emotional campaign introduces features we hope to see in all subsequent games, and the addition of Escape gives more aggressive players more reasons to keep coming back. Though Horde mode’s different upgrades can get a little unwieldy and we could do without the microtransactions, this is the best version of Gears of War we’ve played in years.

No. Gears 5 is among the best console-exclusive games on Xbox One, period. It innovates in both its gameplay additions and its psychological-thriller story, while its closest competitor Gears of War 4 merely iterated on classic franchise ideas.

You can tackle the campaign in about 10 hours. Horde, competitive multiplayer and Escape mode can all extend your playtime for months.

Yes, even if you weren’t the biggest fan of Gears of War 4. The improvements here are substantial.