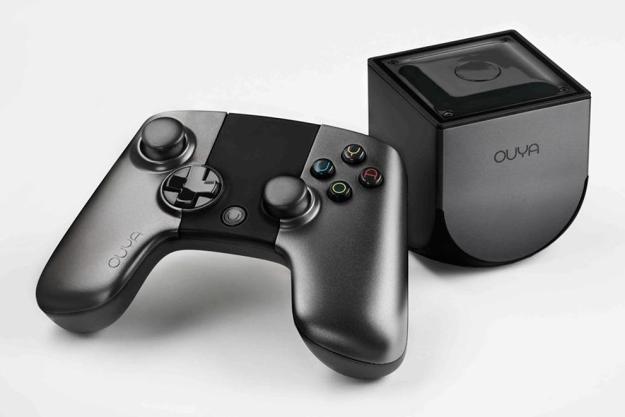 “The Ouya is a device with a lot of potential built with love, but technical issues and a weak library that may not get better for a long time limit it.”

It’s really easy to root for Ouya. The upstart, populist company borne out of a Kickstarter campaign challenges the power of the big three console makers with its plucky little gaming system built on passion and funded by the people. It’s a digital David fending off attacks from a trio of Goliaths, aided by an ocean of other devices, including handheld gaming systems, gaming PCs, and even smartphones. You have to admire Ouya’s moxie.

… if you have a new smartphone, you may already carry a more powerful gaming device in your pocket.

But moxie only goes so far, and now that the console has graduated from the hands of its Kickstarter backers to the wild world of retail, the shine has worn off and the difficult questions begin. The first among those is where does the Android-powered Ouya belong? It will never compete with the more powerful devices of current gen (or even last-gen) consoles, and tablets and smartphones seem to occupy the same wheelhouse. So can the little console that could carve out a niche for itself? Maybe, but it has a long way to go yet.

In terms of looks, the Ouya is a winner. Jawbone headset creator Yves Behar as designed a sleek and attractive device that weighs just over half a pound, and measures 3x3x3.2 inches. The plastic silver and black design is simple, understated, and elegant. It almost smirks while quietly sitting next to the louder and bulkier Xbox 360 and PlayStation 3. Of course, that smaller size is possible because it has much less power behind it. In terms of aesthetics though, it is smartly designed.

A gaming system wouldn’t be much without a controller, and the Ouya’s is modeled after the Xbox 360 controller – with a few key differences. Physically the two look fairly similar, but the Ouya’s controller has a smooth back. This is thanks to the battery compartments being placed under the controller’s two gray front panels, both of which are held in place by magnets.

The controller is square and blocky, lacking the smooth lines of the 360 controller. If that alone stops you from buying an Ouya, then go with God. The function is the important thing, and the Bluetooth connected device has gone through the development ringer. The front buttons extend up and are easy to press, while the bumper and shoulder buttons are more akin to the PlayStation controller’s than the 360’s triggers. They function fine regardless.

The two thumbsticks are stiff and the dead zone where no input is recorded is a bit bigger than most may like. This makes precision aiming tougher than it is on consoles, but it’s something you will grow accustomed to. The slightly smooth caps on the thumbsticks are prone to wear faster than concave or ridged designs, but it is a minor issue. The D-pad could use some work though, as it feels oddly unresponsive at times.

There is a notable issue with controller lag. It isn’t a constant problem, but it happens enough that I made sure to turn off any other Bluetooth devices to avoid any possible interference. It happened often enough to note it, but not so much that it ruined the gaming experience.

In general, the controller is comfortable in your hands and pairing is easy. You can add up to four controllers as well, each with the comparatively hefty $49 price tag – unfortunate for a system that prides itself on the price, but not surprising compared to other controllers.

The Ouya is a sleek and cool-looking cube filled with gamingy goodness, but the market it aims for is elusive. The Android-based system runs off of a Tegra 3 chip, which makes it as powerful as many current smartphones – not counting those released in the last three months or so. The modified Android 4.1 Jelly Bean OS runs smoother without any bloatware or conflicting apps, but if you have a new smartphone, you may already carry a more powerful gaming device in your pocket.

Poor software selection has become a recurring and troubling trend for gaming hardware launches, and the Ouya is no exception.

The Galaxy S4, for example, features a Snapdragon 600 chip. It also has a baseline of 16BG of internal storage, twice what the Ouya has, although both offer additional storage through slots. Pair a Bluetooth controller to the Galaxy S4 and connect it to your TV (through a USB to HDMI cable, or using Samsung’s “screen mirroring”) and you have a more powerful gaming system than the Ouya. Of course, a controller and a Galaxy S4 (without contract) would run you around $650 minimum. In terms of value, the Ouya is the clear winner; in terms of gaming power, there are similar, but far more powerful devices already out there, and they already have a vastly better library – but more on that in bit.

As far as performance goes, the Ouya is solid but it does have a tendency to slow down occasionally, especially in games that require constant movement like space flight sims. This isn’t a frequent problem, but it isn’t uncommon either.

Putting that aside, the Ouya is easy to use. Once you start it up, you create an account (or log in to your existing one), then register a credit card. After you are set up and you’ve downloaded a few games, playing them is as simple as highlighting one and hitting a button. Quitting is a bit awkward at times though, and only games designed with Ouya specifically in mind seem to utilize the center start button on the controller to exit. On others you just hold it until the game backs out to the main menu.

One area of concern is the downloading of games, which can be a surprisingly lengthy process, and one that you can’t easily monitor. When you choose to download a game, a progress bar appears above that title. Any other games you mark for download go in a queue, but there is no way I found to access that queue directly. If there is one, it wasn’t apparent, and it was frustrating waiting for games to download with no way to prioritize. Some of the slowdown in downloading may have been due to pre-launch status, but the lack of a download page is odd.

The software is where Ouya both soars and crashes, depending on what you are using it for. If you are a developer, the console is an amazing device that you should be all over. You can use the hardware to test your builds, and Ouya is there to help you put out your game. There is even a specific menu option set aside, and the Android system allows you access to all manner of options most casual users won’t care about, and probably shouldn’t mess with anyway. Development kits are easily obtainable, and there is no up-front cost to release on Ouya. The potential here is huge.

The software is where Ouya both soars and crashes, depending on what you are using it for.

For the average gamer though, the menus are clunky and inconveniently organized with no obvious logic. Everything is grouped into categories, much like one of the older and more primitive Netflix streaming menus that offered lots of options in no clear order. Your best bet is to find a group or a person with their own category and stick with that.

Thankfully, all of the games have playable demos, which is a huge help. The games aren’t too pricey either – most are no more than $5 – so you can afford to experiment. And you will want to experiment, because there are no clear “must owns.”

Poor software selection has become a recurring and troubling trend for gaming hardware launches, and the Ouya is no exception. In fact, it is worse than you may think, because despite the Android operating system, you can’t access Google’s Play store to download games. If you have games that you purchased via the Play Store already, they won’t transfer either.

This is a severely limiting blow. The games available on Ouya right now just aren’t worth the time, with only a few exceptions. Apps are also missing; there are only a handful available so far, like Twitch.tv. If you own an Android device already, you can’t help but feel like the Ouya is missing things it should have. If you are new to Android, you’ll still feel the void. There are ways to hack the Ouya to include this, but that is a different discussion.

The lack of Google Play and the games designed for sale on Google’s devices puts a lot of the burden on indie developers working exclusively with Ouya (or with the resources to cross-develop). Maybe that will prove to be a brilliant move, but it’s a huge gamble; then again, so is just about everything with the Ouya.

The Ouya is a bold vision realized, created by gamers and funded by gamers. But is it made for gamers? Maybe, but there are already better options available, especially to those that have a new smartphone and access to the Google Play store. The laggy controller does it no favors either.

The Ouya is sleek and elegant, and if you find a game you like (Final Fantasy III is a highlight), then the system may be worth it thanks to the relatively low $99 price tag. It also brings with it the feeling that you are supporting a young but growing gamer community, which is cool. The company has already stated that the Ouya hardware will be updated annually, which makes sense. It also gives you an opportunity to skip this generation and see where Ouya goes from here.