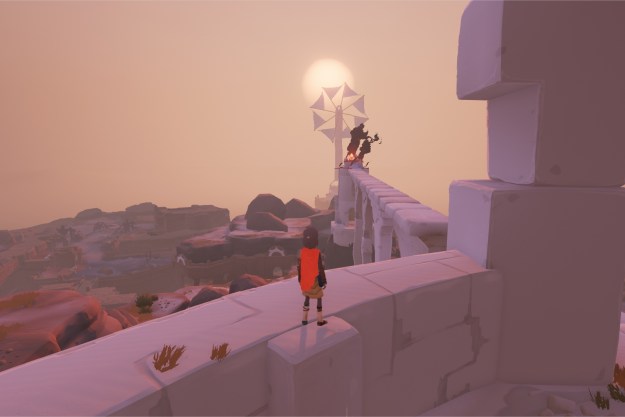 “‘Rime’ doesn’t always perfectly combine gameplay with the intended emotional journey, but it succeeds more than it fails.”

Some of the most interesting indie games of the last few years have focused on channeling the emotional power of interactive storytelling. Where AAA games have focused on recapturing the nostalgia of games from 30 years ago, or trying to squeeze the most jump scares into 20 minutes, games like What Remains of Edith Finch, Abzu, Journey and Inside have used the language of video games — running, jumping, sliding, fighting — to deliver very particular feelings.

Tequila Works’ Rime draws much of its inspiration from that well. On the surface, Rime is an action-adventure puzzle game, with climbing and running and pushing boxes into their correct positions to open doors. What it’s trying to deliver, though, is a specific set of feelings mostly captured in art direction and music.

Explaining the exact feelings and emotions Rime hopes to instill in you would take away from its journey across a gorgeous island, over a sun-bleached desert, and through a shadowy, rain-drenched necropolis. The emotional themes of the game’s five main areas aren’t clear until you complete the game and see the whole picture.

But Rime’s dedication to those themes, and its careful deployment of beautiful imagery and swelling music, is just enough to make a fun, mostly pleasant puzzle title stand out from the crowd.

Lost on a strange island

The surface-level premise of Rime finds a shipwrecked child stranded on a Mediterranean-esque island, trying to figure out what to do about the situation. Not far from where they awaken is a gleaming white tower surrounded by ruins and statues. A friendly, strangely magical fox appears to lead them to the tower, and with no prompting or dialogue at all, it’s off to solve puzzles to find the way forward.

That part of the game — the actual puzzle-solving — is competent and enjoyable, but ultimately pretty lightweight. To Rime’s credit, the game simply throws puzzle after puzzle at you — There’s no explanation given, and none necessary. The first one, for instance, brings the child into a large open space with four strange statues surrounding a fifth larger one. What needs to be done isn’t immediately clear, but look around and pillars of green light reaching into the sky will attract your attention. Wander off to find out what they are, and you’re soon climbing Uncharted-style until you reach the lights, which are actually produced by more statutes, colored in jade.

Each green statue is clearly important, but what to do with them? A quick expeRimental round of button presses and you discover that one makes the child shout. Their wordless voice carries some kind of power to activate the statues, sending a green spirit flittering back toward the five original statues. With one cleared, it’s off to find the others and surmount their challenges — like a path blocked by brambles that’s cleared by tossing fruit to lure a warthog to barrel through, or using special orbs to amplify the child’s voice and make it carry further.

These lighter puzzles work here, as they do in games like Inside, because the world carries them.

Puzzle design in Rime is smart and tight, but also not especially demanding. You’ll almost always instantly understand what the game wants of you as soon as you look around a room. If you don’t, momentary trial and error, or maybe more accurately, following the only open path, will make the next step obvious.

These lighter puzzles work here, as they do in games like Inside, because the world carries them. In some of the game’s chapters, the puzzles meld with the game’s unfolding, wordless narrative in a way that makes both feel like essential parts of the experience.

At the same time, the high points also illuminate the fact that many of the puzzles aren’t engrossing in their own right. While it is great that everything is tightly built, the puzzles sometimes unravel too easily. You’ll never have to take a step back and try to view the game in a new light, because almost every solution will be clear at first glance. When you can intuit the answer to a problem almost immediately, it makes actually going through the motions of solving it feel like exactly that: Going through the motions.

It’s what Rime does in between puzzles, and what it says through visuals and music and never with dialogue, that makes it interesting, though. Sweeping camera angles show off ruined towers and crashing waves in one chapter, and pan to capture a huge pterodactyl-looking bird swooping down to snag the child in its clutches in another.

Rime’s moment-to-moment play feels like Journey in that mix of interactivity, beautiful vistas, and rising orchestra. Rime is about the place you’re in and how it feels to be there, more than the video game elements of constantly clearing tasks. Riffing on that same Journey feel are the few characters you meet along the way, like the fox, some strange, shadowy creatures that often flee if you get too close to them, and giant two-legged robots, one of whom follows you around opening doors for a chapter.

That part of the experience works well. The slowly unfolding story of the shipwreck, of the child, and where they find themself is enough to carry the game forward, as is the mystery of the symbolism presented in each chapter. Tequila Works does a great job on presentation in Rime, and coupled with solid gameplay throughout, it’s a compelling experience.

The game might even work better with a second playthrough, once the game’s ending has had a chance to recontextualize what players have seen up to that point, in order to better track the symbolism and artistic choices made throughout Rime’s earlier levels. This might serve as a strike against it, if not for the fact that Rime can be picked up and completed in a few scant hours — it took me between three and four, although I was only making a cursory attempt at finding the game’s many collectibles, some of which expand on the story and slightly alter the endgame.

Rime is one of those game experiences that takes the traditional elements of a video game, and wields them as a tool for evoking emotion and delivering metaphor. It’s a noble ambition that can push the medium forward, and Rime achieves a lot with its art direction, its music, and the strange and interesting world it weaves. All the moving parts of the game might not add up perfectly, but Rime certainly conjures a world that’s worth a wander.

Rime falls in line with narrative-driven puzzle games, such as Limbo, Inside, Journey, and The Unfinished Swan. Players drawn to those games will enjoy this as well, as it does some smart things with its gameplay and presentation to stand among the ranks of similar titles.

Our playthrough lasted somewhere between three and four hours, but your play-time may vary depending on how much time you spend exploring the game’s world, and how easily you adapt to the game’s puzzles. If you uncover every secret, and explore every place, the game could last six hours or more.

Plus, as we mentioned in the review, the game almost begs for a second playthrough.