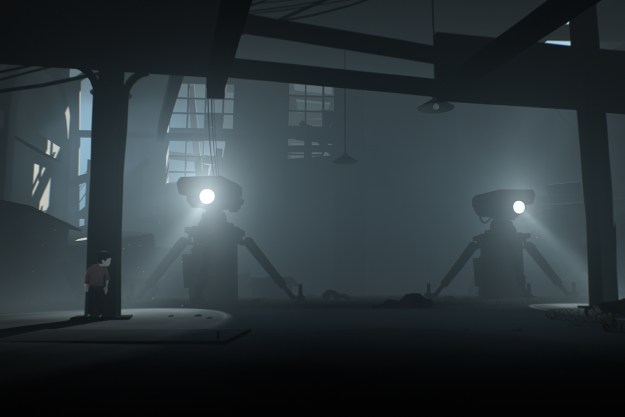 “‘Inside’ is a masterful, atmospheric puzzler, and one of the best games of the year.”

A young boy scampers tentatively through a dark forest. Hidden behind a tree, he spies people being loaded into trucks. Men with tranquilizer guns and vicious dogs are hot on his trail as he stumbles deeper into the heart of a massive facility, housing bizarre and unethical human experimentation.

Inside is the long-anticipated puzzle platformer followup to Limbo from Danish studio Playdead. If that strong pedigree and/or the above description and a few glimpses of this gorgeous game in action are enough to pique your interest, stop reading now and go play it. Inside is a delicious morsel of a game that we heartily recommend, and it’s best enjoyed with minimal context. If you need a little more convincing, or want our more specific (spoiler-free) critical assessment, then read on.

Into the heart of darkness

From beginning to end Inside remains just as unsettling as that above description of its opening minutes. The forest gives way to abandoned industrial facilities, which in turn leads to an underground research lab where things get truly strange. There are no cutscenes or audiologs here to explain the underlying narrative or lay out its themes of conformity and scientific ethics. Not a word is spoken, and no explicit context is ever provided for who you are, what’s going on, and why you are there. Instead the storytelling is entirely environmental, and the end may leave you with more questions than when you started.

As with Limbo, your quiet exploration is punctuated by moments of pulse-quickening terror — we found one particular aquatic threat from later on in the game, with echoes of The Ring, to be especially unnerving. Even at its most peaceful, however, Inside never lets up on its air of menace.

The atmosphere is so affecting because of the game’s absolutely flawless aesthetic execution. The characters, objects, and environments are often quite spare and minimal, but such that every single composition is just right, with nothing extraneous. Every airborne mote of dust feels deliberate.

The action all plays out on a 2D plane, but 3D environments and characters give it an inviting depth. Like Limbo, Inside makes excellent use of negative space for compelling compositions that invite your imagination to go wild. The visual style, with its expert use of darkness, parallax, and minimal character designs is also reminiscent of the gorgeous Kentucky Route Zero.

The attention to detail extends in less obvious directions as well, like the subtle and immaculate camera. Although it largely maintains a static, traditional, side-on platformer view, the camera subtly pans and zooms to best frame the action at any given moment. Even simple touches like when the camera switches to another room when you pass through a door feel perfectly tuned. The camerawork is delicate enough that it never calls attention to itself, while allowing for the whole experience to go down that much more smoothly.

A developer in Limbo

Playdead made a huge splash with Limbo in 2010, which was held up alongside titles like Braid and Minecraft as proof of indie games’ creative renaissance in the 2000s. Rather than flex their design muscles and show off a different kind of game, Playdead has remained squarely in their wheelhouse with Inside, which practically feels like a remake of Limbo at times.

The atmosphere is so affecting because of the game’s absolutely flawless aesthetic execution.

Both games are atmospheric puzzle platformers with mysterious narratives only hinted at through environmental storytelling. Both star young boys navigating through shadowy, hostile environments that are rife with opportunities to gruesomely die. Both start in forests and progress into industrial environments. Both play in about three or four hours.

Mind you, none of this should be taken as a ding against Playdead. Inside is a beautiful, iterative refinement of the aesthetics and gameplay from Limbo. The studio’s six years of subsequent experience is apparent in Inside’s masterfully confident and detailed execution. Inside also has plenty of its own charms and mysteries to hook even the most jaded fans of Limbo.

It all comes together

Stark visuals, a haunting sound design, affecting animations: no individual element of Inside is trying to hit you over the head with how clever it is. Instead they all blend together in a design that is remarkably confident and coherent — a real Gesamtkunstwerk.

Gameplay ideas are introduced gradually, with none overstaying their welcome. Some of the game’s challenges require a bit of trial and error to solve, sometimes leading to your untimely demise, but generously-placed checkpoints never make this an undue burden. Failing in any section that can kill you will just respawn you right before the relevant challenge, so it never feels like you have to replay sections in order to get to a particular part that stumped you.

Playing through once only takes three or four hours, which prevents replaying from the start from being an intimidating proposition. Subtle environmental details you may have missed and a bevy of secrets (which lead to an intriguing alternate ending) provide plenty of motivation for another journey through Inside’s mysterious depths.

As the gaming industry at large pushes towards increasingly sprawling epics and ongoing lifestyle games that demand hundreds of hours, Inside is refreshingly small. It does nothing revolutionary — in broad strokes it’s nearly identical to the studio’s preceding game from six years prior. Instead, Playdead has created a game that is focused and coherent, with a precise understanding of its own scope.

Whether Playdead will move on to greener pastures or if Inside and Limbo really are the one game that this studio has in them is yet to be seen, and is moreover beside the point. Inside is a testament to expert artists and technicians, willing to set aside a relentless pursuit of bigger and newer and instead deliver a nearly perfect, refined little game.

Inside is available now on Xbox One and comes to Windows PC on July 7. It was played for this review on Xbox One with a copy provided by the publisher.

Topics
The best upcoming Xbox Series X games: 2023 and beyond
The best upcoming PS5 games: 2023 and beyond
Every video game delay that has happened in 2023 so far
The best capture cards for 2023: Xbox, PlayStation, and PC
WWE 2K23: release date, editions, pre-order, and more
Despite divisive dialogue, Forspoken gets a lot right about open-world games
The best RPGs for the Nintendo Switch
How to link your Fire Emblem Engage and Fire Emblem Heroes account
Xbox and Bethesda’s Developer_Direct: how to watch and what to expect
Goldeneye 007 comes to Game Pass and Nintendo Switch later this week
The best iPhone games in 2023: 31 games you need to play right now
I can’t believe I’m recommending Forspoken on PS5 over PC
Redfall’s May 2 release date revealed during Developer_Direct