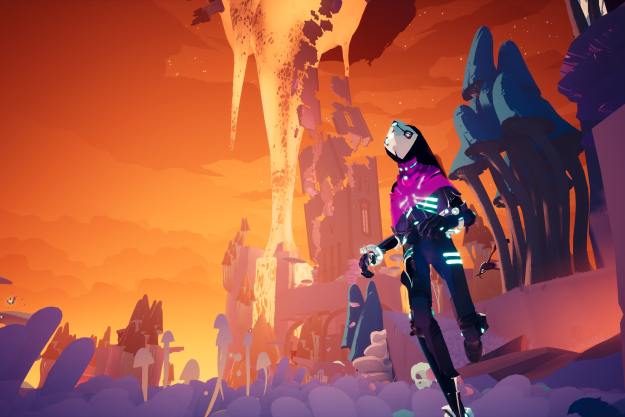 Solar Ash is a perfect example of what makes video games such a unique artistic medium: It takes inspiration and design cues from several high-profile classics but remixes them into something that’s unlike any of them — or any game I’ve ever played.

Developed by Heart Machine, the studio behind indie hit Hyper Light Drifter, several elements of Solar Ash will seem familiar at first glance. Its gargantuan boss fights bring Shadow of the Colossus to mind, while the reality-bending space exploration calls back to Super Mario Galaxy. Sometimes, the fun of video game development comes from the digital alchemy that occurs when developers start to mix beakers. In that regard, Solar Ash is a successful experiment that bubbles to life with vibrant colors and unmatched style.

Filled with memorable sequences, Solar Ash is a focused follow-up to Hyper Light Drifter that constantly inspires moments of awe. The fluid cloud-skating movement is just plain pleasurable, while towering bosses provide unforgettable set pieces that put speed and reaction time to the test. It’s a momentum-filled indie game that’s always moving, even though it skates past some finer details in the process.

Solar Ash’s world may look brightly colored, but its story is darkly apocalyptic. A massive black hole appears near a planet and starts gradually ripping it apart. While the world’s government proves useless in stopping it, a group of people called Voidrunners are deployed to activate the Starseed, a device capable of stopping a black hole. The game follows a runner named Rei as she travels around the decaying planet slaying giant monsters, which will allow her to use the Starseed.

It’s a surprisingly rich science-fiction tale loaded with history and world-building. It’s most effective when it offers commentary on real issues, like our own politicians’ inability to come together and solve life-threatening crises in a timely manner. Audio logs describe a familiar dystopia where the black hole’s emergence somehow morphed into a divisive political issue that put government reaction in a stalemate. Its story is a little less effective when it crosses into a comparatively vague meditation on individuals picking up the pieces, but it’s a good use of sci-fi as a real-world allegory.

As their name implies, Voidrunners can run — or more accurately, “skate.” The game is all about exploring the world at a fast pace with some fluid mobility tools. Holding down the left trigger allows Rei to dash around any surface like an ice skater or grind on anything rail-like, from plant roots to dismantled subway tracks floating in the air. Movement is simple to grasp but instantly gratifying. Exploration is a fast-paced ballet where players rarely ever have to stop moving. Stringing jumps and grinds together to complete platforming puzzles feels like executing a graceful dance routine.

Most of the game’s puzzles are timer-based micro-gauntlets, where Rei needs to quickly slash a few stakes and plant her sword in a giant eye before she’s vaporized by the black goo around her. These make great use of the movement mechanics, giving players little challenges in each level that test their mastery and speed. There are a few collectibles — including alternate suits and lore-deepening audio logs — strewn about the world, too, which add some optional platforming challenges to the mix for players who want some rewards for exploring.

Stringing jumps and grinds together to complete platforming puzzles feels like executing a graceful dance routine.

There aren’t a ton of extra tools, but that’s because the game doesn’t need them. A time-slowing maneuver lets Rei dash into targets from a long distance, and there’s a boost to help speed around faster. Nothing is arbitrary; everything supports the movement and helps smooth it even further. Just like Shadow of the Colossus famously reduced everything that didn’t serve its core gameplay, Heart Machine is careful not to overcomplicate what already feels good.

There’s combat in Solar Ash, but it’s secretly another mobility tool. Rei can perform a basic slash that can take out slimy, black enemies that creep around the world. Attacking is more about keeping the momentum up, rather than slowing down to clear out waves of baddies. That’s especially apparent when using Rei’s time-slowing ability, which lets her propel towards an enemy from far away. The slash has a surprisingly long range, so Rei can leap into an enemy and slice it up midair without stopping to fight.

The best marriage of combat and movement comes from the game’s boss fights. In each level, Rei comes face-to-face with a gargantuan black monster covered in bone plates called Remnants. They’re some of the biggest video game bosses I’ve ever seen, even towering over some of Shadow of the Colossus’ largest beasts. A snake-like whale, for example, floats in the air, circling decrepit apartment buildings. It’s a mesmerizing sight, and one that only becomes more impressive as you realize you’re about to skate the entire length of its bony back.

It’s a spectacle that never wears thin, only becoming more mesmerizing as the monsters get bigger.

In boss fights, Rei has to find a way to grapple onto a beast and then complete a version of the game’s stake-slashing time trials laid out across its body. In one fight, I pull my way onto a massive airborne creature. I zip up its wings, slashing stakes before I reach the tip. It flips around, sending me skating down its underside in a perception-bending instant. It’s a spectacle that never wears thin, only becoming more mesmerizing as the monsters get bigger.

Sometimes the game can’t keep up with its ambitions. The camera can get a bit unwieldy as beasts writhe around, resetting Rei’s position. There were a few fights that I had to retry simply because I had lost all sense of orientation in a nauseating camera transition. Redoing fights can be a pain too, as Rei will need to skate back over to a monster, re-grapple it, and repeat the exact same combat sequence until she nails it. I also had a few instances where I’d get stuck in the environment, forcing me to reset.

The minor technical gripes don’t detract from the sheer spectacle. Solar Ash’s bosses gave me the same “wow” moments that I felt the first time I played Shadow of the Colossus. It feels impossible that I can seamlessly transition from skating around a swamp to gliding up a 1,000-foot-tall giant’s bone sword en route to the soft spot on its head. It’s still a jaw-dropping magic trick, even 16 years after a PS2 game first pulled it off.

Colorful art direction makes Solar Ash instantly stand out in an indie game lineup. While the visuals themselves are simplistic with limited textures and detail, bright colors give the sci-fi world a true feeling of other-worldliness. The planet is bathed in bright pinks, while Rei dances across seas of light blue clouds. It’s a surrealist mood piece — an alien world encased in a neon sign.

While its influences are clear, it looks and sounds nothing like the games it’s referencing.

It’s less the vibrant visuals and more the actual world design that make Solar Ash pop, though. It takes cues from Super Mario Galaxy to create seemingly impossible spaces for players to twist around. In a later biome, I skated up and around a twisting pillar of clouds, taking me to an area hundreds of miles above what I thought was the ground. Elsewhere, deconstructed railroad tracks litter a city sky, allowing me to cleverly platform to the top of skyscrapers. The game gets the most out of its black hole premise, using the sci-fi threat to literally tear the environment apart and reassemble it into a platforming paradise.

The sound is just as impressive. Solar Ash features a fantastic score by Troupe Gammage IV (with contributions from composers Joel Corelitz and Sky Lu) that adds to the eerie sci-fi atmosphere. It’s an unsettling collection of music that underscores the celestial disaster tearing the world apart. Strong voice acting gives the world’s inhabitants life, heightening the apocalyptic stakes even further. Rei is particularly strong, as her collected attitude starts to tear itself apart as panic about her world-ending reality sets in.

It’s these aesthetic touches that give Solar Ash its own identity. While its influences are clear, it looks and sounds nothing like the games it’s referencing. Heart Machine’s signature style is fully intact here, even after ditching the 2D pixel art that Hyper Light Drifter fans are used to. The studio has crafted an intricate alien world that’s so bright and inviting, I can’t help but be angry at the powers that be in this universe that failed to protect it.

Solar Ash is a stylish sci-fi platformer that expertly weaves influences together to create something fresh. The emphasis on fast, fluid movement turns exploration into a dance-like act of pleasure. Shadow of the Colossus-inspired boss fights make good use of those mechanics, too, creating tense action set pieces with a jaw-dropping sense of scale. Technical issues can hold back the momentum, but it’s never enough to fully distract from an inviting sci-fi playground that begs to be saved.

If you’re looking for other movement-based indie games, Celeste and Ori and the Will of the Wisps are both great options. If you just want the giant bosses, the PS4 remake of Shadow of the Colossus is a must-play.

It’s a tight five to six hours in total, with a few collectibles along the way to add some extra playtime.

Yes. Solar Ash is a fast and fun platformer with a meaty sci-fi story and a handful of unforgettable boss fights.

Topics
Goldeneye 007 comes to Game Pass and Nintendo Switch later this week
The best iPhone games in 2023: 31 games you need to play right now
I can’t believe I’m recommending Forspoken on PS5 over PC
Redfall’s May 2 release date revealed during Developer_Direct
The best Fire Emblem games, ranked from best to worst
Xbox just surprise announced and released a stylish new Game Pass title
The Elder Scrolls Online’s 2023 updates bring players back to Morrowind
How to cheat in Words With Friends
Shoulders of Giants brings mascot-era nostalgia to the roguelite genre
The best PSVR games for 2023
Like a Dragon: Ishin’s Trooper Cards are full of cameos, including Rahul Kohli
How to romance characters in Fire Emblem Engage
How to eliminate enemies with no ranged weapons in Fortnite