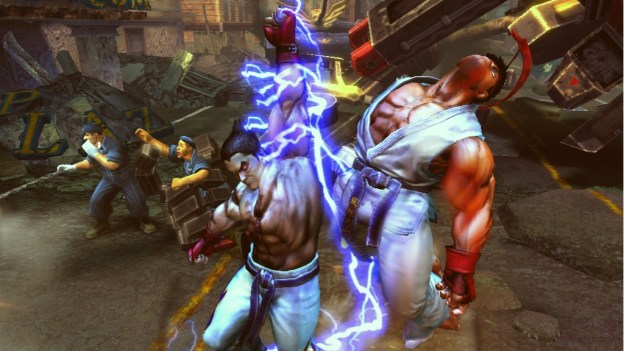 Let’s face it, folks: you’re either one kind of person or the other.

And while there’s always middle ground to be found when it comes to trivial stuff like liberal vs. conservative, your god vs. my god, or “with us” vs. “against us,” there’s one ideological struggle that’s never permitted a neutral stance.

We’re talking about Street Fighter vs. Tekken, of course.

For years now, fans of each fighting-game franchise have fought a vocal, philosophical, digital, and occasionally physical battle to prove that their franchise is the best there is at what it does. And now, with the release of Street Fighter x Tekken next year, they’ll finally be on the same battlefield.

Scheduled to hit shelves in 2012 for the Playstation 3, Xbox 360, and PS Vita, Street Fighter x Tekken received a brand new trailer this week for the kickoff of the Gamescom convention in Germany.

The new trailer puts the spotlight on the game’s combat system, which combines elements of both franchises’ longstanding control systems, combos, and strategies.