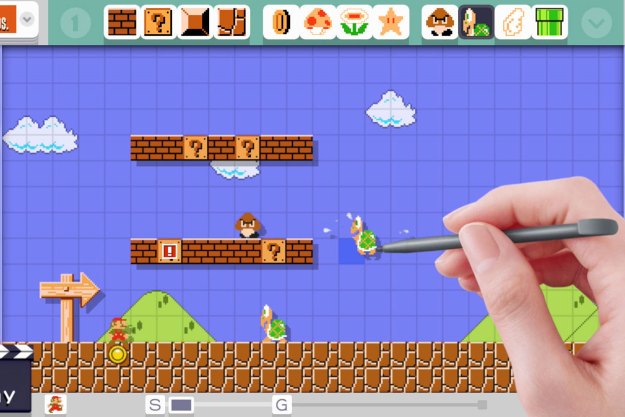 “Super Mario Maker gives rare insight into the world of game development, and could prove essential to a new generation of digital creators.”

If you’ve ever wanted to design your own video game, now’s your chance to prove yourself. Super Mario Maker gives rare insight into the world of game development, and could prove essential to a new generation of digital creators.

Super Mario Maker, a Wii U-exclusive release, allows players to create their own 2D platforming levels starring Nintendo’s stalwart plumber Mario. The game offers a wide variety of level-crafting components that players can assemble, building-block style, in order to design their own fully customized side-scrolling action game. Whether that game is a success or a flop is up to you and your level of skill.

Whether your custom-built levels are made up of sprites or polygons, they all share a distinctly polished platforming style. Classic control schemes have been reworked slightly in order to achieve parity between the various graphical skins, but for the most part, the levels you design will play out exactly like you’d expect them to. If you design a level based on Super Mario World, for instance, you can expect 16-bit graphics and era-specific gameplay gimmicks like Mario’s cape power-up. Likewise, if you design a New Super Mario Bros. U level, you’ll have access to abilities like wall-jumping and mid-air twists, extending Mario’s platforming capabilities.

As a level-creation toolkit, Super Mario Maker is sublime. It’s tuned specifically for the Wii U’s GamePad, and after some practice, creating level layouts using its touch-based interface becomes second nature. It’s simple enough that even young children can become game designers after a few minutes of play, yet robust enough that a 30-year-old Nintendo fan who has a very specific and nuanced Super Mario Bros. 3 airship level in mind can bring their dreams to life with relative ease.

It’s the Nintendo touch that makes Super Mario Maker‘s design software so infectious. A chorus of pitch-shifted voices accompanies every addition you make to your custom levels, turning the creative process into an autotuned symphony. This sounds like a minor aesthetic element, but it goes a long way in kickstarting the creative process and keeping the experience fresh after an hours-long design session.

Super Mario Maker‘s level-design component comes up short in terms of complexity, however. You can’t make slopes, for instance, giving all levels a distinctly blocky feel. Dozens of enemy types from classic Mario games are also missing in action. Players hoping to put their own spin on levels from previous Mario games will find that, in many cases, it’s impossible to fully recreate classic stages using the tools Super Mario Maker provides.

The game’s lengthy content-unlocking process is also a chore. Super Mario Maker offers only a handful of level-creation components at the outset, and additional enemies and terrain types must be earned by fulfilling vaguely stated requirements within the design studio. You’ll sink several hours into Super Mario Maker before you unlock everything, and in the meantime, the levels you craft will be artificially limited in creative scope.

Once you have access to Super Mario Maker‘s full suite of features, creation becomes much less restrictive. Created levels can be uploaded to Nintendo’s servers, where they can be shared with the world.

The best and brightest (and also everyone else)

In the week after Super Mario Maker‘s release, Nintendo fans created levels in droves, producing results that are at turns challenging, frustrating, and downright brilliant. Many subvert traditional platforming design, and some even attempt to inject narrative into what is otherwise a straightforward series of platforming challenges. The sheer variety of levels created during the game’s first month of release is a testament to its ease-of-use and flexibility.

Super Mario Maker allows players to experience these user-created stages first-hand in Course Mode, which curates levels based on popularity and user ratings. Within Course Mode, players can access the “100 Mario Challenge,” a feature that pulls a random series of user-created levels from the Internet and turns them into a traditionally structured Mario game. In effect, Super Mario Maker promises an endless supply of free Mario levels, with hundreds more released daily.

This sounds like a great proposition, but in practice, substandard user-created levels often drag down the experience. The week after launch saw the emergence of many distinct trends in level design, and not all of them work in the game’s favor.

A current favorite is the Automatic Mario phenomenon, in which users create non-playable levels that guide Mario across dangerous territory using various means of transport or physics-driven propulsion. Other levels focus on sheer difficulty in an attempt to replicate the “Kaizo” style of level design. Many armchair designers enjoy flooding the screen with choking waves of enemies and power-ups, and others troll the player with an abundance of springboards placed in awkward locations. These amateurish efforts are fun in small doses, but they become annoying with repeated exposure.

This isn’t a knock against Super Mario Maker‘s player base, mind you; first-time designers are naturally going to make mediocre levels and chase trends as they hone their craft. As a player, however, it’s not much fun to encounter multiple “Automatic Mario” levels in a row that basically demand several minutes’ worth of inaction in order to progress.

You’ll sink several hours into Super Mario Maker before you unlock everything, and in the meantime, the levels you craft will be artificially limited in creative scope.

At the moment, 100 Mario Challenge yields frustrating levels about as often as it produces stages that are actually fun to play. Super Mario Maker allows you to skip levels at any time without penalty, but a categorization system would ensure a more consistently fun experience. Using pre-defined categories, creators might brand their levels as being easy, difficult, or puzzle-oriented, allowing players to search for specific tags and find stages that they’ll enjoy. Even better, a user-defined tagging system (ala Steam) would easily weed out the more cruelly designed levels, or would at least clearly label them. In its current state, 100 Mario Challenge is one of Super Mario Maker‘s weaker elements, despite its creative potential.

Super Mario Maker is otherwise packed with a ton of great user-created levels. You can access the most popular and highly-rated stages via in-game charts, and a password system allows you to play levels created by your friends. If your 100 Mario Challenge sessions end in disappointment, you can always trawl Twitter and Internet forums for thoughtful, well-designed levels that recall the best of Mario’s classic design. It’s just a little disappointing that there’s not more overlap between these levels and the kind of stuff you’ll frequently encounter in 100 Mario Challenge.

Super Mario Maker‘s level-creation toolkit is an outstanding piece of work. While it could be more robust, it’s exceptionally well-designed, and successfully balances function with ease-of-use. Moreover, Nintendo’s over-the-top audiovisual design is effective in spurring creativity and ensuring that long design sessions are fun throughout. Hopefully, future updates to 100 Mario Challenge mode will produce levels that are as much fun to play as they are to make.