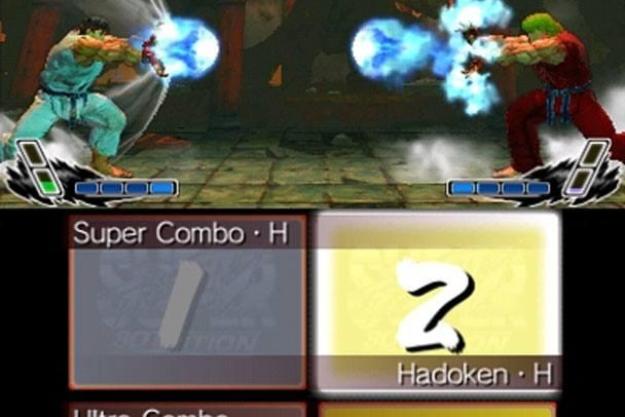 “A great example of what the 3DS can do”

By now after years and years of quality releases for the franchise, you know what to expect from a Street Fighter game. The controls will feel familiar, and many of the characters are among the most iconic in all of video gamedom. So you kinda know what to expect, at least in theory. Yet theory is all well and good, but the real question is execution, and Super Street Fighter IV 3D, or SSFIV3D as it is known to its friends, excels there.

The first thing that stands out is the graphics, which are fairly impressive for a handheld. The cartoonish style of the console SSFIV game return, and they look good on the 3DS. It isn’t the best looking game ever, but it is very good. Perhaps more importantly though is the quality of the character animations, which look fluid and natural.  The backgrounds and sound effects suffer a bit, but that is a minor concern and not all that surprising.

The game plays just as you would expect, and it is a respectable port of the console version. There are two major changes between the 3DS version and the console game. The first is the inclusion of the hotkeys on the touchpad. Four buttons appear, and each acts as a macro key that will throw fireballs, or launch special combo attacks by default, or whatever attack is unique to the character you are playing, and each button can be customized. Hardcore fans will probably see this as a cheat, but the majority of gamers, especially the younger crowd that the 3DS is really geared towards, might find it to be the best addition to the series in a while, it just depends on your experience with the franchise.

The second addition to the series is of course, the 3D. In the standard fights, the 3D is neat, but not really that useful for a fighting game that is defined by its 2D style. It doesn’t hurt, but neither will it help, and given the limited battery of the 3DS, most may just turn it off. There is a 3D specific challenge mode that puts the camera behind the back of a fighter, and it is interesting, but not very deep and probably won’t be good for more than a few play throughs at most.

The game also offer challenges and an online versus mode, which is surprisingly robust.  It isn’t surprising for longtime fans of the series to see these inclusions, but it is impressive to have them on the handheld version of the game.

If you are a fan of the Street Fighter series, you won’t be disappointed, and if you are a fan of fighting games in general, the series continues to put out quality games. SSFIV3D is among the top choices for the 3DS launch titles. The 3D itself is a bit unnecessary, but the game itself is another solid entry into the series.

Everything we know about Xenoblade Chronicles 3