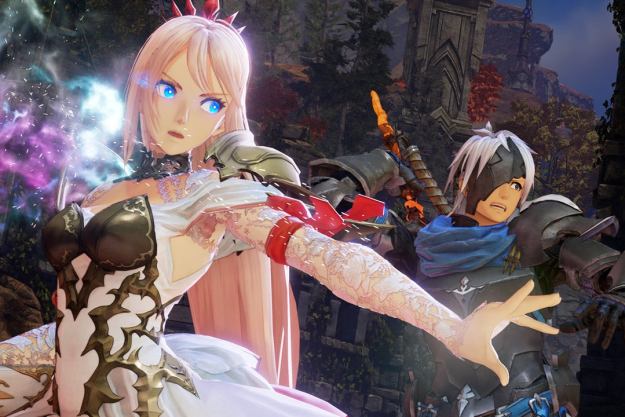 “Tales of Arise a great step toward the JRPG's evolution and a must-play for fans of the genre.”

So far, 2021 has been a great year for the Japanese role-playing game genre , and Tales of Arise only adds to a strong lineup. When I played a demo of it earlier this year, I was left wanting to explore more of the combat, characters, and story. The finished product delivers on the game’s promise and then some.

Tales of Arise is the newest entry in Bandai Namco’s long-running JRPG franchise known as the “Tales of” series. However, Arise is a unique turning point, adopting a completely new combat style and seemingly benefiting from a bigger budget (if visuals are anything to go by). That fresh feeling was palpable throughout my playthrough, reminding me of classic blockbuster JRPGs from days of yore. While the story is nothing too groundbreaking, the characters, gameplay, visuals, and themes of race and freedom carried me on a high throughout my entire adventure with the game’s standout cast of characters.

This is one of those JRPGs that entertains from start to finish, and a title that no fan of the genre will want to skip out on.

Tales of Arise puts players in control of the mysterious Iron Mask, later revealed to be named Alphen, a member of the Dahnan race who has an unusual mask stuck on his head and a lack of pain receptors. He and the rest of his race are enslaved to the technologically advanced Renans, or “Bright Eyes,” as the Dahnan people lovingly call them. These Renans are ruled over by five Lords of five regions, with each participating in a long-term game to find out who will become the most powerful lord of lords. Alphen, a group of Dahnan rebels, and Shionne, their cryptic Renan new ally, partner up to take down these rulers.

Shionne and Alphen become a powerful duo and set off on an adventure spanning all five regions of this world to take down the Lords one by one. In standard JRPG fashion, the two meet more party members, growing their numbers as they scour the regions.

The party has always been one of the main draws of Tales of games, as the series boasts “skits.” These are small comic-book style cutscenes where the characters interact with one another in conversations that unveil their quirks. The party members of Tales of Arise are so entertaining that I made sure to watch every one of these chats that I could.

The story of these races and the environments they share adds to the spectacular worldbuilding present in Tales of Arise.

As with other JRPGs, the game dips into political themes. Alphen questions what true freedom really is and ponders what his future will look like if he completes his mission of freeing his enslaved brothers and sisters. These themes, as well as the race relations between the Dahnan party members and the single Renan in the group, really stood out to me for how well written they are. As a Black player, the themes really resonate with me. I loved seeing Alphen’s range of emotions come out in the face of his oppressors. For example, he approaches a partner who shares the same blood with his oppressors with a bit of unease, but is willing to show them forgiveness, too. He’s a protagonist I can get behind.

The story of these races and the world they share adds to the spectacular worldbuilding present in Tales of Arise. I enjoyed how much the history of this world is a driving force in the adventure’s narrative progression. Despite these great pieces, I still found the game to be a bit on the generic side in terms of story. It follows the usual beats that many JRPGs do and is carried by great characters and gameplay instead. The story is still enjoyable, it just doesn’t offer anything too groundbreaking outside of its strong thematic undertones.

A step beyond Final Fantasy

The Tales of series has always been known for its combat. Players are constantly looking for new combos and techniques to pull of in game and I’m here to say that Tales of Arise will not disappoint whether you’re a casual player or a try-hard like me.

The new Linear Motion Battle System is more or less what we got in the  Final Fantasy 7 Remake with added bells and whistles. Combos are even more important in this system, giving players a few more gimmicks to play around with. For example, there are Cure Points, or CP, which limit how many healing spells players can use before they rest at an inn or a campsite, or before they use an item to replenish them.

The battles are close to the hack-and-slash style of FF7R, and feature launchers, juggles, and more classic Tales of staples that fans will be happy to see return. Artes, or spells and special attacks, also appear once again in Tales of Arise with an added rule. The more they are used in a combo, the less effective they will be. That, along with their need to be regenerated after spending AG (Artes Gauge) points to use them, adds extra strategy to combat, which is a welcome challenge.

There are quite a few super attacks that are unlocked as the game progresses. including team attacks that can be used to unleash tons of damage on an enemy and everyone around them once players hit a certain combo threshold. Boost attacks that players can use once a character’s boost gauge fills up can directly counter enemy shields and spells. They can also extend combos with added damage, and replenish the Artes Gauge. And there are solo revenge super attacks that can be unleashed once a character takes a certain amount of damage without being knocked out.

This combat is so engaging that it makes the usual RPG grind a nonissue. During my grind sessions, I found myself experimenting with how deep the combo system can get. While in combat, players can pull off character switch combos and wild laser gun juggles, use the menu to switch their move list, or instantly perform an attack mid-combo. I’m in love with the range of options available. And yes, as with the older Tales of games, players can make allies do nothing, giving them full control of the party’s actions.

The visuals bring it all together

If the weighty story and complex combat don’t attract casual players, Tales of Arise’s visuals will. The game is absolutely gorgeous, to the point where it’s one of the first games in a long time to make me think that playing on a next-gen console (should you be able to afford or find one) is completely worth it. I played on a PlayStation, so I can say definitively that you’ll still get the most out of it on either generation.

During my travels through this fantasy world, I found myself lost in the environments or even just looking at the character models for a bit after changing their outfits. Once you get to the water-filled caves and grasslands especially, you’ll see exactly what I mean. It’s a game that looks like a beautiful painting at times.

All these visuals are complemented by an amazing orchestrated soundtrack that builds on every moment, whether the party is storming a castle to take on the next lord or taking a breather by the campfire.

Tales of Arise is a games I would recommend for anyone looking for “the future” of the JRPG genre. This game could easily be Bandai Namco’s Final Fantasy 7. It feels tailor-made for the era and pushes the barriers for RPGs thanks to complex combat, weighty storytelling, and gorgeous visuals.

Tales of Arise takes around 60 hours to complete depending on how much of a completionist and battle addict you are. I’m both, so there is a good meaty game for you to enjoy here.

Scarlet Nexus and Final Fantasy 7 Remake are strong action RPGs for anyone who’s looking for some alternatives. Both games offer similarly solid combat, but stronger stories.

Yes. If you’re looking for another JRPG to join your collection or are curious about the series and need an entry point, then it’s highly recommended to hop on in.