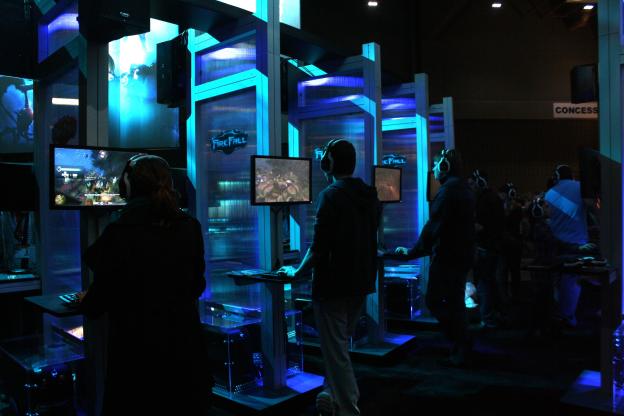 During SXSW, I had the chance to meet up with TwitchTv’s Kevin Lin and Matthew DiPietro, as well as IGN’s David Ting. They were part of the SXSW Screenburn event, which hosted professional gaming tournaments throughout the week, one of the many efforts attempting to champion the rise of video gaming as a professional sport. Ting, Lin, and DiPietro all agree that professional gaming hitting the mainstream is just around the corner.

“It’s happening really quickly,” says Lin. “The concept of e-sports has been around a good 10 to 12 years and I think last year was a really good year for the growth largely because of technology and because the people who have been trying to grow it have matured.” Lin says these advocates better understand how to treat e-sports like a business, and how to see the ecosystem as one that needs to support and involve advertisers, sponsors, players, networks, and so on.  The growth for TwitchTv alone is obvious: since launching in June 2011, the site is exceeding 16 million visitors a month, growing 11-percent a month, and users average 47 minutes of viewing time.

Ting pinpoints this evolution for me in terms I’m familiar with. He says professional gaming will be equivalent to what professional basketball is in two years, and professional soccer (speaking internationally here) in one year. The numbers are certainly good enough to suggest we’re heading this way: the two-day IPL All-Stars live event at SXSW drew 106,868 unique visitors and 596,512 video views across the three games.

When asked what titles are going to be a big part of this evolution, both Ting and the guys from TwitchTv mention Streetfighter, and Lin also points to League of Legends and Starcraft. “Starcraft is a perfect example,” says Lin, explaining it’s a great spectator game. “Real-time strategy games are just easier to understand, easier to watch. First person shooters are so popular, but the problem is that the observer perspective isn’t there yet,” he says. “It’s going to take a fundamental design change in the game to make it easier to watch, so you can zoom out and see the battlefield; here’s the sniper, here’s the rocket launcher, why are they positioned where they are?”

Of course nostalgia counts for something as well. “A lot of people grew up in America playing Streetfighter,” says Lin. “And that’s a great game to play and watch. Those are going to lead us more into the mainstream because they are so popular – it’s been around since we were children.”

He and DiPietro also point out that gameplay itself has become a media experience.

“We tend to talk about e-sports a lot because it’s really hot and it’s really interesting,” says DiPietro. “But e-sports is probably half of [TwitchTv’s] content. The other half is just people playing games, streaming their games.” He mentions that people will live stream “speed running,” in which a player speeds through a level of Mario Bros with no regard for points. “People are doing these interesting little things that generate traffic,” he says.

Don’t discount the level of celebrity that professional video gaming is bringing with it. “You look at South Korea, and the celebrities there are gamers,” says Lin. “Starcraft is bigger than soccer over there, and soccer’s huge. The pro players there make millions of dollars a year, they get endorsed by the biggest brands over there, they’re on TV, they date pop stars. They’re our equivalent of sports stars.” Apparently the U.S. will have no shortage of celebrity gamers either.

“Stephano is like a Jeremy Lin type story: Somebody coming out of nowhere and making a name for himself,” Ting says. “Idra is another good example.”

From a technical perspective, a lot of what has to happen to push e-sports into the mainstream already has. The technology has come leaps and bounds in the past few years, thanks in part to the mass adoption of live streaming. “Up until last year you couldn’t really watch a high-def stream that was affordable,” says Lin. “Even last  year a lot of people that built their own custom solutions to deliver live video at 2.5 megabits per second at a 1080p quality would be spending literally hundreds of thousands of dollars every weekend to deliver an event to 150,000-250,000 people around the world.”

Of course it doesn’t all boil down to specs. “The passionate e-sports community needs to continue to spread the word and teach people how to enjoy the game,” says Ting. “We also need sponsors to catch on, and a local hero.” He references Chris Moneymaker of the World Poker Series, who went from complete anonymity to bringing insane amounts of attention to the sport overnight. “We need someone here who goes from being a nobody to a champion and winning a lot of money to drive popularity,” says Ting, noting that an American hasn’t ever won a major global tournament.

And, obviously, it’s about money. “It’s getting sponsors, getting advertisers to feel comfortable with competitive gaming as something that they want to put their brand around.” “It’s all starting to happen,” says DiPetro, regarding market attention. “Intel spends very heavily in the space, [as do] the Red Bulls and Dr. Peppers of the world that are really interested in reaching dudes 18-25. One of the challenges is telling the story – getting them to really understand the value of the content and how insanely passionate this audience is.”

The best games on Netflix Games
The best Nintendo Switch games for 2022
Soul Hackers 2 could have been the perfect Game Pass RPG
The best multiplayer games on Nintendo Switch
Every character in MultiVersus
Splatoon 3: how to play with friends
How to link Fortnite accounts
Exoprimal: release date, trailers, gameplay, and more
‘Wordle’ today, September 21: Answer, hints, and help for word of the day (#459)
Aliens Dark Descent: release date, trailers, gameplay, and more
Call of Duty: Modern Warfare II beta has some serious pacing issues
The best Nintendo Switch shooter games
Scorn will make your stomach churn and your brain hurt