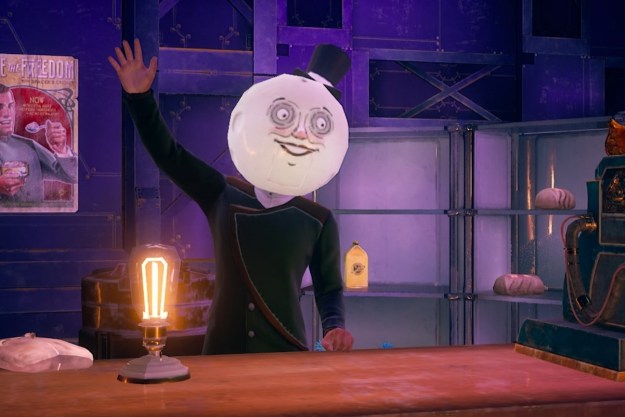 “The Outer Worlds is a fun game. It's just a shame the Switch port doesn't run better.”

Just when it seemed like the horde of poorly made, rushed Switch ports was behind us, The Outer Worlds proves there’s always room for more Nintendo Switch shooters.

News that The Outer Worlds would come to Nintendo’s incredibly popular Switch console left me cautiously optimistic. I thought it might have the polish that other Switch ports lacked, since it wasn’t trying to play catchup to the console’s success. While this version isn’t an unplayable miss, which is more than can be said of some other ports, it certainly isn’t well done — and doesn’t do the original game justice. Though it’s still made for a pretty good Switch game.

The Outer Worlds was not the most visually impressive game when it came out in 2019, but it did have a stunning aesthetic. What it lacked in character models or high-resolution textures, it made up for with wonderfully detailed planets and a cohesive look that underscored its snarky capitalist dystopia. Playing on an Xbox One X, I was amazed by its vibrant foliage, dazzling skies, and the endearing rust-buckets used as spaceships.

On the Switch, I felt like I was playing an entirely different game. The Switch port failed to meet my expectations in numerous ways and, more importantly, it fails to do the game’s unique style justice.

As I took my first steps on Terra 2, the introductory planet in The Outer Worlds, I could immediately tell this port would be rough. Still, I trekked on, convinced that I would find those psychedelic fields I was enamored with on my first playthrough on the Xbox One X. Then I realized I was in those fields. And they were not psychedelic at all.

Textures look amateur, and anything outside your immediate vicinity is a blurry mess. Besides being a major letdown, the poor visuals make it more challenging to engage in distant combat. The near-constant pop-ins often took me out of the gameplay, and I was left frustrated.

Just to be sure, I briefly revisited the game on the Xbox One X and PC to see if I was misremembering things. I wasn’t.

In fact, it was worse than I thought. Entire objects and details like bricks, shrubs, or paths are completely gone. This isn’t just about looks. Missing objects change the entire feel of the game, as I now found myself walking through a barren landscape rather than a lush planet. I lost the sense of wonder associated with exploring a new world.

Playing The Outer Worlds on the Switch should be impressive. At more than 10 GB, it takes up more space than many other Switch titles, and there are seemingly endless loading screens that suggest a game worthy of such a long wait will emerge. You can easily wait up to 30 seconds each time you enter and exit your ship or a building, and when you travel. There’s also a great deal of sputtering and lag, especially when outside.

The Witcher 3: Wild Hunt and Bioshock Infinite did it. So why can’t The Outer Worlds?

After a while, I wondered if a game of this kind with scaled-down graphics might be asking too much. Perhaps this is simply beyond what the Switch can handle. But The Witcher 3: Wild Hunt and Bioshock Infinite managed to make the leap at an acceptable level of quality. So why can’t The Outer Worlds?

The Switch port targets an unimpressive 30 frames per second, but even that feels spotty. This is especially problematic during combat, on top of the distant rendering issues. Melee combat left me swinging wildly at foes who just dodged a hair out of reach, while ranged combat was difficult due to the unresponsive frame rate. Waiting 30 seconds to respawn if you die in the middle of that chaos makes the experience even worse.

The technical issues are, on fact, insurmountable. They make it impossible to recommend the port.

Still, its worth remembering that The Outer Worlds is a great game. It’s not the best game I’ve ever played, even within the genre, but it’s a solid choice that delivers a decent story and doesn’t overstay its welcome. Fallout fans, especially those keen on Fallout 3 and Fallout: New Vegas, will love it. Obsidian, the developer behind The Outer Worlds, worked on those two Fallout titles, and it’s easy to see the connection.

The Outer Worlds brings biting wit in small details and dialogue, a wealth of characters to love and hate with equal passion, and an open world ripe for exploration. The world, or worlds, are smaller than the maps of other popular open-world games, including The Legend of Zelda: Breath of the Wild and Witcher 3, which are both on Switch. But planet-hopping is fun, and I enjoyed seeing how the worlds differed.

Even as I often wanted to power through my run because of the muddled graphics and technical issues, I still couldn’t help myself from exploring every detail. What does this terminal say? What does that message reveal about some character that’s long gone and whom I’ll never meet?

Underneath the porting issues, The Outer Worlds remains solid, and the port offers all the features and story beats of the original. It’s just a shame it doesn’t run better.

The Outer Worlds is a great open-world first-person shooter with well-written dialogue and world-building. But playing on the Switch does a disservice to the original game. It often begins to feel like a chore.

Yes. The Outer Worlds, on literally any other platform. It’s available on the PlayStation 4, Xbox One, and Windows.

Among Switch games, you can play The Witcher 3 or Breath of the Wild, though those titles are vastly different in tone, style, and many gameplay elements. There aren’t really any other games like The Outer Worlds on the Switch.

This can vary wildly depending on how far into side quests you want to go. Sticking to the main quest, you can easily clock 20 hours, but a completionist will spend closer to 40 on the game. I played for about 30 hours and was selective about which side quests and companion quests I wanted to take on.

No, you should not buy the Switch port of The Outer Worlds. Unless, and this is a somewhat specific exception, the Switch is your only gaming device and this game is up your alley. If you don’t have a PC that can run the game, a PS4, or Xbox One — and plenty of gamers don’t — then, sure. The problem isn’t with The Outer Worlds. It’s that the game so much better everywhere else you can play it. But for Fallout or FPS fans relying on just the Switch, it’s a good title to add to the library. Just be prepared for an imperfect game.

Topics
Warzone 2.0 Season 2: release date, features, and Resurgence mode
The best upcoming Nintendo Switch games: 2023 and beyond
The best upcoming PS5 games: 2023 and beyond
Every video game delay that has happened in 2023 so far
Xbox just surprise announced and released a stylish new Game Pass title
The Elder Scrolls Online’s 2023 updates bring players back to Morrowind
How to cheat in Words With Friends
Shoulders of Giants brings mascot-era nostalgia to the roguelite genre
The best PSVR games for 2023
Like a Dragon: Ishin’s Trooper Cards are full of cameos, including Rahul Kohli
How to romance characters in Fire Emblem Engage
How to eliminate enemies with no ranged weapons in Fortnite
Fire Emblem Engage gift guide: every character’s favorite gifts