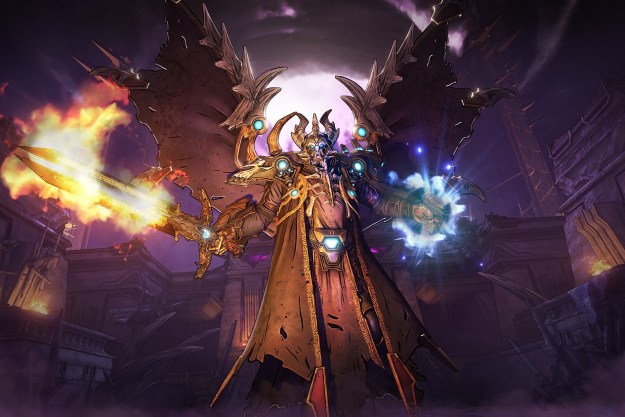 “Tiny Tina's Wonderlands is the freshest that Borderlands has felt in years.”

About a month ago, I had the privilege of previewing Tiny Tina’s Wonderlands, the latest Borderlands spinoff from Gearbox Software and 2K. What I experienced was an entirely new take on Borderlands, something that combined the looter-shooter gameplay we all know and love with RPG-like stats, classes, gear, and more. While the gameplay was fun, the characters and story in the side area I explored were not, and I was worried that this would be representative of the game as a whole.

I’m happy to say that after experiencing much, much more of the game, I can say with certainty that Tiny Tina’s Wonderlands is good. In fact, it’s really good. It doesn’t have the emotional resonance of Tiny Tina’s Assault on Dragon Keep, the Borderlands 2 DLC that holds an almost mythical status and that Wonderlands pulls its inspiration from, but that’s OK. It’s dumb, silly fun, and that has its own intrinsic value.

I’ve stopped expecting the flash-in-the-pan brilliance of Assault on Dragon Keep, and Wonderlands is better for it.

The most immediate difference between Wonderlands and other Borderlands titles is the amount of character customization players are given. Right at the start of the game, players can choose from a variety of physical looks for their character, which go as miniscule as choosing the color of their blush and the pattern on their tunic.

Wonderlands really does feel like an RPG, and it’s brought some of the best traits of the genre along for the ride.

Players are prompted to choose one of six classes and one of several traits for their character before allocating a set number of points into a Dungeons and Dragons-like stat system. I chose the Spore Warden class, which gave me a variety of gun damage and ranged skills to choose from and a mushroom companion to follow me into battle, and I named my character Muffin Top. This is very indicative of the humor to come.

I found that my class, stats, and skills had a real impact on the flow of combat in the game. Once I unlocked the mushroom companion, he was a huge help in fights — the companion A.I. is excellent, and it’s a real help if you’re playing solo rather than with a group of friends (I also can’t get over how absolutely adorable he is).

The stat increases and skill points granted at each level are also extremely helpful. Oftentimes, I would run into a new zone and get walloped, only to realize that I’d forgotten to allocate the points I’d gained from my last few level increases. Wonderlands really does feel like an RPG, and it’s brought some of the best traits of the genre along for the ride.

That’s not to say that the usual FPS combat is ignored. Shooting feels almost exactly the same as Borderlands 3: Slower than many other shooters, but smoother and easier to get a handle on for newer players. The new melee weapons are useful for when you get overwhelmed with nearby enemies, since most melee attacks knock enemies back and stagger them. I didn’t find that melee weapons made much of a difference in combat, but I was also playing a ranged and gun-focused class, so your experience with a more melee-oriented build like the Brr-zerker might be different.

One thing that feels consistently great is spells, which replace grenades in Wonderlands. They have a variety of effects, including the usual elemental hazards, health steal, and more. Some can be cast instantly, while others require players to hold down the appropriate button for a short time while the spell charges. My spells always landed where I expected them to, and they’re a great way to mix up the usual gunplay. I very much enjoyed blasting enemies back with bursts of fire or pointed icicle pieces.

While the gameplay is consistently enjoyable and interesting, the story is a little more uneven. Though Wonderlands brings back a handful of characters, most of the focus is on the new cast, who are playing the tabletop game Bunkers and Badassess with Tina in the “real world” while the player adventures in the game world. I enjoy the voiceovers a little more in the full game than I did in the preview, but they swap between funny and grating a little too frequently. If you’re not into the trademark Borderlands toilet humor and meme jokes, you might find them more annoying than anything. I was a little more interested in the Dragon Lord, the new antagonist, but he doesn’t play too much of a role until closer to the end of the campaign.

While the gameplay is consistently enjoyable and interesting, the story is a little more uneven.

As usual, the funniest parts of the game are in the tooltips, enemy quips, and player character lines. I laughed more while making my character and reading the funny class descriptions than I did during the entirety of my original preview — thankfully it seems like the side zone featured in the preview is an exception rather than the rule. You can customize the type of lines your player character says during fights and while exploring, and they’re pretty funny.

As usual, it’s also great hearing enemies’ lines, particularly their death lines. Some of the best one-liners are reserved for generic enemies as they’re on their deathbeds.

The one place where the game really stumbles is when it tries to tug on heartstrings. There are a few moments during the campaign and in sidequests that are supposed to be heavy and thoughtful rather than fast and quippy. Though they’re fairly spread out, these moments are frequently unexpected and unsatisfying. During one sidequest about a man whose son had been turned into a wooden puppet, I kept waiting for the punch line to fall, but it never did. It was just supposed to be sad, which is something you don’t really see from Borderlands titles.

The main quest also has a few moments like this, but they don’t make you think nearly as much as Assault on Dragon Keep did. I’m not saying a Borderlands game can’t deal with serious themes; I’m just saying this one doesn’t really know what to do when those feelings arise in the script.

Thankfully, Wonderlands knows exactly what to do with loot. There is a mind-bogglingly massive amount of loot in this game, enhanced not only by the new melee weapons and spells, but also by the greatly increased number of equipables found during the adventure. Players can find and equip guns, spells, melee weapons, wards (which work the same as shields in previous Borderlands games), rings, class mods, amulets, and more.

It’s a dizzyingly huge amount of things to pick up, and it turns every defeated enemy into a veritable fountain of loot. While most of it is worthless, half the fun of Borderlands is sifting through the junk to find something that’s really valuable. The item score, one of the series’ best quality of life features, makes a return in Wonderlands, and it’s a great way to quickly compare loot without having to manually compare every single stat value.

Thankfully, Wonderlands knows exactly what to do with loot.

Quests aren’t the only place you can find loot. Instead of fast-traveling to different levels and locations from a hub world, Wonderlands gives the player access to a large world map that’s absolutely chock-full of random encounter zones, sidequests, loot opportunities, dice rolls, tough battles, and more. The game actively encourages players to seek out these extra experiences, dangling loot and stat bonuses in front of them like a golden carrot.

Traveling to other locations manually is cute and makes the world feel more expansive than previous games, but movement on the map is fairly slow and clunky. The actual environments themselves are varied, and they really make you feel like you’re in a fantasy world. Enemies are pretty standard, and bosses feel like little more than bullet sponges, but that’s less important when there’s plenty of cool stuff to look at as you shoot and loot. One of Assault on Dragon Keep‘s funniest features — Tina’s on-the-fly manipulation of the game world — is on full display here.

Unfortunately, Wonderlands‘ decision to incorporate RPG mechanics means that one of the genre’s worst traits is on display alongside its better ones. This game is grindy — more grindy than any Borderlands game before it. While you don’t necessarily need to grind for good loot unless you’re looking for something in particular, you do need to grind for XP. The game’s sidequests and other activities are ostensibly “optional”, but if you want to even have a snowball’s chance in hell of being leveled enough to take on the next main story area, you really have to do them. These side zones are fun, but they’re more of the same combat as the campaign, so if you’re looking for something completely different, you’ll be disappointed.

Tiny Tina’s Wonderlands is a much-welcomed breath of fresh air for the Borderlands series. It takes on a new identity of its own and isn’t afraid to shed past associations to push the series in a new direction — a path I hope it stays on, particularly for a franchise that some believe rehashes the same old themes too many times. “Endearing” is the best way to describe Wonderlands: it constantly laughs at itself and wants you to smile and laugh along with it, and most of the time, I did. Borderlands fans and tabletop game enthusiasts in particular will find a lot to love here. Even if you’re not a longtime fan, there really is something for everyone to enjoy in Tina’s latest adventure.

If you’re looking for the best that the series has to offer, Tiny Tina’s Assault on Dragon Keep is still the absolute cream of the crop. It’s available as a stand-alone game on the Epic Games Store. Borderlands 2 is also a standout title in the series, though it lacks some of the quality of life features of Tiny Tina’s Wonderlands.

The main story isn’t too long, but there are tens of hours of extra content, sidequests, and puzzles to add more to the experience. The endgame Chaos Chamber feature also adds extra replay value.

Yes. If you enjoy looter-shooters, Borderlands titles, or RPG hybrids, Tiny Tina’s Wonderlands is absolutely worth the money. It’s a great jumping-off point for series newcomers and those who’ve avoided the franchise previously.

Topics
Everything we know about Greedfall 2: The Dying World
What are Moon Orbs in Tiny Tina’s Wonderlands?
Where to find shrine pieces in Tiny Tina’s Wonderlands
Tiny Tina’s Wonderlands classes guide: Stats, feats, skills, and more
This samurai strategy game is my new deck-builder obsession
How to connect an Xbox controller to a PC
GTA 5 cheat codes and secrets for PS4, PS5, Xbox, and PC
WWE 2K23: release date, editions, pre-order, and more
Despite divisive dialogue, Forspoken gets a lot right about open-world games
The best RPGs for the Nintendo Switch
How to link your Fire Emblem Engage and Fire Emblem Heroes account
Xbox and Bethesda’s Developer_Direct: how to watch and what to expect
Goldeneye 007 comes to Game Pass and Nintendo Switch later this week