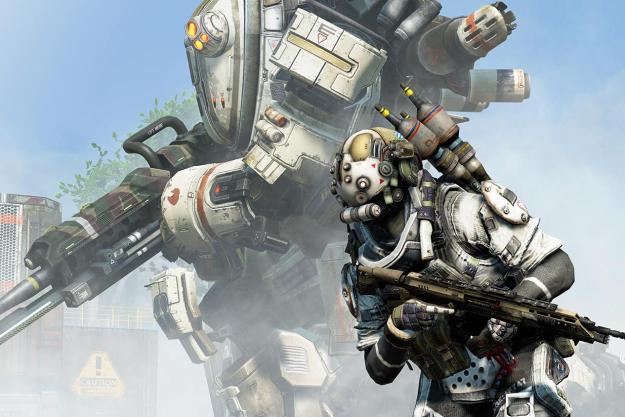 “Respawn Entertainment's Titanfall is immediately fun to pick up and play, but astonishingly short on the long-term hooks that ground most multiplayer shooters.”

The Titans may have fallen, but they didn’t exactly hit the ground running. Respawn Entertainment’s inaugural effort, Titanfall, at least earns all the hype that’s been heaped in front of it. The multiplayer shooter that pits Pilots and their Titan mechs against each other in six-on-six online battles immediately feels right when you pick up and play it. The speed, the tactility, the satisfying gunplay … it’s all perfectly polished. It is no surprise at all that most anyone who sat down to try the game in previews immediately fell for its charms.

Unfortunately, it quickly becomes clear that beyond the admittedly dazzling surface, the game lacks substance. The more you dig, the less you find. It’s no surprise that Titanfall crumbles beneath the weight of the impossible expectations placed on it, but it is a surprise that content – or lack thereof – is what it crumbles around.

Titanfall lands at the intersection between Call of Duty’s speed and Battlefield’s epic scope.

Let’s start with what works. Titanfall trumps every earlier online first-person shooter in terms of accessibility. Look at fast-paced shooters like Unreal Tournament and Call of Duty; they’re both easy enough to pick up and play, but neither is up to the challenge of making a total newcomer feel like a winner. Titanfall solves that by injecting an army of AI-controlled bots into the battlefield.

It’s difficult to overstate just what the bots do to shake up traditional team-versus-team shooter action. Players need to accumulate experience points to climb through 50 levels, and the bots supply a steady flow of bonus XP to propel players of all experience levels up that ladder. More importantly, the bots disrupt the age-old practice of camping with their ever-present, ever-annoying proclivity for shooting at you until you’re forced to fire back and give away your position.

These elements combine to keep all but the most patient players – and let’s be honest, patience is a rare thing in the shooter space – mobile, which in turn keeps the action flowing at a steady clip. There’s always something for you to shoot at in Titanfall: Sometimes it’s an actual person, sometimes it’s a three-story tall killer robot.

Ah, the Titans. What a thrill it is to cruise around the battlefield in the cockpit of a war machine that’s roughly the size of a small apartment building. The Titans move effortlessly, even gracefully, in a way that previous mech-focused video games have only dreamed of. They can’t run along walls or leap up to rooftops like the Pilots can, but they make up for the lack of mobility with an emphasis on raw firepower.

That divide speaks to Respawn’s freshest innovation: the asynchronous balance established between fleet-footed Pilots and their lumbering Titans. Titans don’t have to move to carve a path of destruction, but Pilots force them to with the threat of deadly Anti-Titan Weapons. When the two clash, a magical combination of raw chaos erupts. It lands at the intersection between Call of Duty’s speed and Battlefield’s epic scope.

Titanfall finds success in more than just the raw action. Single-use power-ups called Burn Cards create fresh opportunities to approach the game in different ways. Some put a more powerful version of a gun you might have never otherwise touched in your hands, others beef up a particular ability, or offer bonuses for targeting specific types of foes. They unlock frequently as you complete simple challenges like “Kill X number of this enemy type,” injecting some freshness into the usual level grind that accompanies most modern shooters.

Then there’s Titanfall‘s 15 death arenas, which perfectly capture the strengths of its unique gameplay. Tight tunnels and corridors funnel organically into wider, more open spaces, creating chokepoints for firefights to flare up in. Titans never feel constricted as they stomp around the huge maps, but the size is also never an issue for the Pilots because of their enhanced mobility. Like much of what works in Titanfall, the success of the map design is a product of finding the sweet spot between fresh and familiar. You’ve fought on these battlefields before, but never like this.

What a thrill it is to cruise around the battlefield in the cockpit of a war machine that’s roughly the size of a small apartment building.

How disappointing, then, that there’s so little to do. Respawn made the creative choice to focus solely on multiplayer in Titanfall, but the lack of any kind of single-player campaign or cooperative mode highlights just how little meat there is to the multiplayer offering. At launch, the game offers just five match types, and three of those are merely variations on that most traditional of versus modes, Team Deathmatch.

A multiplayer “campaign” shows some promise for mixing things up… until you realize that it’s just nine narration-enhanced matches that switch back and forth between two (of the five) match types. Stitching together a series of multiplayer showdowns with a narrative thread just isn’t enough to sell it. The stories hint at elements like alien creatures that could have been used to enhance these campaign matches, but sadly, they’re relegated to set dressing. Ultimately, calling Titanfall‘s “campaign” underwhelming is putting it mildly, especially in the context of Respawn’s mechanical achievements.

Even the thrill of progression feels muted by the dearth of customization options. You’ll gain levels at a satisfyingly rapid pace, but there’s just not a lot of variety in the stuff you unlock. With only a handful of weapons, abilities, and perks for Pilots and Titans both, there’s little reason to experiment and not a whole lot of depth to be found when you do. Burn Cards help encourage players to occasionally step away from their staples, but most will generally stick to the one or two loadouts that work for them.

There’s an argument that this diminished complexity makes Titanfall feel more accessible. Sorry, but that’s a cop-out. Respawn built a lengthy, gradual tutorial in a genre where such things have long since outlived their usefulness. It’s clear there’s a wider audience being catered to here. The simple approach to something like soldier customization feels more welcoming if you’ve never played a game like this before; you’ve got two SMGs to choose from instead of 20.

The problem is, there are those players that want their 20 SMGs, and 20 assault rifles, and so on. The finely tuned play will certainly attract those people – and it has – but it’s hard to say how long they’ll stick around. Can the raw pleasures of Titanfall‘s play mechanics and map design keep the tedium of grinding through levels with few dangling carrots at bay for serious shooter enthusiasts? That’s a quandary only time can answer, but the initial reaction is no, it can’t.

The promise of add-on content certainly helps matters, but it’s countered by the very valid argument that a game should release in “complete” form on day one. That is Titanfall‘s principal issue: The game is astoundingly fun to play, especially once your friends step in to join you, but it feels incomplete. It’s a trumped-up Xbox Live Arcade game with a whole lot of marketing behind it. Respawn ought to have spent more time teaching these Titans how to walk before letting them fall.

This game was reviewed on an Xbox One using a code provided by Electronic Arts.