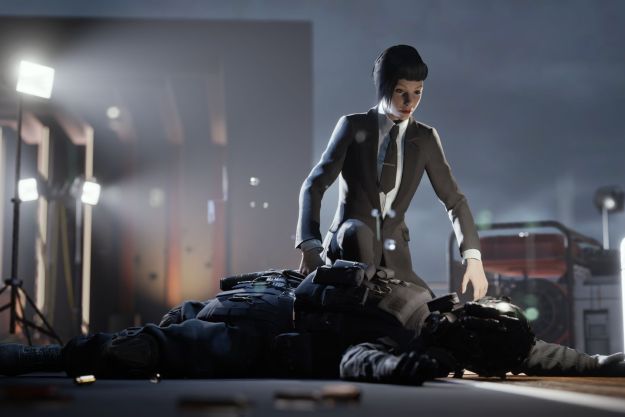 “Vampire: The Masquerade -- Swansong is an intricate narrative adventure game that can be too dense for its own good at times.”

Have you ever had a dream where you show up to class in time for a test that you forgot to study for? That’s kind of what it feels like to play Vampire: The Masquerade — Swansong if you’re not already deeply familiar with the series.

The narrative RPG from Big Bad Wolf Studio takes place in the World of Darkness, an expansive tabletop RPG universe full of vampires and werewolves. The moment players begin the game, they’re dropped into a sprawling world full of invented terminology, warring factions, and political conflicts that require a history book to fully grasp. It’s all a little overwhelming, but that’s exactly what makes the Vampire: The Masquerade series such a ripe target for a story-driven adventure. There’s a lot of blood in those veins.

Vampire: The Masquerade — Swansong weaves a sprawling vampire drama through clever tabletop RPG systems that go above and beyond your average narrative game. It’s let down by low production values and dense writing though, taking some power out of its bite.

If you’re not already a fan of the World of Darkness series, be warned: Vampire: The Masquerade — Swansong throws players right into the deep end. Within moments, I found myself right in the middle of a vampire conflict being told to me in an almost foreign language.

Literacy isn’t optional and that makes the experience less approachable.

The story takes place in an alternate version of Boston that’s populated with vampire factions hiding from the world. When one of the game’s factions, the Camarilla, is attacked, the group’s “Prince” sends three of her vampires out to investigate and find out who’s responsible. It kicks off a long and winding 15-hour story that bounces between vampire sects, secret government agencies, religious cults, and more. It’s as dense as a season of The Wire, and much bloodier.

For newcomers, Swansong isn’t the most inviting entry into the World of Darkness. When the game begins, players will find a glossary in their menu already full of terms, characters, factions, and more. When an unfamiliar word pops up during dialogue, an on-screen prompt will direct players to its menu entry. Some of those definitions are populated with other terms, which prompted me to get lost in a sort of footnote wormhole, as if I was reading a David Foster Wallace novel.

That’s always expected in a tabletop adaptation like this. RPGs like Vampire: The Masquerade have entire lore books, so you should always approach such titles prepared for a bit of a language learning curve. It’s just especially complicated here because the dialogue is the game. In something like Vampire: The Masquerade — Bloodhunt, you don’t need to understand anything about the world to enjoy its battle royale gameplay. Considering that the main hook here is choosing dialogue options, literacy isn’t optional and that makes the experience less approachable.

Though for RPG fans who already know the lingo (seemingly the game’s primary target), that won’t be an issue. Those players will be treated to a rich, albeit dryly written story that plays like a good tabletop campaign crafted by a pro game master.

Whereas some narrative games can feel limited in their interactivity, Swansong excels at turning exploration and conversation into compelling gameplay thanks to its tabletop roots. Players alternate between three different characters during the story, all of whom have their own skill trees, stat sheets, and character-specific abilities. For instance, Emem can blink jump to faraway platforms, while the pantsuit-wearing Leysha can turn invisible and transform into a doppelganger of NPCs.

Conversations are a core part of the experience and Big Bad Wolf makes sure they’re always engaging. Players have two resources that play a crucial role in chats. Willpower points are a limited resource that can be spent to increase a player’s odds of persuading someone, or “winning” a conversation. On the other hand, actions like mind control increase a player’s “hunger” meter. If a vampire gets too hungry, they won’t be able to perform Dracula-like special moves unless they lure an NPC to a safe zone and feed on them — though drain too much blood and they’ll die, permanently raising the world’s awareness that vampires exist (which in turn makes negotiations harder).

It’s an ingenious pair of systems that makes every choice more impactful. Since willpower is needed for actions like hacking safes, I was constantly weighing whether or not each decision I made was worth the resources. When I wasn’t careful, the game made me pay. In one sequence, I tried to safely extract someone from a crime scene without cops noticing. Unfortunately, I hadn’t kept an eye on my hunger meter up to that point, which meant I couldn’t simply mind control officers into turning a blind eye. I had no choice but to go on a messy killing spree, ending the scene in a spectacular disaster.

Similarly, the game ratchets up the stakes in “confrontations” where players need to win a war of words (it’s the closest the game gets to having combat and it’s a surprisingly tense substitute). Stats and skills become especially useful here, as losing a battle can have a catastrophic impact on the story. Let’s just say that some of my characters didn’t quite get a perfectly buttoned-up ending due to some mismanagement on my part. By the end, I was already tempted to start a new file and try again with some smarter builds.

The in-depth systems help pave over some of the game’s thinner pieces. Puzzles tend to be a little one-note, usually revolving around players having to find a number code to open a safe or a phone. Exploration gets more rewarding when players have the right stats needed to pick a locked door or repair a broken machine, but Swansong is a little too careful in making sure players don’t miss out if they don’t have the right build. On several occasions, I’d gleefully spend some willpower to hack into a safe or break into a door because I had the right specs. Moments later, I’d turn around and find a code or a key not too far away in the same room. Moments like that made my careful character builds feel a little arbitrary, with good stats only saving 30 seconds of inconvenience here and there.

While Swansong is flush with clever gameplay hooks, its overall production value makes it feel like a half-empty blood bag at times. I heard a lot about Boston during my adventure, but I didn’t get to see much of it. Missions take place in small, contained areas that don’t give a sense of what the larger world looks or feels like. Areas like a hospital full of identical rooms or a detail-lacking dock don’t look much different from the Sopranos PS2 video game.

Maybe it’s the series’ tabletop RPG origins talking, but too much feels left to the imagination.

Characters can feel similarly flat due to some stilted video game writing, voice acting, and animations that feel a generation or two behind. I never really got a sense of who protagonists like Emem were by the end of the day, as stiff body language and dry line reads render most of the cast wooden. Leysha is the only exception, though that’s thanks to her more emotionally charged mother-daughter story that stands out among the dry political lore.

There’s a general imbalance when it comes to details. Big Bad Wolf has gone to great lengths to flesh out its world through glossary definitions and exhaustive readables scattered throughout the world, but that energy isn’t really reflected in characters or locations. Maybe it’s the series’ tabletop RPG origins talking, but too much feels left to the imagination.

Despite its underwhelming technical aspects, I still find myself impressed by the general scale of Vampire: The Masquerade — Swansong. It’s a lengthy narrative adventure that’s eager to explore as many facets of the tabletop universe as it can. That makes the overall story feel disjointed as it crams in as much lore as it can, but it successfully got me curious about the World of Darkness setting. Swansong could be a bloody good appetizer for RPG fans who want to convince their tabletop party to let their fangs out.

Clocking in at 15 hours, Vampire: The Masquerade — Swansong is heftier than your average narrative-driven game. It tells a sprawling story set in the World of Darkness that intricately weaves bits of lore and history together into a dense vampire drama. To an outsider, its dry dialogue and in-the-weeds language can be a slog to trudge through, but smart tabletop RPG mechanics make each conversation and decision feel impactful. It just winds up feeling a little too ambitious for its britches, as its “AA” technical limitations can’t quite support the rich picture of a vampire-infested Boston it aims to paint.

Disco Elysium is the current king of the genre. If you want something more on the “AAA” side, Detroit: Become Human hits similar beats with higher production value.

My adventure took around 15 hours and I missed a fair amount of objectives and secrets during my playthrough. The game has over 30 endings as well, making it a much bigger value for completionists.

No. Fans of the World of Darkness universe will eat this up, but it’s a bit of a dense meal for those who aren’t already versed in the tabletop series’ lore.

Vampire: The Masquerade — Swansong was reviewed on PC via Epic Games Store.

Street Fighter 6: release date, trailers, gameplay, and more
The best co-op games on Nintendo Switch
Dead Island 2: release date, trailers, gameplay, and more
The best multiplayer games on Nintendo Switch
The most innovative gaming tech of 2022
Monster Hunter Rise won’t support cross-progression between PS4 and PS5
The most innovative tech products of 2022
How to interrogate enemies in Warzone 2.0
How to farm EXP fast in Pokémon Scarlet and Violet
Why I refuse to buy The Callisto Protocol on PC, even with an RTX 4090
How to evolve Primeape into Annihilape in Pokémon Scarlet and Violet
Where to find the Tactical Pistol in the Callisto Protocol
How to get a nuke in Warzone 2