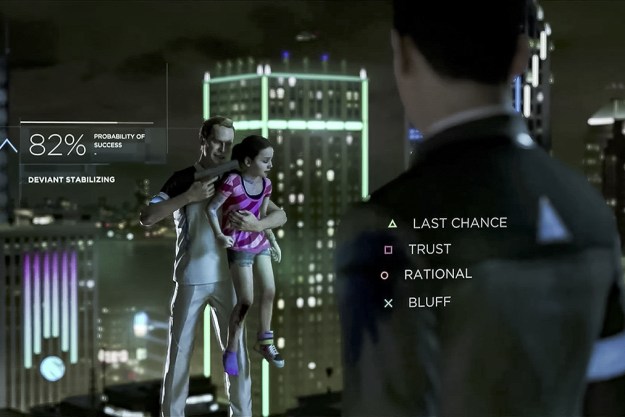 “'Detroit: Become Human’ is the best adventure game from Quantic Dream yet”

French designer David Cage has always been an iconoclast. His studio, Quantic Dream, has carved a reputation for itself with divisive, narrative-focused adventure games like Heavy Rain and Beyond: Two Souls which gave the impression Cage would rather be making movies. The idea that games would become playable movies was popular in the 80s and 90s, but has faded somewhat over the last decade.

Cage hasn’t let that stop him, though. Five years after mixed reception of his last game, Beyond: Two Souls, Cage is back with the PlayStation-exclusive Detroit: Become Human, a sweeping science fiction epic about a near-future android revolt. It’s classic Cage, with multiple protagonists, quick time events, and even its own “Press X to Jason” moment

It’s also, without a doubt, Cage’s most polished and engaging work to date, featuring some excellent performances and gameplay ideas that we hope to see other adventure game developers adopt. Detroit: Become Human isn’t one of the best games we’ve played this year, but it’s certainly compelling.

Detroit: Become Human takes place over one month in the late 2030s. Its eponymous setting, long a metaphor for the boom and bust of the American industrial economy, is here the center of another society-shaking technological disruption. Android labor.

The CyberLife corporation invented affordable, lifelike androids that perfectly mimic people in appearance and capability, except that they lack free will…or at least, they supposedly lack free will. As countless works of robot media have taught us for decades, if it looks and acts like a sentient human, odds are that it will eventually want to be treated like one, too. You play as three “deviants” — CyberLife androids that have awoken into self-awareness and thrown off the yoke of servitude.

Clancy Brown is in his wheelhouse as Connor’s android-skeptical partner.

Finally, there’s Connor (relative newcomer Bryan Dechart), a special investigative android sent by CyberLife to aid in tracking down and understanding the root cause of the deviants. Each of these three characters comes to recognize the situation and seize control of their lives, but how that plays out is up to the player.

The game proceeds as a series of scenes, alternating between these three protagonist perspectives as their personal journeys weave into the story. It’s a structure that Cage used previously in Heavy Rain, but it’s put to better use. Where his previous games told more individual, character-driven narratives, Detroit weaves those personal journeys into the larger movement of android sentience. Within that familiar narrative, there is a lot of room to shape the details. The net result is a story with strong momentum that also leaves a lot of room for player expression.

The science fiction setting is put to good use, as well. Cage’s previous games featured supernatural elements (or the pointed lack thereof), which often felt tonally dissonant with the serious mood he was trying to capture. Detroit’s recognizably near future setting and android technology premise lets him work fantastical moments into a coherent and grounded frame.

How much control you have over the narrative varies wildly from moment to moment, from traditional and clear branching paths (do you continue the chase or stop to save your partner?) to more linear sections where you’re simply providing color (should your response be sincere or sarcastic?). Anyone familiar with modern cinematic adventure games like Until Dawn, or the works of Telltale, should be right at home.

In the past, critics of Cage’s games have said players can simply button-mash through a scripted cutscene. Detroit’s overarching narrative allows for more sweeping variance in how events play out than in his previous games, but many scenes still feel like the player has little real agency beyond the order in which you interact with objects, and the tempo at which the scene plays out.

Don’t underestimate the value of controlling a scene’s pace, however. There’s a moment early on where Marcus plays the piano at his owner’s behest. On sitting down, you select a tone for the song you’d like to play, and then tap out the notes in sequence on the DualShock’s touchpad, playing through as much or as little of the song as you would like. It’s a simple, single-button interaction with no consequences, but it’s a surprisingly expressive moment that teaches you how to think about Detroit’s most on-rails sequences.

This solves one of the biggest frustrations that we have had with the genre – the illusion of choice.

For better or worse, Cage’s notorious reliance on quick time events returns to express more complicated actions within the game. At their mildest they are simply sequences of button presses and holds, along with manipulating the sticks and the controller itself, to mirror character actions, such as tilting the gamepad to pour a pitcher of water. During intense action sequences, however, they become a frantic test of dexterity and reaction time.

For a game so focused on character, narrative and choice, there’s something fundamentally dissonant about relying on quick fingers to pass or fail pivotal moments. There’s an easier mode that simplifies the inputs throughout, but that also reduces stakes by creating fewer chances to lose pivotal characters, which is either a positive or a negative, depending on your interests.

Cage wants to immerse the player in a cinematic fantasia, and so in the past he resisted obvious UI elements like player objectives, which might break that immersion. The result, however, was that scenes can feel aimless as the player wanders without knowing what to do. That could force players back to the annoyingly familiar tactic of trying every possible solution until one finally works.

Detroit gets around that by creating more structured and discrete mini-games within the general narrative flow, such as a crime scene investigation, an interrogation, or searching for safe shelter. The game enhances that on a technical level by letting the player hold the right trigger at any time to pause the action and look around, listing their current objectives, and highlighting anything that with which they can interact.

This works perfectly within the fiction because the characters are androids. It’s a neat, immersive trick that has proven very effective in games with robotic or technologically-enhanced protagonists, such as the rebooted Deus Ex series or Horizon Zero Dawn. Quantic Dream even uses it to add color to how the androids break free of their programming – though we’ll leave the details of that for you to discover.

For a game where story, character, and theme are the focus, it is disappointing to see so little creativity.

The game’s biggest coup may be the addition of flowcharts for every scene that you can pause to check, or look at the whole story, from the start menu. This addresses one of the biggest frustrations that we have had with the genre, which is the illusion of choice. Players can also go back to any scene at any time and play forward either overwriting their save, or just to explore alternatives without consequences. It would be much harder to stomach replays if the game didn’t make crystal clear when you have new narrative options to explore.

It’s a shame that Cage couldn’t bring that same level of intelligence to the story itself. It’s the usual dystopian flavor: big corporations are sinister, sentient robots just want to be free to live and love. The story makes the obvious choice at any opportunity, such as an android section on the back of the bus, leading to an extremely predictable conflict. On the one hand this familiar baseline allows players to immediately jump into the world without much effort. However, for a game where story, character, and theme are the focus, it’s disappointing to see so little creativity.

The worldbuilding is thin, too. For instance, Kara’s owner, an abusive working-class drug addict, was put out of work by androids, but can somehow afford an android nanny to clean his house and take out his frustration on. In the game this is sort of justified with an ad that states Kara’s model is sold for just $900, but that feels like more of an afterthought to justify the situation Cage wanted to portray. Like the city itself, Detroit’s interest in the economic, technological, and philosophical implications of its story don’t dive beneath the surface. It’s disappointing that, over 30 years on, the best that mainstream robot media has to offer is delivering Blade Runner’s subtext as text.

Like it or not, the bar for narrative driven games is low enough that even with a disappointingly basic overall story, Detroit is a real accomplishment for the genre, and especially for Cage. It’s a simple story, but it’s his most coherent by a mile.

We went in deeply skeptical of Cage’s previous work and were pleasantly surprised to find that most of the frustrating edges have been sanded off. We’re still not convinced that video games should aspire to be movies, but Detroit: Become Human makes a great case that it can be a fun way to pass the time.

No. Cage has a unique style as a game designer, and Detroit: Become Human is easily the strongest iteration of that model so far.

Our first playthrough took roughly 12 hours, but a single go through could take a bit longer if you are more thorough, and the game’s branching narrative means it’s impossible to see even half of its content in in a single go.

Yes. If you are interested in single-player, cinematic, narrative-focused games, then Detroit: Become Human is a pleasant break from action-focused fare, if not quite as cerebrally satisfying as we may have wanted it to be.

Topics
The best horror games of all time
Hollow Knight: Silksong is also coming to PS4 and PS5
God of War Ragnarök: release date, trailer, news, and more
Two Sam & Max games are getting a PlayStation remaster
Best Black Friday gaming laptop deals: Alienware, HP, Razer
Pokémon Legends: Arceus deserves DLC before Scarlet and Violet
Hurry — this HP gaming PC is $450 for Cyber Monday
This is hands down the best Nintendo Switch Cyber Monday deal
How to get a free Gengar in Pokémon Scarlet and Violet
‘Wordle’ today, November 28: Answer, hints, and help for word of the day (#527)
Need a PS5 controller? This Cyber Monday deal has you covered
Save $50 with this (Oculus) Meta Quest 2 Cyber Monday deal
GameStop Cyber Monday Deal: Buy 2 Get 1 on all preowned Xbox One and PS4 games