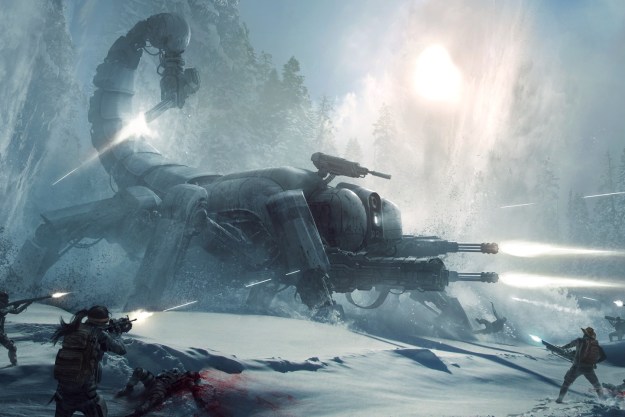 “Wasteland 3 is a rewarding game that offers unprecedented choice and is a great jumping on point for new players.”

Wasteland, the franchise that helped shape the role-playing game genre, proves once again why it’s still one of the reigning champs of tactical video games. With a robust story, a deeply explorable world, and an unprecedented level of choice, Wasteland 3 provides a great introduction for new players, both to Wasteland and tactical RPGs in general, as well as a rewarding experience for longtime fans.

Wasteland 3 continues the story of the Desert Rangers, who have traveled from the arid landscapes of Arizona to the bitter cold of Colorado. They seek the help of the Patriarch, the ruler of the former state. He has called upon the Rangers to help wrangle his rebellious children. In return, he will supply them with weapons, vehicles, personnel, and operational bases.

The story starts simply enough, but quickly spirals in a thousand different directions, offering the player numerous paths to take to either aid or potentially betray the Patriarch. Every location you visit is packed with unique characters, the stories of whom form the narrative tapestry of the game’s version of Colorado. The quests they offer can range from single tasks to multilevel experiences that either minimally or greatly affect the ultimate goal of assisting the Patriarch. They help create a natural-feeling narrative that doesn’t telegraph where its twists and turns will take you.

The game provides a great starting point for new players, but also a rewarding experience for longtime fans.

The beauty of Wasteland 3 is in how it hides its mechanics. While playing, it’s not obvious if the choice you’re about to make will have a massive effect on future endeavors or not. Unlike some games that provide clear deviations in the narrative, the structure of Wasteland 3 is incredibly subtle. It forces the player to make choices based on their moral compass rather than predicting how something will affect the game. During my playthrough, there were a handful of times where I tried to manipulate the situation into a more favorable outcome. But due to consequences from previous choices I had made, the results were often something I could never have predicted.

Unfortunately, the intricate narrative features some less than stellar writing. While Wasteland 3 is set in a grim, postapocalyptic world, it has a rather light and humorous tone, similar to the Fallout franchise, which was heavily influenced by the first Wasteland game. Wasteland 3 elicits as many chuckles as it does groans. For example, when visiting a brothel in search of a traitorous character, you have the option of paying for sex by saying to the owner, “Let’s talk about having some sexy time,” which is perhaps the least sexy thing anyone can say.

I often wished the dialogue was a little more sophisticated and didn’t read so juvenile, with characters that were written in a manner more fitting for 2020. With developers being more beholden than ever to how they construct their characters and stories, there are moments in Wasteland 3 that read as if they’d been written in 1988 when the first Wasteland installment was released. I just wish the game had applied the nuance that it wields with its structure to its writing more consistently.

Participating in the story is not a single protagonist, but a crew of them. From the jump, the player is given the option to pick from several pairings of characters or create their own pair. Each character has skills, perks, and attributes that shape who they are. Perhaps they are excellent with a sniper rifle, or maybe more skilled with weapons that are up close and personal. The level of customization is incredibly deep and means the player is constantly asked to adapt their characters to the situation or think outside the box when they perhaps don’t have the right operative for the job.

Unlike some games that provide clear deviations in the narrative … the structure of Wasteland 3 is incredibly subtle.

Early on in the game, players will then pick up two more Rangers from a predetermined list, as well as additional characters they find in their travels, and perhaps even an animal companion. The amount of humans you can have in your party at any one time is six, and you can change your crew as you go. The additional characters on your team depends on the types of side missions that become available to you as you play. Choose wisely, as some characters have much better story missions than others. I found myself becoming attached to certain companions and had to weigh my affection for them against the potential for new narrative paths and rewards that I could potentially lose out on.

Your crew will travel the wasteland, completing tasks for people, all in service of improving the Rangers’ situation. Many quests will result in combat, and for the first time in the series, your team and the enemy team will take their turns together instead of each character having their own initiative. It makes for the fastest game in the series by far, and it is a welcome addition, as it is also the biggest and longest entry in the franchise.

As you approach enemies, you will see areas of vision around them, so getting the drop on them provides a big boost to your combat advantage. There was one particular mission where I got off on the wrong foot, and I was very quickly decimated by the enemy. On my retry, I got my characters into better starting positions, and it was my foes that met a swift demise.

Many encounters will have you crossing your fingers that your most recent tactical decision will bring a deserved victory. Completion of a successful confrontation frequently brought with it a deep and satisfying sigh of relief.

If your Rangers or companions perish in battle, they’re not permanently dead. Once the combat encounter is over, you can use certain items to bring them back, or speak with the doctor back at headquarters. This is great for newer players, although it’s a shame there’s no permadeath option for those who wish for it.

Between quests, you can bring your crew back to the aforementioned HQ, a gift from the Patriarch to help in your endeavors. Your base can be upgraded over time with improved facilities and new personnel. It’s a space to regroup and re-equip gear before setting out into the frozen abyss, with it acting as an evolving physical representation of your choices on your journey. Having this allows you to better understand the consequences of your actions in the wasteland and visualize that sense of progression, something that might be lost if you simply moved from settlement to settlement.

The overhauled combat makes for the fastest game in the series by far.

Traveling between locations in the wasteland is handled via a large tank called the Kodiak, which is just as customizable as the members of your party. The overworld map is littered with hidden locations, and sometimes you will come across multiple timed events, and be forced to choose between quests knowing you’ll lose out on other activities.. I would often get lost in the wilderness, exploring every corner of the map I could, before heading to my originally planned destination.

The game offers a tremendous amount to see and do, and with it locking out certain areas and stories depending on your choices, a replay is almost guaranteed to be very different. While that value is great, I imagine only a select few might actually be interested in starting another experience lasting tens of hours, as the core progression system would mostly remain the same.

The original Wasteland was released in 1988, and its sequel launched with the help of Kickstarter in 2014.  Wasteland 3 is as much of a leap forward in presentation as Wasteland 2 was to Wasteland. The graphical fidelity is astonishing, with crisp textures and gorgeous lighting. On several occasions, my actions during combat were almost solely decided by my curiosity of what would happen visually, like using a Molotov grenade to blow up a nitrogen tank.

The music matches the visual quality with an incredible soundtrack. The score blends a bunch of different genres to form a unique sound compared to audio queues typical of postapocalyptic fare in games and films. There were moments where I’d step away from the keyboard and mouse just to listen, afraid that talking to an NPC or engaging in a quest would swap out the current track I was hearing.

Despite my qualms with some of the game’s writing, there’s no denying that the originators of the tactical RPG genre are still some of the best in the business. An almost unprecedented level of storytelling and choice, combined with an overhauled combat system and a massive audiovisual upgrade, makes Wasteland 3 one of the finest tactics games ever made.

Is there a better alternative

Gears Tactics is another excellent tactical RPG also released on PC in 2020, although it offers much less choice and has a more linear story.

For those hunting for their next RPG or tactics fix, as well as players looking to dip their toes into those genres, Wasteland 3 is absolutely worth a buy. Those looking for a short experience, particularly with a holiday season packed with games coming up, might want to wait until there are fewer new titles to play.