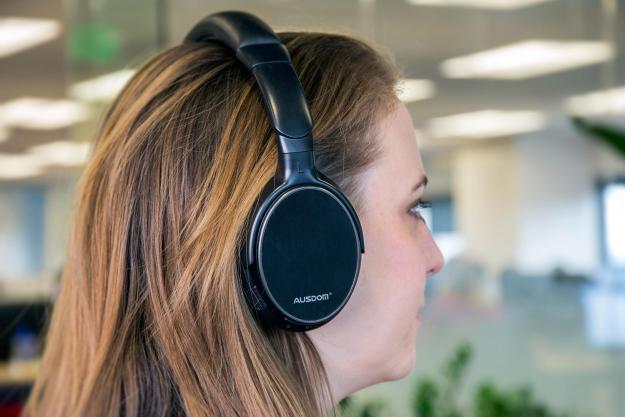 “The Ausdom aren’t awesome, but they still blow away expectations for a $50 Bluetooth headphone.”

Still, at only $50, all the Ausdom M06 had to do to get a thumbs-up from us was not suck. Indeed, the M06 do not suck. In fact, they even managed to exceed our expectations in some regards. While you shouldn’t expect the sort of balanced sound quality you would get from some more expensive headphones, what you do get is totally acceptable, making the M06 one of the cheapest (and safest) ways to go wireless on a shoestring budget.

The M06 are seriously slim on accessories. All you’ll get is a 3.5mm cable for wired operation and a micro USB charging cable – no case, carry sack, no ¼-inch adapter. As appearances go, they’re as generic and plain as can be. However, the build quality seems reasonable, particularly for such a cheap headphone. The M06 are light, but their plastic frame and hinges feel rigid and built to last. Go figure!

At a time when companies are placing more and more emphasis on appearance and fashion, the M06 run in the opposite direction. This device is not a fashion statement, or if it is, it isn’t one anyone is trying to make.

Of course, there are benefits to having headphones that don’t stand out and attract attention,  like commuting. Having plain-Jane, inexpensive headphones won’t attract unwanted attention, and for some, that can be a good thing.

If you have to remove the headphones to look at them, you might as well just pull out your source device.

The over-ear M06 feel comfortable enough when you first slip them on,  but more importantly, they stay that way over longer listening sessions — we didn’t experience any fatigue after extend periods of use. The ear cups are sized just shy of the Bose QC25, for example, but large enough to fit around most ears. Padding around the ear cups is pleasantly sufficient, and combined with a relative light clamping force, are almost forgettable. Unfortunately, that light clamping force leaves a lot to the headband to cover, so those with narrow heads may feel a little bit of soreness on their crown over time.

Our only real complaint here is with the M06’s initial adjustability and fit. The sliding headband is feels a little sticking and clunky when moved, and that makes it tough to dial in the fit just right. With a little bit of effort, however, we were able to get a fit we were pleased with.

On the bottom of each ear cup are playback buttons—play/pause, skip track, power, and volume. The M06’s control buttons feel a bit cheap to the touch, but worse is that they’re nearly worthless because they all feel the same. If you have to remove the headphones to look at them, you might as well just pull out your source device, rending the buttons useless for all practical purposes. Of course, one could eventually memorize which button is which, but we found it easier to pull out our smartphone or smarwatch instead.

Battery status was indicated on our iPhone 6, suggesting the M06 use a relatively recent iteration of a Bluetooth chip. The included 400mAh Lithium-ion battery is rated for up to 20 hours of use, though we found playing music at a higher volume chopped that down to about 16 hours – still respectable for such an inexpensive headphone.

The best thing about the M06’s sound quality is that they don’t do anything offensive. Treble has a bit of sparkle but is never harsh or grating; the midrange is a little recessed but vocals still come through with clarity; and the bass, while not especially deep, has a bit of punch to it. The headphones offer just enough dynamic range that they don’t sound flat, though you shouldn’t expect much in the way of soundstage or dimension.

We do have one gripe that pickier listeners should take note of, though: That “punchy” bass comes at a cost. The upper bass/low midrange has this sort of “one-note” quality to it that persists through nearly every genre of music. For some, this will be a non-issue, but we’d be remiss if we didn’t mention it. Again, though: 50 bucks!

Using Josh Garrels’ newest album, Home, as one of the prominent test subjects provided movement on the low-end, plenty of plucking of strings, and Garrels’ wonderfully dynamic vocals. We also used D’Angelo’s latest, Black Messiah, among others, but Home from Garrels is a rich album that sounded great on the M06.

One surprising disappointment: poor noise isolation. We were surprised by this considering the feel of the earup material, but after closer inspection, we noticed that the M06 fail to provide a good seal around the ear, and with enough slits for sound to slip through, plenty gets in and  out. While at a coffee shop, people and communal music were clearly audible where other headphones would have dampened the sound easily. And even though the headphones are closed back, they shed a good deal of their output, making them easily audible in quiet environments.

Usually, price is directly tied to quality of sound, but in this case, the scale doesn’t match up. For $50 you get some really solid-sounding headphones, almost as a bonus, happen to be wireless.

You won’t get the stylish good looks pricier competitors offer, and noise isolation is certainly not a strong suit, but if you’re less concerned about appearance and more concerned with price, the Ausdom M06 are worth your attention, if not your money as well. They’re a great way to add a pair of wireless headphones to your collection without breaking the bank.

The best cheap headphones and earbuds for 2022
Best Amazon Echo Deals: Get an Echo Show for $40
Soundcore’s latest earbuds steal some of Apple’s smartest features
LG prices its Flex, StanByMe TVs, and debuts a new model that doubles as magazine rack
How to watch The Weather Channel without cable
Samsung just dropped a massive 98-inch Neo QLED mini-LED TV
How to hide a channel on YouTube TV
Audio-Technica is celebrating its 60th birthday with a $9,000 phono cartridge
This 65-inch QLED TV from Samsung has a massive discount
How to watch Miami Dolphins vs. Cincinnati Bengals on Thursday Night Football
Amazon Prime Video’s Thursday Night Football stream bad for some, again
The 50 best movies on Netflix right now (October 2022)
The 68 best movies on Amazon Prime Video (October 2022)