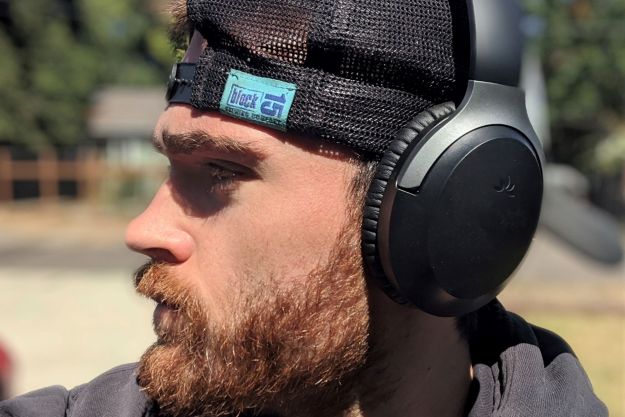 “The Aria Pro hit a sweet spot of features versus price, and succeed as work-centric headphones.”

Avantree is sailing in uncharted waters with its Aria Pro wireless headphones. There just aren’t a lot of headphone makers willing to float around in the space between budget models from brands like JLab Audio and more highly regarded cans by the likes of Sony and others.

By that definition, the $100 Aria Pro could be seen as an ambitious set of headphones, armed with active noise cancellation and stellar codec support and aimed at stealing fans of products both above and below them. Of course, it’s how well Avantree’s new cans — which the company doesn’t explicitly say are geared toward the office lifestyle, but sure seem to be based on the features they offer — live up to that definition that will determine how they’ll fare. That’s what I’m here to find out.

The Aria Pro arrive in straightforward packaging: A white box with the headphones tucked into their carrying case. Accompanying the headphones and its case are a few accessories, including a detachable boom microphone, a 3.5mm audio cable, a micro USB charging cable, and the usual documentation. The most notable part here is that boom mic, which gives these headphones an immediate advantage in workplace situations. I’ll get to that in a moment.

Powering the headphones on is as easy as toggling the power button on the bottom of the right earcup, which automatically sends the Aria Pro into Bluetooth pairing mode. The rest of the connection process is standard and, from my time testing these headphones, the Aria Pro seamlessly reconnected each time I powered them on.

With modern headphones and earbuds, my expectation is to be able to move around my house, or into the backyard for a few quick chores, all while maintaining a strong connection to my phone sitting inside on its charger. The Aria Pro and its Bluetooth 5 technology passed that test with flying colors, as most newer listening devices tend to do.

Especially for $100 headphones, the Aria Pro struck me as reliably built cans. They lack the elegance of more expensive models like the Razer Opus, but they are comfortable, flexible headphones. Even after taking into consideration a few nuances, if you can accomplish those two design feats at this price point, that’s a win in my book.

The Aria Pro are outfitted with what Avantree calls “protein leather” earpads, and I admittedly have had better-feeling cups over my ears. But these do provide a nice level of comfort to wear for extended periods of time. They swivel 90 degrees, which allows the headphones to lay flat on your collarbone and have a reasonable range of motion in terms of tilting forward and back. The headband is a little sharper in some areas than you might want them to be, but they feel durable on top of being fully adjustable. This is all to say these headphones should fit most people well, and they should feel reasonably comfy doing so.

These headphones should fit most people well, and they should feel reasonably comfy doing so.

There are a small army of buttons, inputs, and switches included along the bottom of each cup on the Aria Pro. You’ve got your power switch, volume and track controls, and USB port along the right cup, and your ANC switch, call controls, mic control, and auxiliary port on the left. It’s quite a lot of buttons at your disposal, but after a day or two of using them, I adjusted to the complex control panel of the Aria Pro. I did have a couple of issues with phone calls that first day because I hadn’t read the part of the setup manual about unmuting the boom mic when plugging it in. Take that as your warning, as it’s a little embarrassing to leave your local dog daycare center hanging because they can’t hear you frantically fiddling with your headphones to try and get your audio to work on the other end.

The Aria Pro seem to land in an odd middle ground as far as features go. On one hand, they have a few features that are more advanced than pricier alternatives. On the other, they’re outdone by cheaper headphones in a few other categories. It will ultimately come down to what matters to you most, of course, but it’s worth finding out exactly where these cans position themselves amid the competition.

Avantree says the Aria Pro can play for up to 15 hours with active noise cancellation on and up to 24 hours without it being activated. That’s a fine battery range, until you realize the JLab Audio Studio ANC offer 28 hours of playback with ANC, and 34 without. The JLab cost $40 less than the Aria Pro, making the latter’s battery life seem like far less of a value comparatively.

The Aria Pro do have a rather impressive list of supported audio codecs for their price range, including aptX, aptX HD, and SBC. That arguably gives them a leg up on products like the Sony WH-CH710N, which support SBC and AAC codecs but lack aptX capabilities. It once again comes down to your specific situation and which codecs better suit you, but having that range of support for $100 is unquestionably a solid selling point for the Aria Pro.

The Aria Pro do have a rather impressive list of supported audio codecs for their price range, including aptX, aptX HD, and SBC.

Finally, the Aria Pro support multipoint connection Bluetooth, allowing you to pair your headphones to both your phone and a work laptop simultaneously. It may not sound like the most groundbreaking feature, but being able to field a call, then seamlessly dive back into the content you were watching on your laptop is a helpful feature to have in a pair of office-focused cans. By comparison, it took Sony until the just-released WH-1000XM4 to include this feature in its flagship headphones. You can get the same thing in the Aria Pro, for $250 less. You’re just, you know, missing everything else that makes the XM4 incredible.

Once more, the Aria Pro land in between the competition. Before I break it down, here’s a short summary: The Aria Pro sound better than budget cans like the JLab Audio Studio ANC but fall well short of options like the Razer Opus and Sony WH-CH710N.

That’s not necessarily a bad thing for the Aria Pro since they do come in at half the price of both the Sony and the Opus. It’s forgivable that they lack the clarity of those higher-end headphones, and understandable that they don’t deliver quite as well at either end of the frequency range. It’s not a disappointment that you won’t get remarkable fidelity for $100, butthese headphones sound fine, which is precisely how well they needed to sound given their focus.

Call quality, meanwhile, is a somewhat fickle subcategory. With the boom microphone attached, the conversation was clear on both ends. When I detached the boom mic, and relied on the smaller microphone on the headset itself, then went for a walk, however, conversations with the same folks were easily infiltrated by my environment. They could still hear me, but they could also hear everything else, including the steps I was taking. I understand these headphones were geared more toward an office or professional setting, and I think they will serve that purpose well with the attached boom microphone, but just be wary that when you step out into the bustling sounds of the world, you’re subjecting your calls to those very same sounds.

I described the active noise cancellation of the JLab Audio Studio ANC as a “no-frills feature,” and I’d likely use a similar description for the Aria Pro — with a caveat. Just like with those JLab headphones, the ANC in the Aria Pro is an on-or-off option, without a way to adjust the level of noise cancellation. However, the Aria Pro do a significantly better job.

I wouldn’t call this a surprise, since more expensive headphones should traditionally be able to better implement a feature like ANC. The Aria Pro has a much more noticeable effect on dampening the sounds of your environment, taking away the harsher outside noises that would otherwise penetrate a quiet work-from-home space. They do have a slight white noise effect to them, and they don’t do as well when thrust into louder situations like walking down a busy street. But for use in an office, I think these headphones excel, especially at their low price point.

For better ANC features, you’ll have to spring for something more substantial like the Razer Opus, or the top-of-the-line Sony WH-1000XM4. The Aria Pro pale in comparison to each of those. But, as you can imagine, you’ll be paying a whole lot more to get that to that level of quality.

Avantree made a pair of work-savvy headphones in the Aria Pro that have the necessary features to succeed in that role, and just enough qualities to make them a suitable set of commuter cans — whenever commuting becomes an actual component of society again. Their features are best utilized in a work environment, though, which kind of shoehorns them into that niche position. They can venture outside that space, but your results may vary.

You can save some cash with the $60 JLab Studio ANC, which offer better battery life but have worse audio quality and active noise cancellation. Or you can double down and get something like the $199 Razer Opus, which for $100 more improves upon the Aria Pro in most areas — you’re just spending twice as much for the privilege.

The Aria Pro have a one-year warranty, with the option of tacking on an additional 12 months if you register your headphones. That, in addition to durable build quality, should give you the confidence to wear these daily without fear of them faltering.

Yes. The Avantree Aria Pro are just average in a few areas. But when you look at the complete picture, they offer quite a lot for quite an affordable price. If I had $100 to spend on headphones to both boost productivity and enjoy a podcast after work, these would make my short list.

Topics
The best QLED TVs for 2023: bring on the brightness
BluOS will be updated to 4.0 with a fresh look, new features
The best ultra short throw projectors for 2023
Best 4K projectors for 2023
Samsung accidentally reveals price of its 77-inch QD-OLED TV
The best OLED TVs for 2023: from LG, Sony, and Samsung
The 50 best movies on Netflix right now (January 2023)
The best movies on Amazon Prime Video (January 2023)
The best new shows to stream on Netflix, Hulu, HBO, and more
The best TV shows on Amazon Prime right now
Best new movies to stream on Netflix, Hulu, Prime Video, HBO, and more
The best shows on Peacock right now
The best thrillers on Netflix right now