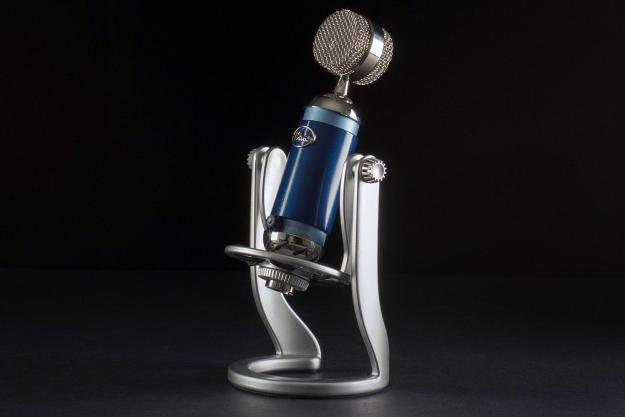 “When it comes to plug-and-play demo recording, we can’t think of a mic we’d rather have in our arsenal.”

It wasn’t long ago that making a quality recording, even for a demo, required a lot of expensive gear. We’re talking a four-track recording system (employing this strange material called tape), microphone pre-amps, a microphone, cables, etc. Even for a basic setup, users could easily get into the $500-1,000 range before they laid down a single note. But thankfully, that’s all in the past.

Advancements in digital technology have forever changed the art of recording, and nothing illustrates that point quite as succinctly as the new Spark Digital mic from Blue Microphones ($200). Going beyond the convenience of a USB mic, the Spark Digital is a fully functional condenser mic that will plug directly into your iPhone or iPad, getting you ready to rock before you’ve even lifted your guitar from the stand. And the best part is, it sounds pretty good, too.

Pulling the Spark Digital from its cardboard locker yielded little indication that it was any different from a standard condenser mic. Its stout metal frame and signature Blue lollipop diaphragm pull directly from its sister device, the original Spark. However, closer inspection revealed a micro-USB input where an XLR connector would normally reside, letting us know that, yes, it’s the future, and no, this mic is not built with a conventional recording studio in mind.

The Spark Digital feels fairly sturdy. However, when we pulled it from the box, the rear windscreen popped off, requiring us to wiggle it back into place. Given its delicacy, those who plan on taking this mic on the go may want to rig up some sort of hard case, as Blue only provides a felt bag for travel.

Inside the bag, we found two Y-cables, both with a fork at one end for a 3.5mm headphone input, as well as the input jack to connect to the bottom of the mic. However, the first cable is terminated with a USB port for Mac and PC connection, while the other offers a Lightning jack for hooking straight into your iPad or iPhone. Also in the bag was a screw-on shockmount/desk stand, with the ability to position the mic forward or back on its axis.

Additional accessories available from Blue include a shock mount for a standard mic stand ($55), a 30-pin cable ($15), and a pop filter ($15), the latter of which is all but a necessity if you plan on doing any vocal recording.

As previously mentioned, the Spark Digital looks nearly identical to its cousin at the exterior, flashing all of Blue’s funky design glory. The striking design recalls extremely high-end mics from Blue, like its $6k Blue Bottle.

The Spark Digital shares other traits with the original Spark as well, using the exact same electrical components, and the same condenser diaphragm – the point at which sound waves from the source are captured by the microphone.

Yes, it’s the future, and no, this mic is not built with a conventional recording studio in mind.

Before we get to the rest of the features, here’s a quick explainer of the term ‘condenser’ we keep throwing around. Unlike dynamic microphones (your average stage mic), the diaphragm of a condenser mic is much more complex. It uses a magnetized plate which picks up vibrations in the air, allowing for a more sensitive and accurate response to vocals and instruments alike. Until recently, condenser mics usually required a pre-amp with 48-volt phantom power to fire up their inner components.

As a condenser, the fact that the Spark Digital has the ability to pull all the power it needs from you iPhone is all the more impressive. Of course, it also means this baby will put the hurt on your device’s battery in a hurry. In other words, if you’re taking this mic to do recordings on the go, don’t forget your iPad or iPhone’s charging cable – you’re gonna need it.

Like Blue’s Nessie before it, the Spark Digital’s controls are succinct and relatively easy to use. A small dial on the front acts as a central control hub, performing a variety of functions. Once the mic is plugged in, the dial lights up blue, which means it’s ready for raising or lowering volume. Holding the dial in for three seconds switches to orange backlighting, letting you know you’re ready to control input gain. Tapping the dial mutes the system.

By design, the mic is extremely speedy to set up, allowing you to quickly dial the volume and gain levels you desire. Unplugging the mic will auto-reset gain and volume levels – an issue that could be troubling for engineers and musicians who want to return to a session at a later date. However, for better and for worse, the increments of control for both volume and input gain are so limited, it’s pretty easy to pick-up where you left off.

Of course, the downside is there’s a lot less control over input gain than you’d find on a traditional setup, which means you have fewer choices for sensitivity when it comes to recording a source, and fewer levels of volume control, leading to instances of volume being too low at one stage, and too loud at the next. Such are the ills of an idiot-proof, plug-and-play system: you take the good with the bad.

The only other control on the mic is the Focus switch on the back. The switch is designed to offer a boost in presence in the higher registers when engaged, and a boost of low end when turned off. We found the former sounded good for crisp, clean guitar, while the latter was better for adding a richer body to vocals. For those interested, Blue offers a frequency pattern chart for the mic, which is remarkably flat, marking a fairly transparent overall reproduction of sources. The system tops out at CD quality audio resolution, and offers a frequency response of 20Hz-20kHz.

When you connect the mic to your iPhone, iPad, or PC, the system sources the output through the Y-connector to your headphones before it runs through the recording app, allowing latency-free playback. That means you won’t hear that false chorus effect on vocals, or the mistimed click of string picks that was once common for cheaper USB-powered audio components.

Here’s where the mic really earns its keep. As long as you’re using a recording app that allows for outside hardware, the Sparks Digital automatically takes over as the input and output source for sound on an iPad or iPhone. Apple’s built-in voice memo app, for instance, does not work with the mic, but the free Garageband download (which we used for testing) does. Simply plug the mic in, pull up the app, and lay your music or podcast down.

If you’re using your Macbook or PC, it’s a little more complicated – but not much. For Macs, simply open the System Preferences tab and choose Sound. Then assign the Sparks Digital for both Input and Output. For Windows, select the Control Panel, and Sound. Then choose Sparks Digital as the Recording source, and Playback source. The manual suggests keeping the input level at 80 percent unless you’re recording something extremely delicate and sensitive, but you can play around with it to find your happy place.

Other than a lack of more granular control over volume and gain, we have no complaints. This microphone was a joy to use for impromptu recordings, as well as for video chatting, and even musical collaboration over the web.

When inspiration strikes, simplicity is the name of the game, and can mean the difference between building a great song, and losing a good idea. While we’ve always been able to use our phone for VERY basic tracking, having this supremely simple way to make guerilla recordings we’d actually want to listen to was awesome. And that last point about listening is key – if you lay down a cool idea, and it sounds like crap, it may fall by the wayside. If your rough demo sounds decent, it can be inspiring to keep building – that’s where this mic shines.

While we had our doubts about the Spark Digital’s audio performance going into this review, we came out impressed with its ability to deliver some surprisingly gorgeous sound – especially for its asking price. We mostly recorded guitar and vocals in a relatively well-controlled recording environment, i.e. a converted bedroom with plenty of sound diffusion.

The microphone is fairly sensitive, and offers a wide recording pattern which means, for instruments like acoustic guitar, you can pretty much place it in the general vicinity of your sweet spot and get some good tone. The attack has a bit of bite, and the resonance of notes is a little on the bright and silvery side, especially with the Focus feature turned on. Still, lining the unit up between the neck and the body of our Takamine acoustic rig made it easy to get a sound we were pleased with.

The Spark Digital was a joy to use for impromptu recordings.

With the included desktop stand, it’s much easier to track guitar and vocals together, and we got enough clarity, and body in both instruments to satisfy when we did so. However, we were able to get much better vocals – with a surprising level of detail and sensitivity – by snuggling up to the mic and tracking separately. Doing so created a lot of pop noise with P’s and B’s, and we had to rig up our standard pop filter to make a palatable recording (as we said, a pop filter is a must). Still, we managed to coax some good sound from vocals with this little rig.

That being said, we must warn that, while the Sparks Digital is excellent for demo work, it may not be able to grow with you to the next level. Cranking the gain to the level we required brought up the noise floor to clearly audible levels, revealing a lot of white noise. Add a few noisy plug-ins, and you’re bound to run into clarity issues anytime the music gets low. Then again, as evidenced by the lack of an XLR output, going pro isn’t really what Blue Microphones had in mind for this device. And for $200, you get a lot of mic for the money – way better than your basic Skype mic.

While Blue’s new Spark Digital microphone may not be ready to take center stage in your prosumer recording studio, it gets closer than we expected. And when it comes to plug-and-play demo recording, we can’t think of a mic we’d rather have in our arsenal. Even a few years ago, a mic of this caliber that works with your iPhone would be hard to imagine. With a great interface, good sound, and incredible mobile versatility, Blue’s Spark Digital makes for an enticing addition to any mobile musician’s arsenal.