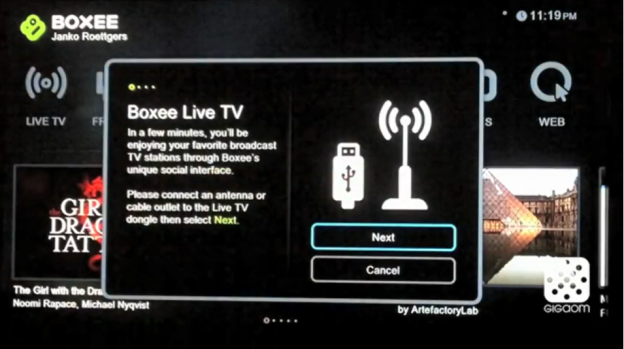 Looks like the Boxee Box is getting an upgrade that will allow users to tune into live television. By using a special USB dongle, users will be able to switch between live HD TV signals and online content with ease.

GigaOm discovered the upcoming feature by obtaining an unreleased build of the Boxee 1.5 update. The live TV icon sits prominently in the left corner of the Boxee home screen; the window promises “your favorite broadcast TV stations”. After clicking the icon, users input country, zip code and then a program guide is downloaded. GigOm couldn’t proceed further from the channel scanning as instead of the official dongle they improvised with an EyeTV One USB tuner.

An interesting part of the Boxee’s live TV integration, found by combing through the settings, is an option to “enhance my experience by sharing my viewership data with friends”. It’s not exactly clear what that may mean as far as social span. but its worthy to note that Boxee currently allows sharing videos among the platform’s users as well as Facebook and Twitter networks.

No more needing to switch inputs. Also, there are signs that point to users being able to access basic unencrypted cable, though that is something best left for an official update. GigaOm believes the integration will be rolled out in the weeks; considering the version they came across was almost in its final form, it may be out by holiday shopping time.

Google TV also offers live broadcasts but you need a box attachment from cable providers to access content. Aside from the live TV, Boxee recently added Spotify to its music offerings. With Online content, television and music Boxee is looking to take over your living room.

Topics
SiriusXM now has an app for Vizio TVs
The best soundbars 2023: which should you buy?
The best noise-canceling headphones for 2023: Sony, Apple, and more
Bose Music Amplifier takes a direct shot at the Sonos Amp
How to watch Puppy Bowl 2023
BluOS will be updated to 4.0 with a fresh look, new features
Samsung accidentally reveals price of its 77-inch QD-OLED TV
The best QLED TVs for 2023: bring on the brightness
The best OLED TVs for 2023: from LG, Sony, and Samsung
The 50 best movies on Netflix right now (January 2023)
The best movies on Amazon Prime Video (January 2023)
The best new shows to stream on Netflix, Hulu, HBO, and more
The best TV shows on Amazon Prime right now